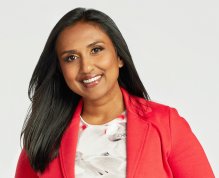 Shallima Maharaj is an award-winning journalist with Global Toronto. She joined the team in 2017, after reporting extensively throughout western Canada.

She has provided comprehensive pandemic news coverage over the past two years on equitable vaccine distribution, urgent calls for paid sick leave, combatting misinformation, and hospitals pushed to the brink by mounting COVID-19 cases.

Shallima has covered a diverse range of stories across the country.

She has been a key part of live federal and provincial election coverage, and other major news events.

In 2018, she reported extensively on the Yonge Street van attack, its impact on the community, and mourning the lives of those lost.

In 2019, she was on the ground in flood-ravaged Bracebridge, Ont. Later that year, she was part of team coverage of the Toronto Raptors championship run.

More recently, she produced a three-part series marking 20 years since 9/11. One installment told the harrowing story of a Canadian first responder who rushed to the scene without hesitation. Another focused on families still grappling with the immeasurable loss of loved ones.

While at Global Edmonton, Shallima was part of the RTDNA award-winning team that provided continuous coverage of the Fort McMurray wildfire, as well as the worst mass murder in the city’s history.

She has reported, anchored and produced in Prince Albert, Regina, Saskatoon, Edmonton and Toronto. A graduate of Ryerson University, she avails herself of every opportunity to learn and grow.

When she is not out searching for leads, Shallima is spending time with family and friends. She currently lives in Toronto with her husband and their English bulldog.

She is an outdoor reveler, a lover of brunch, relishes good strong coffee, and travel to new destinations.