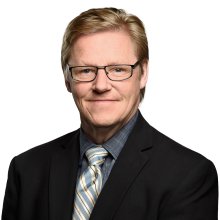 Ross Lord is a Senior Digital Broadcast Journalist and Global National‘s Atlantic correspondent, based in Halifax.

Lord joined the media business in 1984, after realizing it might be better than a “real job.” And on most days, it is. After working for six years in radio news and sports and, he switched to cover court and legislature beats for MITV in Nova Scotia (the predecessor to Global Halifax) before becoming assignment editor for Global Maritimes in 1995.

Since joining Global National in 1998 (when it was known as First National), Lord has covered a wide range of stories throughout the four East Coast provinces and beyond. From floods, fires and fossils, to snowstorms, submarines and shopping, Lord relishes visiting new nooks and crannies and the compelling stories to be told there. His job has taken him underground to coal mines, underwater in submarines and in the air in military helicopters.

He also covered the 60th anniversary of the D-Day landing in Normandy, Canada’s mission in Afghanistan, the aftermath of the horrendous 2010 earthquake in Haiti, NHL lockout talks in New York and the Moncton RCMP murders in 2014.

For Lord, the best part of working at Global National is the freedom to pursue leads on stories that sometimes, but not always, work out.

He also loves the feeling he gets from exposing issues Canadians are not aware of and stories that matter to viewers. He is grateful to work for a team at Global National that demonstrates compassion; not only to its news coverage but also to its own people.

With increasing competition and advancing technologies, a good story is still the trump card. That’s what Lord is chasing.