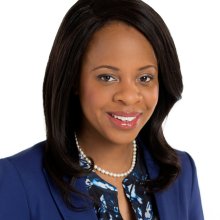 Nadia Stewart’s love for news has taken her from coast to coast. These days, you’ll find her both in-front and behind the camera for Global BC, where she works as a videojournalist.

She got her start at CFMT (now OMNI), before moving on to be a reporter, anchor and talk show host for Rogers TV Peel.

She’s also worked as a news writer for The Weather Network, writing weather-centric casts for a national audience.

n 2010, Nadia joined the CBC, working as a multi-platform reporter and anchor in St. John’s, Calgary and Edmonton. She also spent six years as an editor and freelance writer for Planet Africa Magazine, a Toronto-based quarterly publication that celebrates the achievements of the black community across the diaspora.

Nadia is also proud to be one of the first graduates of the University of Guelph-Humber (2006).

01:50
Global News Hour at 6 BC
Heroes honoured for life-saving efforts in North Vancouver

01:24
Global News Hour at 6 BC
Parents of nine-year-old victim of alleged racist attack in Surrey grocery store speaks out

02:02
Global News Hour At 11 BC
Future of school liaison officer in Vancouver schools

01:53
Global News at 11 BC
Parents concerned about classroom safety

01:52
Global News Hour at 6 BC
Families of Langley Lodge angry with delay in visitations

02:02
Global News Hour at 6 BC
Vancouver Police see spike in jewelry thefts and scams in city’s east side

01:37
Global News Hour at 6 BC
Woman says she was stalked by man on Burnaby Lake Park trail

01:45
Global News Hour at 6 BC
Man fighting for his life after Burnaby hit and run

02:00
Global News Hour at 6 BC
Friends of woman found murdered in Burnaby park last week in shock and disbelief

“When it happens to you then you realize this is real and people do think that way towards you and your culture. It’s not right,” the girl’s father said.

‘The badge, the gun, it’s sending a message,’ say student opponents of police in Vancouver schools

The Vancouver School Board is in the midst of a review of its School Liaison Officer (SLO) program, initiated last June amid a renewed global focus on racism and policing.

A woman asking how to book a COVID vaccine appointment was able to get a shot, but the B.C. Ministry of Health said the province’s policy is not to distribute extra doses this way.

Until the devastating second wave of the pandemic, the Langley Lodge was the site of B.C.’s deadliest care home outbreak, which claimed 26 lives between April and July.

The woman says the swindler made off with her husband’s necklace, the only memento he had from before fleeing Vietnam nearly half a century ago.

A B.C. woman is warning others after a frightening experience on a secluded trail through Burnaby Lake Regional Park.

Vancouver police are investigating after the woman said the man followed her for more than half an hour until she was able to find a group of strangers to sit with.

Securely disposing of old electronic devices is a key step in the fight against fraudsters, who may otherwise be able to recover your personal information.

The district voted to review the program last June, amid the renewed civil rights movement spurred by the death of George Floyd.

Henry revealed the signs and sentiments have affected her and her family.

The National Police Federation issued a swift and scathing response to Dr. Bonnie Henry’s comments about handling of addiction issues, calling them ‘inaccurate and disrespectful.’

“The perception of anti-Black discrimination within policing has remained constant among Black Toronto residents,” the Canadian Association of Black Lawyers’ report said.

A Winnipegger is facing charges under the Wildlife Act after keeping a black bear cub in his house. trib.al/xs6YjhJ

The details of the investigation are unclear at this time. trib.al/D0flN4M

Dozens of teachers are finding out they will no longer be needed in Halifax high schools this fall. trib.al/1AGUkvT