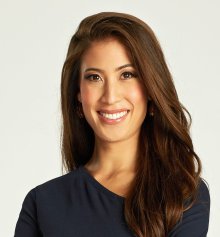 Miranda Anthistle is an award-winning journalist who started her career as a reporter/anchor more than a decade ago gaining experience working in newsrooms across Canada and internationally. Her passion lies in the power of storytelling to make a difference in society.

Since joining Global News Toronto in 2020, she has hosted several specials including the impeachment vote of former U.S. President Donald Trump, the inauguration of U.S. President Joe Biden, and most recently, the vigil held in London, Ont. for the Afzaal family. Anthistle is also the co-executive producer of Hidden Hate: Anti-Asian Racism, Canada’s first national network special on the rise of anti-Asian sentiment.

Anthistle is currently the co-host of Global News Weekend, as well as a weekday news anchor on the Global TV app and Amazon Prime Video. Prior to this, Anthistle was a reporter with Global News Toronto extensively covering the COVID-19 crisis and 2020’s Black Lives Matter movement.

Anthistle joined Global News from Bell Media where she worked as a reporter at CTV Toronto and CP24 for four years covering major breaking news stories including the Jian Ghomeshi trial, the Bombay Bhel restaurant explosion, travelling to Kingston to report on Gord Downie’s death, and delivering hours of live coverage during the Raptors’ historic championship win.

Prior to her career in Toronto, Anthistle co-anchored the evening news at CHCH in Hamilton and also worked as a reporter. She started her career in Medicine Hat, Alta., as a reporter and fill-in anchor at CHAT-TV and was part of the RTDNA award-winning news team providing on the ground coverage of the devastating floods. Anthistle has also worked in newsrooms in Brazil and California.

Born in London, England and raised in Toronto, Anthistle considers both cities home. When she’s not at the news station, she can be found biking around the city, practicing her Spanish, spending time with family and friends – preferably at the cottage, or at home with her two cats. Anthistle has a B.A. Honours from Queen’s University and earned a post-graduate degree from Humber College.