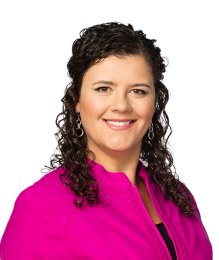 Warm, friendly and outgoing, Mia Sosiak is a multiple award-winning journalist who has covered issues that matter to Calgarians since 2003.

It all started with a newsroom tour when Mia was just 11 years old, which led to a cameo in a live newscast in her hometown of Winnipeg. She was instantly hooked on TV news. Mia graduated from University of Winnipeg and Ryerson University with English, Politics and Journalism degrees, and worked as a reporter in Winnipeg and Lethbridge before joining Global Calgary.

Mia’s favourite stories are those which allow her to show something we don’t often get to see. She was the first Alberta television reporter to gain permission to bring cameras into live court, back in 2007. Her series, Court of Hope, about an alternative justice program for recovering addicts, earned both national and regional RTNDA journalism awards, as well as the Canadian Bar Association’s Justicia Award. A follow-up feature several years later was also honoured with a regional RTNDA award. Mia was the first Calgary TV reporter in years to report from inside a local emergency department. Her in-depth feature, 12 Hours in Emergency, shed light on severe healthcare pressures affecting both patients and frontline workers. It was honoured for Excellence in Local Reporting by the Canadian Medical Association and Canadian Nurses Association.

Mia feels privileged to be a journalist, because of the perspective and personal growth it has brought to her own life. Journalists see, up close, the depths of people’s struggles, and their incredible capacity to overcome adversity.

Mia finally skied her first double black diamond run recently, and she loves exploring the Canadian Rockies back-country with her family. She is married to Glen, and the mother of two little girls, but only one inherited her curls.