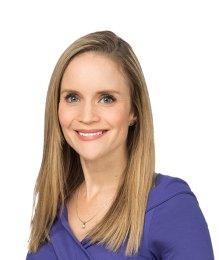 Laurel Gregory is the reporter and producer of Global News Family Matters.

She spearheaded the cross-country series after a decade of reporting daily news across the Prairies. Some of her career highlights include covering the Slave Lake wild fires, the Southern Alberta Flood, as well as travelling to Liberia, West Africa to report and mentor journalists for the Shaw Africa Project.

Laurel graduated with a Bachelor of Journalism Highest Honours from Carleton University in Ottawa. She has been recognized with numerous RTDNA Awards for her work in both regional and national categories. She was also the recipient of Corus Entertainment’s “Think Beyond” award for co-creating Family Matters.

Giving back is important to Laurel. She is a board member for Santa’s Anonymous and is proud to have raised more than $100,000 for breast cancer research as a member of Global Edmonton’s Bust a Move team.

When she isn’t chasing her three-year-old son, Laurel spends her free time trail running, cooking, travelling and trying out new restaurants in Edmonton.

WATCH: Laurel answers a few questions for Global Edmonton viewers, including: what makes you laugh, what items would be in your grocery cart, and what is the best part of living in Edmonton?

How the COVID-19 pandemic has freed up overscheduled families

How to support a child during sports tryouts

When parents and grandparents butt heads over child-rearing choices

How COVID-19 is altering parent volunteering in schools

Coronavirus: Tips to send your children back to school in optimal health

Family Matters: Leaving a positive money legacy to your kids

What to consider before homeschooling in Alberta

@lindork The best part of being a real live grown-up is that you get to do whatever you want! :) I'm sure you would… twitter.com/i/web/status/1…

How the COVID-19 pandemic has freed up overscheduled families

The extra time that the COVID-19 pandemic has given parents has in some cases been an opportunity to evaluate the pace of their pre-pandemic lives and question how many activities they want to return to. Continue reading →

Taming the after-school meltdown: ‘Show up with your heart first and the rest will follow’

Most jurisdictions’ COVID-19 screening protocols prevent students with symptoms such as a runny nose, congestion or sore throat from attending school. It means parents of children with the common cold are scrambling to arrange for remote learning and work from home. Continue reading →

Data out of the University of Calgary suggests more new mothers are struggling with postpartum anxiety and depression in the first three months after giving birth than prior to the pandemic. Continue reading →

Children’s sports organizations are turning to outside help to evaluate players at team tryouts in order to remove the politics from the process. Continue reading →

Surviving the cut: How to support a child during tryouts

While parents can feel helpless as their children navigate tryouts, the University of Alberta’s vice dean for Kinesiology, Sports and Recreation says there are tangible ways to offer support. Continue reading →

The C.S. Mott Children’s Hospital National Poll on Children’s Health found that among families where kids saw grandparents often or occasionally — 43 per cent had major or minor disagreements about parenting. Continue reading →

Coronavirus: With children apart from their parents for 1st time since lockdown, what should we expect?

A mental health counsellor and the founder of Coping Skills for Kids offers advice for parents spending longer periods of time away from their children for the first time in six months. Continue reading →

In its new report, Children First Canada describes the ways the COVID-19 pandemic is negatively impacting children across the country.  Continue reading →

Coronavirus: Tips to send your children back to school in optimal health

While parents cannot control what happens inside the classroom, they can do their best to send their kids back to school as healthy as possible. We went to the experts to find out how. Continue reading →

How to pass healthy money management patterns from parent to child

Financial empowerment coach Selina Gray says discussing money with children from a young age is essential because the narratives we have developed around money — that it doesn’t grow on trees; it’s a struggle; or it is meant to be saved — are developed early on. Continue reading →

‘Tsunami’ of parents interested in homeschooling amid COVID-19 pandemic

Some Canadian parents are choosing homeschooling over virtual learning or in-person classes amid the coronavirus pandemic. Continue reading →

As social distancing guidelines continue in Canada, some parents are seeking out virtual babysitters. We find out how it works. Continue reading →

Researchers find the further they go, the stronger mountain pine beetles’ signal gets

University of Alberta researchers have determined that the female mountain pine beetles’ pheromones, called trans-verbenol, can draw other beetles to a tree from tens of kilometres away. Continue reading →

“We want good projects to get done, moving our natural resources to new markets and creating good jobs,” the natura… twitter.com/i/web/status/1…

Tensions have come to a head over Indigenous fishing rights in Nova Scotia. The debate is focused on what defines a… twitter.com/i/web/status/1…