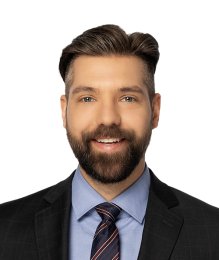 Jesse grew up in Saskatoon but spent a lot of time on the family farm in southwestern Saskatchewan. Weather was always the main focus during most seasons. His Opa seemed to be a human thermometer and barometer!

When Jesse wasn’t at the farm, he was at the lake, always checking the sky for good fishing and hiking weather. One day it clicked, “Wait a minute…  WEATHER AFFECTS EVERYTHING!”

As a child, Jesse was diagnosed with Ulcerative Colitis and spent many days, that turned into weeks and months in the hospital. This resulted in many surgeries by the age of 12. Jesse was elected to be the Champion Child for the Children’s Health Foundation of Saskatchewan where he represented all sick and injured children in the province. That honour lead to many television appearances and public speaking events. Once the lights hit him… he knew this was his career! Luckily, Jesse has an amazing mentor that gave him an inside look into not only the television world, but also the amazing science of meteorology.

After completing the Radio and Television Arts program at NAIT, Jesse headed south to take an internship at CHAT-TV in Medicine Hat: a short, one hour drive to the family farm. He lived a few blocks from his Opa and Oma. (As an unpaid intern, it was nice to have a good, home cooked meal just up the street!) His internship lead into a fulltime sports reporter/anchor job. Jesse would con the production staff into staying at the station after the late broadcasts to practice the weather forecast on the green screen, sometimes staying after midnight to hone his craft.

Finally, the call he was waiting for; Lisa Ford from Global Saskatoon, with an offer to take the 6 p.m weather job in his hometown!

Jesse then began the Operational Meteorology program through Mississippi State University. Which lead him back to Edmonton to deliver the forecast and co-host the morning show at CTV.

His final move puts Jesse as your Chief Meteorologist on Global’s Early News at 5 and News Hour at 6.

When Jesse isn’t delivering an accurate and informative forecast, you can find him strapped to a snowboard in the Rockies, scoring goals in lacrosse, dropping a rock on the button curling, with a hook in the water or on the hunt for a trophy buck.

WATCH: Global News Chief Meteorologist, Jesse Beyer, answers a few questions for Global Edmonton viewers, including: what are you most passionate about, what makes you laugh, and what is the best part of living in Edmonton?