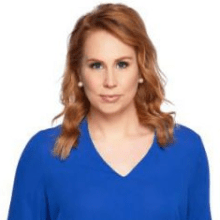 Jamie Mauracher is an RTDNA and Gemini award-winning journalist with more than a decade of experience covering national and international news.

Having taken a keen interest in investigative journalism, in May of 2021, Mauracher took on the new role of Global News Network Health reporter.

Previously a member of the Global Toronto team, since 2018, she has reported on a wide variety of high-profile stories, including the Yonge Street van attack and sexual assault allegations at St. Michael’s College School. Mauracher also spearheaded features on housing affordability in Toronto and has been a part of network collaboration on immigration as well as Global News’s extensive reporting on hydro costs in Ontario.

Mauracher realizes the value of a unique and innovative story idea and thrives from the rush of live television. Her stories have held decision makers accountable and led to change within the public and private sectors.

As a graduate of Ryerson University’s journalism program, Mauracher has lived in three different countries and six provinces. Prior to joining Global News she worked as a reporter and anchor with CBC, CityTV and CTV.

A first-time mother, when she’s not giving viewers their daily dose of health and science-related news, she enjoys traveling, working out and spending time with her family.