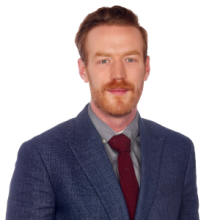 David Baxter joined the Global Regina news team in August 2015. The (almost) lifelong Saskatchewan boy was born in Porcupine Plain, grew up in Melfort, lived in McTaggart while working for the Weyburn Review, and graduated from the University of Regina School of Journalism in 2012.

His broadcast career began in Fort St. John, B.C., at CJDC where he was a TV reporter and radio anchor.

After 14 months in northern B.C. David returned to Saskatchewan to work for CTV Saskatoon. He primarily worked on its morning show in a behind the scenes role, but every now and again reported for the evening news. After another 14 month stint David jumped ship to Shaw TV in Saskatoon, working on the show “Go! Saskatoon,” and covering community interest stories.

David was also part of a three-person production team that made a documentary on Mormon missionaries that went to the Montreal World Film Festival in 2012.

When he’s not reporting the news David can frequently be found running, biking, or longboarding around Wascana Lake, playing board games, and trying out craft beers. Also keep an eye out for him at Rider games; he’s usually wearing a sport coat and Rider-themed luchador mask.

01:44
Global News at 10 Regina
What do federal election promises mean for Sask. voters?

01:32
Global News at 10 Regina
Sask. students getting out to vote despite hectic midterm season

02:41
Global News at 10 Regina
It’s been called a national crisis, so why isn’t opioid abuse an election discussion?

A person has died following an incident in Wascana Lake, alongside a popular walking path, on Thursday evening. Continue reading →

The City of Moose Jaw will close community and recreation facilities effective March 17 due to the COVID-19 outbreak. Continue reading →

Saskatchewan’s education minister has offered more resources to address teacher concerns, but not all the details are known at this point. Continue reading →

While the provincial election is eight months away, the Saskatchewan NDP have unveiled their first campaign promise — to build a parkade at the Regina General Hospital. Continue reading →

Both the Saskatchewan Teachers’ Federation president and provincial education minister are feeling optimistic about talks, one day after teachers voted in favour of job action. Continue reading →

Saskatchewan Premier Scott Moe says he hasn’t read the Buffalo Declaration yet, but many of the themes speak to growing western alienation. Continue reading →

A Saskatoon police officer has written an open letter to the deputy premier calling on improved supports for foster families following the killing of a 17-year-old boy. Continue reading →

An inquiry into the Northern Village of Pinehouse found that while the mayor and council were not meeting legislated requirements, their failings were not intentional. Continue reading →

The City of Regina paid a non-refundable $5,700 to book a man-made climate change skeptic to speak at an upcoming sustainability conference. Continue reading →

The Saskatchewan government has formed a new committee to consider potential investment in pipelines. Continue reading →

Preliminary data from the Saskatchewan Health Authority points to sizable increases in both HIV and syphilis diagnoses. Continue reading →

Birx said she would see Trump "presenting graphs that I never made" and that "someone out there or someone inside w… twitter.com/i/web/status/1…

Snow falling in the British capital on Sunday was a rare experience for some of the inhabitants of London Zoo, incl… twitter.com/i/web/status/1…