By Amanda Stephenson The Canadian Press

Alberta’s cities are once again abuzz with the sound of hammers and saws as surging oil prices fuel a fresh building boom in the province.

According to Statistics Canada, housing starts in Alberta, seasonally adjusted at an annual rate, climbed by 15.2 per cent to a seven-year high of 46,456 units in May.

Taking rural areas out of the equation and looking only at urban centres with a population of 10,000 or more, housing starts in Alberta were up 34.6 per cent year-over-year. By comparison, housing starts in Canada as a whole increased 3.4 per cent over the same period.

“Edmonton’s a little behind, but they’re also seeing the most starts since 2015. But Calgary is just going nuts and booming.”

Economists have long viewed housing starts as an important economic indicator, both because new home purchases are an expression of consumer confidence but also because homebuilders are unlikely to start a project that will take several months to complete unless they believe they’ll still be able to sell it at the end of that period.

In Alberta, the fact that housing starts are now the highest they’ve been since March of 2015 speaks volumes about the mood in a province that is emerging from years of economic downturn. New home construction in Alberta cities boomed from 2010 to 2014, a period when the province’s commodity-driven economy was roaring. But the oil price crash that began in late 2014 plunged the province into recession and slowed construction.

Now, however, oil prices are surging, and many of Alberta’s largest companies are posting record profits. The province is also once again starting to attract new residents from all over the country. Alberta led all other provinces in interprovincial migration in the fourth quarter of 2021 for the first time since 2015, according to Statistics Canada.

While he cautioned that rising interest rates are expected to take a bite out of new home construction in the back half of the year, Roach said that impact will likely be less severe than in other parts of the country thanks to the strength of the oil and gas sector.

“Overall, it does look like Alberta is going to have a good year, better than most other parts of the country,” he said. “It’s not 2014 again, we’re not getting that level of boom — but we are getting a nice, solid boost.”

It may not be 2014 again, but Dhruv Gupta — president of the Akash Group of Companies, which builds homes in the Calgary, Edmonton and Fort McMurray regions — said the mood in the industry right now comes closer to mirroring that heyday than it has in nearly a decade. While he said rising interest rates will definitely have a negative impact on his company’s ability to move houses, he expects Alberta to be better placed than other jurisdictions to weather the storm.

Already this year, Gupta said, his company has seen a significant influx of Ontario buyers looking to move to Alberta because of its relatively affordable real estate prices. He said that trend could continue as interest rates and the cost of living rise.

“We (Alberta) have got the highest wages in the country with amongst the lowest house prices, and we have $120 oil,” Gupta said. “So there’s a lot of positivity here that isn’t necessarily being felt in other parts of the country.”

But just as it did in the boom years, all of the construction right now is bringing with it challenges. A lack of available workers is straining builders and in some cases, delaying project completions, Fash said.

“It’s actually worse than 2014, because the whole North American labour pool is taxed right now,” he said. “You could have all your foundations poured for 20 homes, and then you might not be able to get access to framers for six weeks … for most of the people I’ve talked to, it’s like nothing they’ve ever seen before.”

In addition, COVID-19 related supply chain issues continue to be a frustration, affecting the availability of everything from lumber to toilets to refrigerators.

“It’s just this rotating set of headaches, like, ‘oh, I can’t get any siding other than grey for the next six months,'” Fash said. “It’s basically a daily grind to try to find materials and order enough.”

While Fash also expects activity to ease somewhat as rising interest rates start to have an effect, he echoed Gupta’s view that Alberta’s relative affordability compared to other markets could keep those hammers and saws going for a while.

“If you have the ability to move, because of remote work or otherwise, what $500,000 gets you in Alberta relative to any other major centre or province is drastically different,” he said. “Rising interest rates are only going to feed into that.” 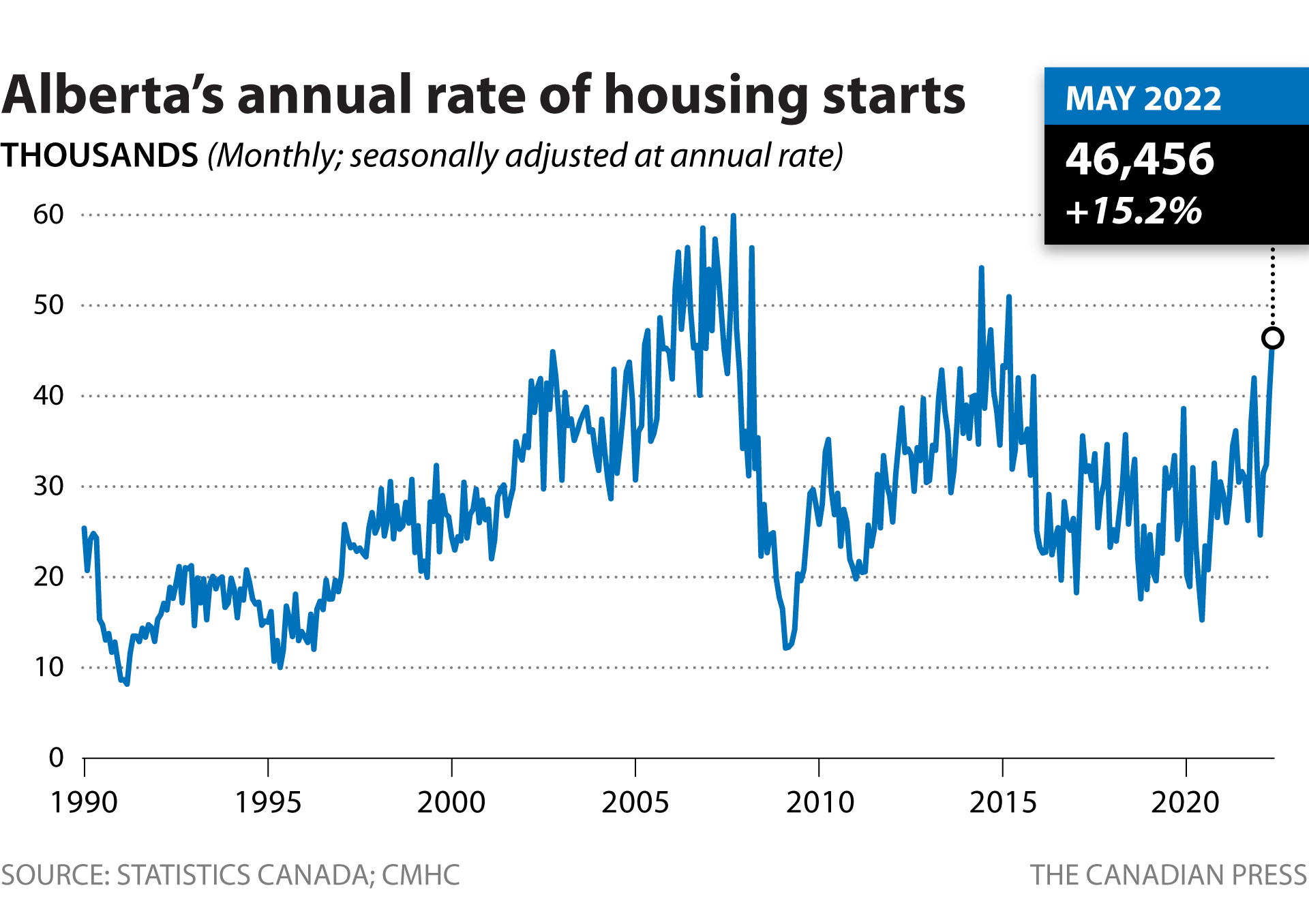