There’s been a flurry of transactions across the Manitoba Junior Hockey League since the Western Hockey League announced their players can join other league’s until ‘The Dub’ returns around Christmas time.

The Virden Oil Capitals made the biggest splash by adding four players, including defenceman Daemon Hunt.

Unbeaten in regulation time in their first six games of the season, the Oil Caps only got stronger with the addition of the Minnesota Wild draft pick. The 18-year-old Brandon product played the last three season with the WHL’s Moose Jaw Warriors, and was just selected by the Wild in the third round (65th overall) of the 2020 NHL Draft.

“Pretty exciting for us, for our guys and for us as an organization, and certainly happy to have Daemon here,” Oil Capitals general manager and head coach Tyson Ramsey said.

“He’s played with a couple of our players, and he’s a local guy here. And so he fits into our group right away.”

Hunt had his first practice with his new team on Monday.

Ramsey coached Hunt previously with the Brandon Wheat Kings of the Manitoba AAA U18 League.

READ MORE: MJHL expanding as Winnipeg gets another hockey team

Also joining the Oil Capitals is Virden’s own Grady Lane of the Spokane Chiefs, McAuley’s Jake Poole of the Kelowna Rockets, and Medora’s Garrett Sambrook of the Swift Current Broncos.

And that’s not counting Strathclair’s Conor Geekie who’s been with the Oil Caps all season after playing seven games for the WHL’s Winnipeg Ice last season.

WHL players can only remain with their MJHL team until mid-December. The WHL is scheduled to open their season on Jan. 8.

For all MJHL clubs, it’s a bit of a juggling act, trying to add the elite talent, even though they’ll be gone way before the playoffs.

“I feel like we’re being conscious of our guys and our team, and at the same time, giving some of these guys a chance to play,” Ramsey said. “It’s a bit of a balancing act, but part of what we want to do here is help develop our guys. So, what better way to have our guys develop a little bit by practicing with some of these guys, and watching some of the things that they do every day.”

Global News was able to confirm a total of 12 player transfers from the WHL to the MJHL since Friday’s announcement by the Western Hockey League. 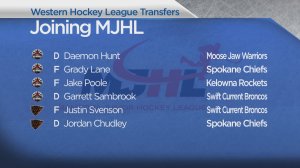 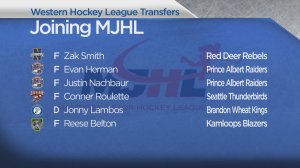 Ile des Chênes Justin Svenson and Souris’ Jordan Chudley have both hopped back on board with the Winkler Flyers.

The Neepawa Natives added Red Deer Rebels winger Zak Smith of Austin. He played the last three seasons in the WHL after skating for Neepawa in the 2017-2018 season.

The Raiders have loaned Evan Herman and Justin Nachbaur to the MJHL's OCN Blizzard until Dec. 20.

Both players will return to the Raiders for the start of the season.

Winnipeg’s Conner Roulette made his Selkirk Steelers debut on Saturday after playing for the Seattle Thunderbirds last season.

Defenceman Jonny Lambos goes from the Brandon Wheat Kings to the Steinbach Pistons.

And Winnipeg’s Reese Belton is headed back to Portage with the Terriers after a season with the Kamloops Blazers.