Statistics Canada says the consumer price index for June was up 0.7 per cent compared with one year ago, ending a run of negative inflation that began in April in the wake of the COVID-19 pandemic.

The consumer price index had registered two months of negative readings leading up to June, first with 0.2 per cent annualized decline in April, then a further 0.4 per cent drop in May. The average economist estimate from data firm Refinitiv forecasted an annualized inflation rate of 0.3 per cent for the month. 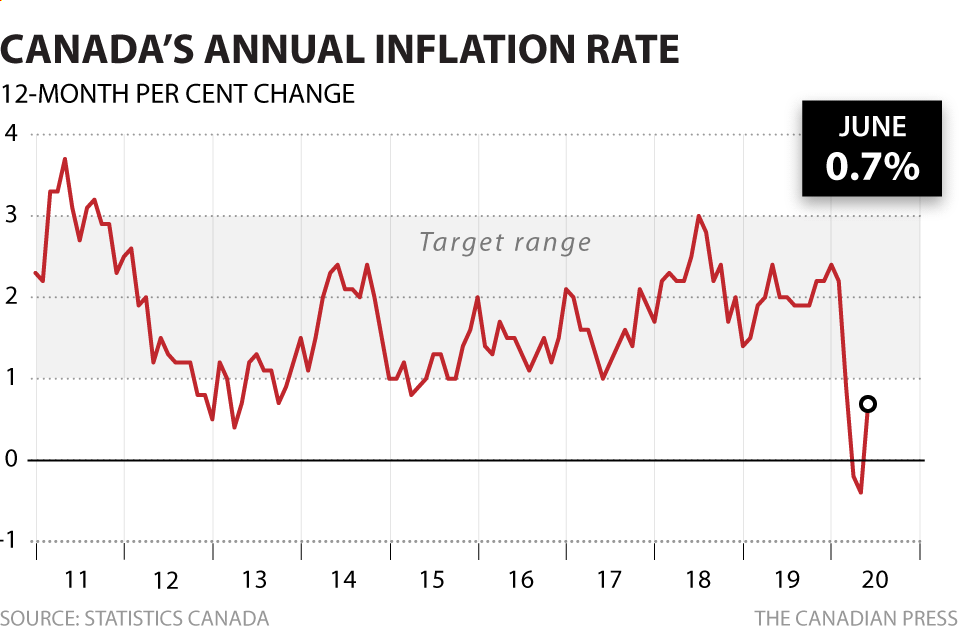 The turnaround from May to June matched the fastest acceleration in the headline inflation reading since March 2011. Fuelling the rise was an increase in clothing and footwear after two months of declines as brick-and-mortar stores were closed due to COVID-19.

Gasoline prices edged also up as more people were on the road after businesses and public services gradually reopened, and what the agency called a general increase in local travel during June.

CIBC senior economist Royce Mendes says the increase in business activity across the country as restrictions ease led to a rebound in prices. In a note, he says inflation should remain in positive territory as the economy continues to reopen.

“While any fears of deflation appear premature at this point, the economy will likely only be generating modest rates of inflation even with some supply-chain disruptions,” he writes.

The Bank of Canada forecast last week that annual inflation will be 0.6 per cent this year and vowed to maintain its key interest rate at the effective lower bound of 0.25 per cent until inflation hits its two-per-cent target.

Statistics Canada reports that mortgage interest costs fell for the second consecutive month, this time by 0.3 per cent, partly due to declining bond yield and the central bank’s rapid rate cut in March.

The agency says prices rose the most in Alberta compared to June 2019 when commodity prices fell and the provincial government eliminated a carbon tax.

Year-over-year price growth was the weakest in the Atlantic provinces, held down by low prices for furnace fuel oil that is more commonly used in the region.

In Ontario, electricity prices rose 17.2 per cent on a month-over-month basis, the largest monthly increase since May 2003, Statistics Canada says. The agency attributes the change to higher prices kicking in June 1 in the province after the Ford government reduced fees in March as people were ordered to stay home to slow the spread of COVID-19.

Shifts in consumer behaviour have thrown off the headline consumer price index, which Statistics Canada said would have shown annualized readings of 0.0 per cent in April and -0.1 per cent if it better reflected pandemic spending.

The agency did not include an inflation reading under the experimental price index Statistics Canada created with help from the central bank.