A vast swath of central and northeast British Columbia are under warnings and advisories due to potential flooding this weekend.

The B.C. River Forecast Centre has placed the upper Fraser River and its tributaries near Prince George, along with the Quesnel River, under a flood warning.

Several days of sustained rain have combined with seasonal snowmelt to potentially swell rivers beyond their banks, said the centre.

On Saturday, the Regional District of Fraser-Fort George issued an evacuation order for nine properties near McBride.

The City of Prince George also issued an evacuation alert for residents of Farrell Street across from Paddlewheel Park “due to significant risk of flooding from the Fraser River.” 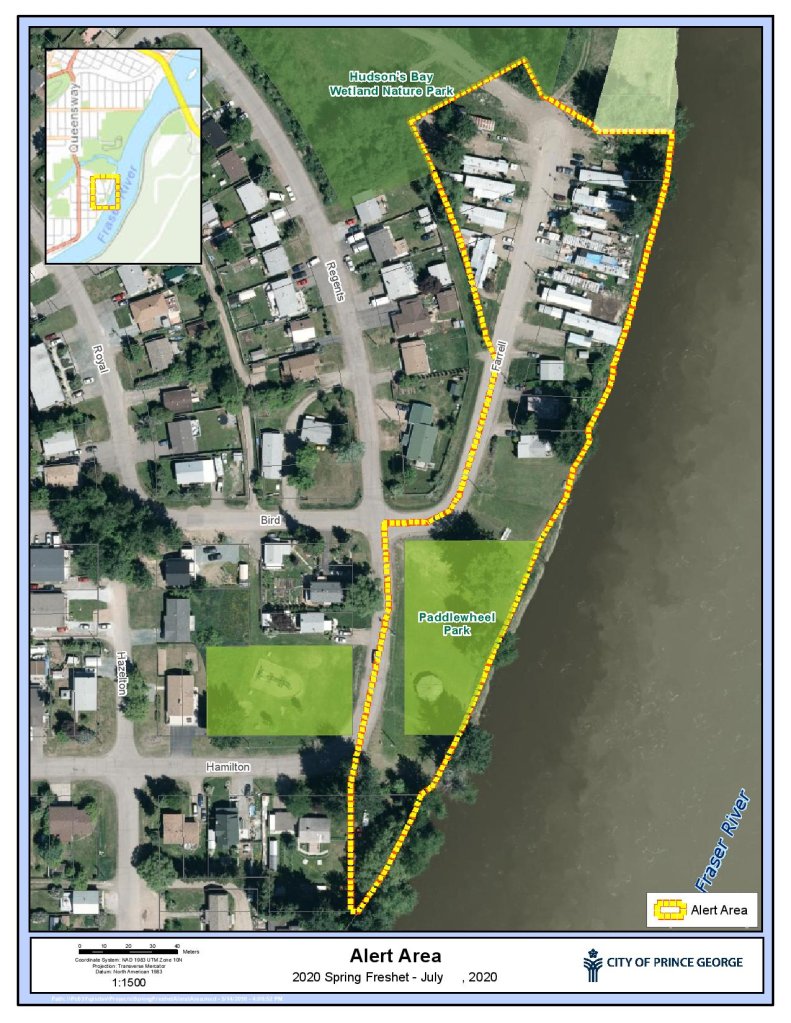 “The BC River Forecast Centre is predicting the river level at South Fort George could reach between 9.5 to 9.8 metres this weekend,” said the city.

“Currently, the Fraser River at South Fort George is at about 9.4 metres. Residences on Farrell Street could start to flood when the river reaches about 9.8 metres.”

On Friday, the Cariboo Regional District issued an evacuation alert for several properties on Garvin Road southeast of Quesnel due to potential flooding.

Flood watches are in place for the entire Peace and northeast regions, the Chilcotin River, the middle Fraser and the Fraser River, from Prince George to Boston Bar.

A stretch of the Trans Canada Highway near Revelstoke was closed overnight between Thursday and Friday due to a washout. Crews have since reopened the route to a single lane.

The Thompson river and its tributaries are also under a flood watch. The advisory covers the Shuswap Lake, Shuswap River, Adams River, Blue River and Clearwater River.

About 500 people remain without water in the Seymour Arm area of Shuswap lake, after a mudslide damaged the Bass Creek water diversion structure on Thursday.

Concerns about rising waters on the Fraser prompted New Westminster to close its boardwalk until levels recede.