Editor’s note: A previous version of the story quoted the property owner’s calculations on property tax. The City of Calgary has provided clarification on how to calculate the property tax increase.

Katherine Jones owns a 12-unit building in northeast Calgary. She says she was stunned when she got her bill this week.

“I was extremely shocked at the increase,” Jones said.

The city says you have to compare the year-over-year total tax bill – not add up your installments because those can change over the year. Information can be found on their website here.

According to the Calgary Residential Rental Association property taxes rose on average 23 per cent for multi-residential taxpayers. 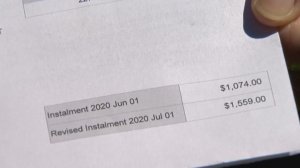 The organization also said that out of 942 properties, almost half of them saw hikes of somewhere between 10 per cent and 40 per cent, and in some cases even more.

Story continues below advertisement
“I can tell you that it’s all directed at city council. No one can believe that after five years in a recession and the COVID[-19 pandemic], that city council would be so thoughtless and uncaring.”

Baxter told Global News the CRRA met with the city, sent numerous letters and even provided some options, but it was all in vain. A report presented to city council at the end of April was voted down.

“All we were looking for was the same treatment as what city council has done for the last five years with the business community. Instead, this year, city council has said they don’t care.”

Baxter added landlords have been working very hard the last few years with reductions in rent as well as increased vacancies. He also pointed out many landlords are not huge corporations but mom and pop retirement investments — without deep pockets. He believes the move to not provide any kind of relief will backfire.

Jones is worried about that as well, especially with the prolonged downturn in Calgary’s economy and the ongoing pandemic.

“Is it possible to even pass this kind of increase on to tenants? I don’t think so,” she added.

Instead, Jones plans to put some of the renovations and improvements she was going to do to the building this summer on hold.

Global News reached out to the City of Calgary for a comment, was referred to council. A spokesperson for Mayor Naheed Nenshi told us the mayor was not available to comment on the concerns from landlords.