Police are hoping the public can help them identify a man who allegedly punched a young woman several times in the face last weekend on the SkyTrain.

According to Metro Vancouver Transit Police, the woman boarded a train at Waterfront Station in Vancouver at around 7:50 a.m. on Saturday, April 25.

She was approached by a man on the train who had been staring at her, police said.

The woman asked him if something was wrong, and he started yelling at her: “You people are why my daughter is sick!”

He grabbed her bag and punched her in the face multiple times, police said, then grabbed her by her hair and slammed her head into the seats.

When the train stopped at Burrard Station, the suspect pushed her off the train and grabbed her cell phone, police said. She called out for help, and two Good Samaritans were able to retrieve her bag from him.

But he allegedly threw her phone against the wall, breaking it, police said.

He remained on the train, eventually getting off at King George Station in Surrey.

The woman suffered significant swelling to her face, a bloody nose and a cut above her eye.

The suspect is described as a South Asian man, 40 to 50 years old, between five-foot-five and five-foot-seven, with a medium build and a salt and pepper beard. He was wearing a black jacket, a green hoodie and blue jeans.

A photo of the suspect: 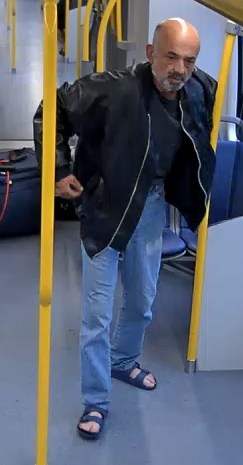