Grafton Thomas, 37, is accused of attempted murder after allegedly bursting in to the Hanukkah celebration on Saturday night in Rockland County, about 48 kilometres north of New York City. 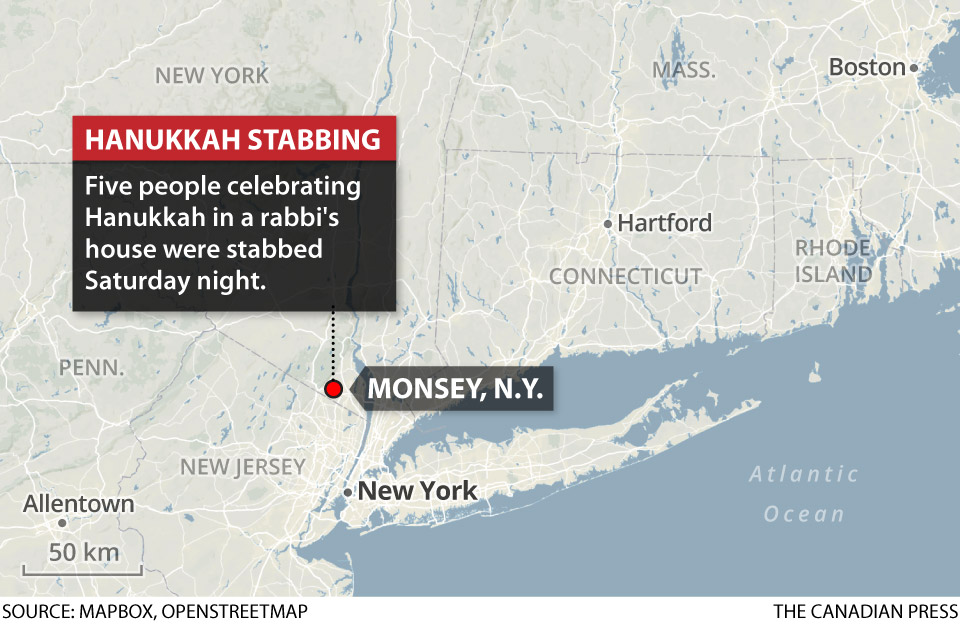 Thomas was held without bail after appearing in federal court to face five counts of obstructing the free exercise of religious beliefs by attempting to kill with a dangerous weapon and causing injuries.

Authorities said handwritten journals containing references to Jews and anti-Semitism were found in his home. Internet searches on a phone recovered from his car included repeated searches for “Why did Hitler hate the Jews,” as well as “German Jewish Temples near me” and “Prominent companies founded by Jews in America,” the complaint said.

The hate crime-related charges came Monday, a day after Thomas pleaded not guilty to five counts of attempted murder and one count of burglary.

“We have nothing to indicate at this time that there were other people (involved), but that will be part of a very lengthy, very methodical and thorough investigation,” New York Police Department Commissioner Dermot Shea told reporters.

A statement on behalf of Thomas’ family was released by attorney Michael Sussman on Sunday, and alleged he had a “long history of mental illness and hospitalizations.”

0:43 ‘We will protect you’: De Blasio reacts after Hanukkah celebration stabbings

“He has no known history of anti-Semitism and was raised in a home which embraced and respected all religions and races. He is not a member of any hate groups,” the statement said.

Thomas’ criminal history includes an arrest for assaulting a police horse, according to an official briefed on the investigation who was not authorized to discuss the matter publicly and spoke to The Associated Press on condition of anonymity. A lawyer representing Thomas at the arraignment said he had no convictions.

Latest in series of anti-Semitic incidents

Meanwhile, police in New York have upped their presence in Jewish communities.

Police said there has been a 21 per cent increase in anti-Semitic hate crimes in the city this year.

Read next: Pope clarifies comments on homosexuality, says sexual act ‘outside of marriage’ is a sin

Saturday’s violence was at least the 10th anti-Semitic incident in the New York and New Jersey area in the last week, according to the Anti-Defamation League.

“Whether worshiping in a synagogue, or shopping at kosher supermarket, or celebrating Hanukkah in the home of your rabbi, Jews should be safe from violence,” a statement from the Jewish organization read.

— With files from Reuters, Associated Press