A coalition of Ontario parents say the provincial government is not being transparent when it comes to recent consultations on education.

Read next: Looking for a used car? Everything to know about Canada’s cooling market

The groups submitted a freedom of information request for results of the consultations, specifically related to class size changes. The ministry of education denied that request last month, explaining in a letter, “After careful review, the Ministry has determined the records must be withheld.”

The parents specifically asked to see a summary of the results and responses from individuals with personal information redacted. 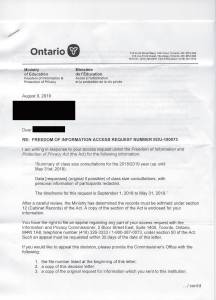 Jessica Lyons, who has three daughters in elementary school is part of the group, West End Parents for Public Education, told Global News Monday, “We are calling on them to stop hiding this information. Ontarians have a right to know the results of this survey.”

Lyons said she believes the information the government is withholding is detrimental.

Read next: A new look at high fidelity music: The rise of Dolby ATMOS and Spatial Audio

“We filed the request because we believe the conservatives used these consultations to appear as though their regressive destructive cuts are policy generated with public input and support and we know that is not true,” she said.

“We feel confident that no parent has requested larger class sizes, and yet that’s what our kids are having to deal with.”

Alexandra Adamo, a spokesperson with the ministry did not give specifics as to why the freedom of information request was denied but told Global News Monday, “We continue to review feedback to the class size consultation, in which we received more than 6,500 submissions.

Adamo also said the government has reassured students and families class sizes would “effectively remain the same” this fall.

“Any discussion beyond this is happening where it should be — at the bargaining table,” she said. “Our government will continue to negotiate in good faith in order to reach a deal that makes sure students remain in class. We look forward to continue working with all our partners.”

Becky Wallace, a parent member of Ontario Families for Public Education said,”Parents, students, and educators across the province took the time to provide feedback on the government’s decision to increase class sizes.

“By refusing to release the results of the consultation, parents are left to wonder who this government is actually listening to,” she said, adding the groups involved in submitting the request have now appealed to the Information and Privacy Commissioner and are waiting on a response.

“They talk a lot about talking to parents and listening to the public but they won’t share with us who they are listening to, who they’re meeting with and I think that is concerning for a lot of people,” Stiles said in an interview.

She said denying the FOI request shows a “total lack of transparency” and is consistent with previous moves by the conservatives.

Stiles pointed to the recent scandal around public appointments and information about the Ontario Autism Plan being withheld.

On class sizes she said, “I think this government is in damage control mode and they decided to limit the information that they shared.”