Canadians trapped in the Bahamas by devastating Hurricane Dorian

As rescue efforts began Tuesday, Canadians were among those frantically trying to reach loved ones trapped in the Caribbean by the devastating storm.

Canadian Kristin Dudley is waiting to hear from parents, doctors Dennis Dudley and Sharyn Laughlin, who were at their family home on the Abaco Islands when the storm struck.

“We tried to get our parents our of Treasure Key,” she explained. “We found charters that were able to get them out, but then they closed the airport.”

With no way out, they decided to ride out the storm in the Bahamas.

“The ocean has washed away the first floor,” Dudley said. “Most of the windows have been blown out, and part of the roof on the other side of the house has caved in.”

Her parents, along with two guests, made it to the attic of the home in time, but they have been unreachable since.

Dorian pounded the northern Abaco Islands and Grand Bahama with winds up to 295 km/h and torrential rain before finally moving into open waters on a course for Florida.

Red Cross spokesman Matthew Cochrane said more than 13,000 houses, or about 45 per cent of the homes on Grand Bahama and Abaco, were believed to have been severely damaged or destroyed.

U.N. officials said more than 60,000 people on the hard-hit islands will need food, and the Red Cross said some 62,000 will need clean drinking water.

Alex Kane is another Canadian trapped in the Caribbean.

Kane is among a group of Canadians who had been filming a television series in the Bahamas.

In an interview with Global News on Tuesday, he said the storm was “still very active,” especially on Grand Bahama.

“The storm is just starting to leave it now, but there are people trapped in their homes, people trapped on their roofs waiting for help,” he said. “And likewise, people who love them wanting to hear from them,” he said.

Kane said his group relocated to the Exhuma district on Friday, in an attempt to avoid the storm’s path.

However, Kane says two of their crew members, who are from the Bahamas, were in Treasure Key when the storm hit.

“Two brothers, who are local Bahamians that are part of our crew,” he said, “who are really part of our home here, we have not heard from them yet.

“They are two incredible young men.”

Government figures based on the voluntary Registration of Canadians Abroad indicate there are 220 Canadians registered in the Bahamas.

There are also nearly 2,000 Canadians who may be currently located in states that are caught in the hurricane’s path.

In a statement Monday evening, Global Affairs Canada said it was continuing to “closely monitor Hurricane Dorian’s trajectory and the situation in the affected areas and stand ready to provide consular assistance to Canadians citizens as required.”

On Monday, Prime Minister Justin Trudeau tweeted, saying Canadians are “thinking of those in the Bahamas impacted by Hurricane Dorian’s destruction.”

“We’re ready to provide support if needed,” he wrote. “And I urge everyone still in the storm’s path to stay safe & follow instructions from local authorities.”

Canadians are thinking of all those in the Bahamas impacted by Hurricane Dorian’s destruction. We’re ready to provide support if needed. And I urge everyone still in the storm’s path to stay safe & follow instructions from local authorities. https://t.co/PgHX62Tr3B

The federal government has also issued travel advisories, urging Canadians to “avoid all travel” to the U.S. east coast from Sebastian Inlet in Florida, to the North Carolina and Virginia border, and to Grand Bahama and the Abacos Islands in northwestern Bahamas due to Hurricane Dorian.

“The decision to travel is your choice and you are responsible for your personal safety abroad,” the advisory reads. “We take the safety and security of Canadians abroad very seriously.”

Headed towards the Carolinas

According to Global News Chief Meteorologist Anthony Farnell, after nearly two days sitting over northern Bahamas, Hurricane Dorian is now on the move. 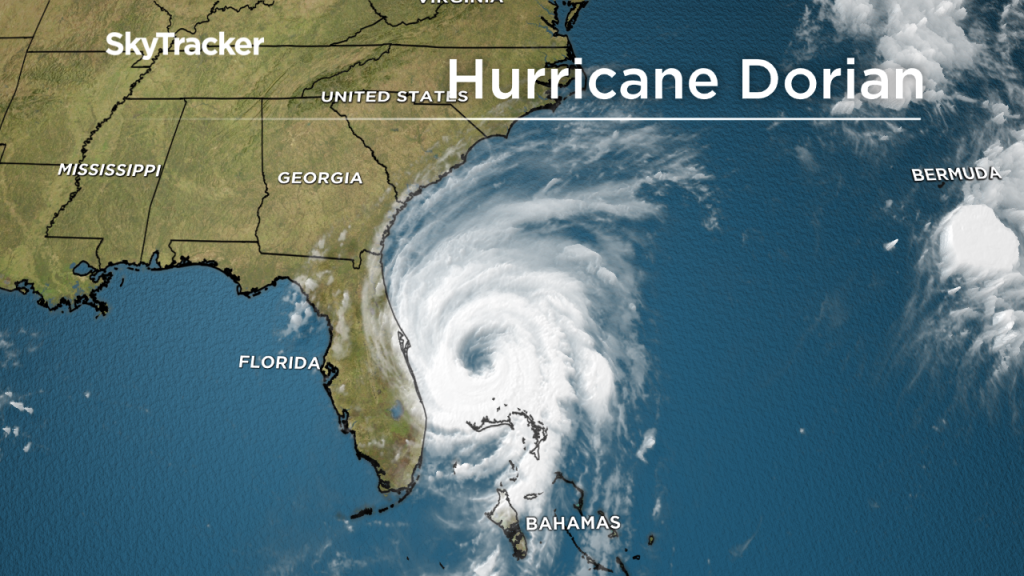 “The hurricane tapped all the energy available from the ocean while stationary and weakened down to a category 2 hurricane,” he said. “Now that it’s moving over very warm Gulf Stream water, some minor intensification is possible before interacting with the south and north Carolina coastline.”

Even though Dorian is moving back over warmer water, strengthening tonight/tomorrow will be slow because of the much broader circulation and leftover dry air in the storm. pic.twitter.com/UIOtvIxMOu

He says the wind field will continue to expand, meaning more of the coastal southeast U.S. will experience tropical storm or hurricane force gusts and storm surges of up to seven feet.

“After North Carolina, Dorian will accelerate towards Atlantic Canada, potentially bringing gusty winds and torrential rain this weekend,” he said.

— With files from Shallima Maharaj, Phil Carpenter, Maryam Shah and the Associated Press