Another round of stormy weather hit Edmonton Wednesday night, resulting in flooded roads, popped manhole covers and even a sinkhole that created problems for drivers in the city.

Yellowhead Trail westbound at St. Albert Trail remained closed Thursday due to what police called a sinkhole, which appeared after the underpass flooded. The closure forced drivers up and over the overpass, causing delays during the morning commute.

#yegtraffic update: Yellowhead westbound at St Albert Trail is completely shut down due to a sinkhole.

“It’s very congested. That storm really did a number on that corner there… It’s really going to add to the commute for sure,” said Shawn Klingspon, who drives the route to and from work.

The Yellowhead was first closed at 9 p.m. Wednesday because of the flooded underpass, where several people had been rescued from vehicles trapped in the water.

In a statement Thursday afternoon, the City of Edmonton said it is working with EPCOR to reopen the road as soon as possible.

Together, they will “investigate the condition of the drainage assets and the road structure at Yellowhead and St. Albert Trail, carry out the repairs and reopen the road as soon as possible. Although we can’t speculate at this time on how long it will take to determine the issue and carry out repairs, we recognize this is a major transportation corridor.”

Work is also being done to determine if in fact they’re dealing with a sinkhole.

“At this point we don’t know if it’s a sinkhole,” said Caitlin Zerebski with the City of Edmonton. “At this point, EPCOR’s on site doing the investigation. They’re seeing what has occurred with the water that had come down last night.”

Watch below: Video from the Global 1 News helicopter shows the damage along Yellowhead Trail Thursday evening

Farther south, the intersection of 111 Avenue and Groat Road appeared as though it was a small lake.

There was flooding in several areas of the north and west end, including a section of Stony Plain Road in the Glenora neighbourhood.

John Simpson lives in Glenora and arrived home just as the heavy rain started to fall.

“Come driving home through the puddles… some places maybe half a foot high. I pull up, go in and the sewer is backing up into the basement. There was probably, in spots, two inches. And full-on raw sewage.”

By Thursday, Simpson and his family had bagged up many of their belonging and brought in fans to attempt to dry out the basement. Damaged floor boards also had to be pulled up. 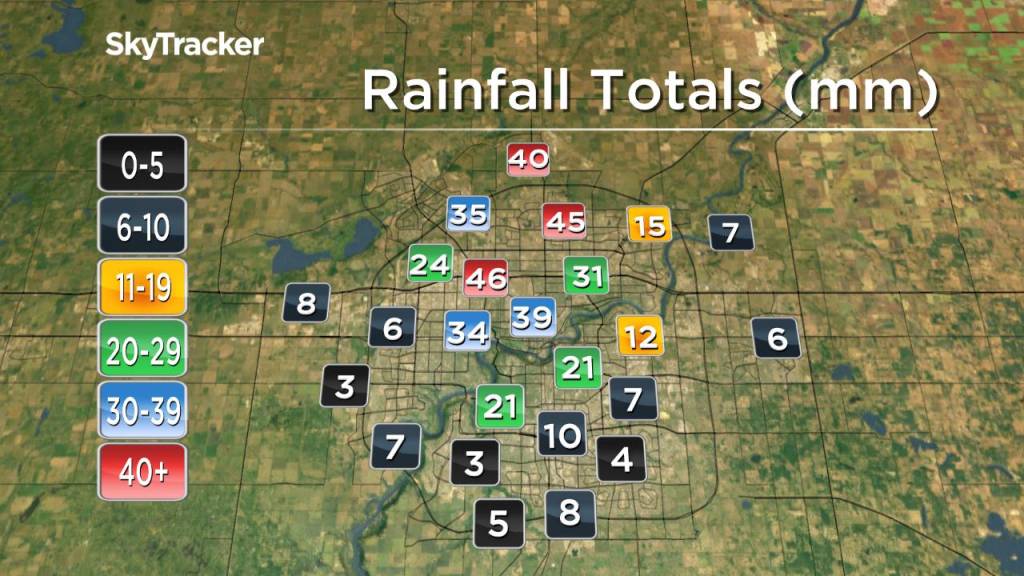 “There were approximately 21 events within the first hour of the storm — this number is approximate as there were multiple calls received for the same event,” Brittany Lewchuk with Edmonton Fire Rescue Services said.

Crews also responded to calls to replace manhole covers that had popped off in the storm, and multiple calls for alarms triggered by things like power outages.

There was also one call to a home that was struck by lightning, but the city said it didn’t catch fire. There were no injuries reported.

GALLERY: Photos of the aftermath of the Edmonton storm on July 17, 2019.

EPCOR said between 6 p.m. Wednesday and 6 a.m. Thursday, it received 222 calls from across the city as a result of the concentrated, intense storm system.

“We are still responding to calls for manhole covers off, and are working to support the city on efforts to repair the roadway at the underpass at St. Albert Trail,” EPCOR said in a 10 a.m. update.

EPCOR said stormwater facilities in the north end were quite full and asked people to stay away from them as water levels can rise unexpectedly.

EPCOR also reminded people not to enter or stop in underpasses during severe summer storms.

WATCH BELOW: The ‘Diner en Blanc’ “chic picnic” event that more than 800 people were expected to attend was rained out at Commonwealth Stadium on Wednesday night.

The weather also prompted a pair of local sports teams to delay the starts of games Wednesday.

FC Edmonton’s kickoff against Valour FC at Clarke Stadium was delayed by nearly an hour because of lightning.

The game did eventually get underway, but was halted in the eighth minute after another storm cell roared through, according to the team’s recap.

The teams waited for nearly two hours before restarting and the match ended with a 0-0 draw. The game was scheduled to start at 7 p.m. and finished at 11:26 p.m.

Meanwhile, the opening pitch of the Edmonton Prospects’ game against the Brooks Bombers at RE/MAX Stadium was also delayed, before a decision was made to postpone the game until Thursday.

A Prospects official said the teams would play a doubleheader on Thursday, beginning at 5 p.m., depending on the weather.

The Remax Field Lake has returned. Waiting on word from officials about today's game. Lots of fans have, unfortunately, left. pic.twitter.com/eWwDhX2mnB

Want your weather on the go? Download the Global News Skytracker weather app for iOS and Android.