Sixty-one per cent of internet users globally support having governments censor fake news, according to a new Ipsos poll.

In Canada, though, that number drops to 46 per cent, despite 90 per cent of Canadians saying they have fallen for fake news.

According to the fifth CIGI-Ipsos Global Survey, which measures internet security and trust among users in 25 countries around the world, 61 per cent of global respondents said they believe governments should be involved in censoring fake news and roughly 85 per cent said they support social media sites removing fake posts and accounts.

But there is little agreement on who should decide what constitutes fake news: among all respondents, 17 per cent believe it should be the government, but there is a wide range between responses in individual countries, from 37 per cent in Indonesia to a low of seven per cent in Poland.

Canadian and American respondents fell on the lower end of the scale, with 10 and 11 per cent, respectively, saying that deciding what constitutes fake news should be the purview of the government.

Sixteen per cent overall think that job should fall to individual internet users, while 12 per cent think it should go to social media companies.

WATCH: How to teach kids to hunt out fake news? With dinosaurs of course

At the same time, only 11 per cent of users in the U.S. and 12 per cent in Canada say it’s getting easier to use the internet without worrying it is being censored.

In contrast, 22 per cent of Americans and 18 per cent of Canadians say it’s getting harder.

Worldwide, 18 per cent of internet users believe it’s getting easier to use the internet without censorship worries, while 22 per cent say it’s getting harder. 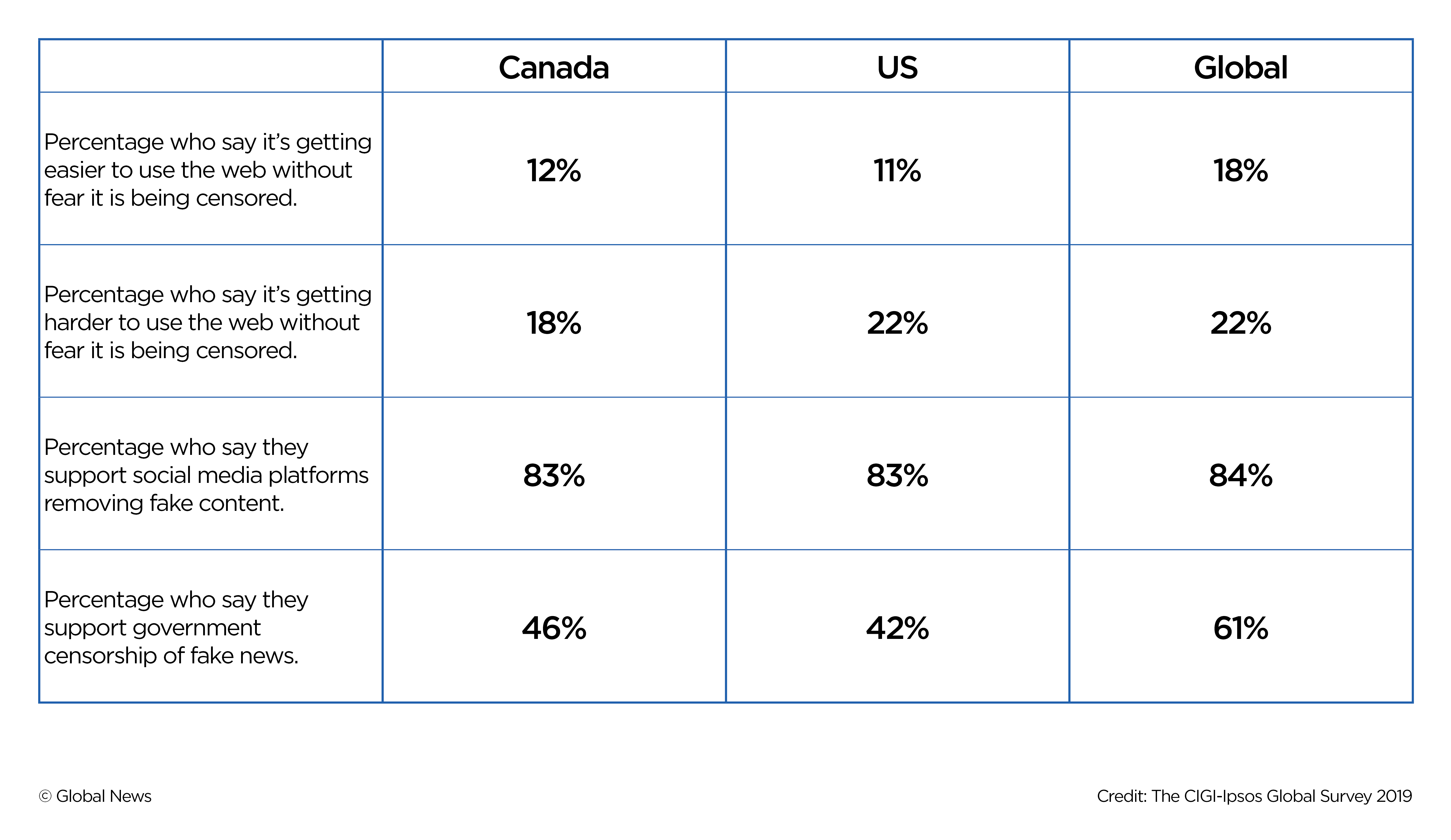 Twenty-six per cent of North Americans also reported self-censoring what they say online, but overall, 63 per cent of total respondents say social media has increased their freedom of expression.

The survey comes as governments around the world grapple with the scourge of fake news.

In Canada, the concerns are focusing particularly around how to limit the influence of fake news in the upcoming election.

Prime Minister Justin Trudeau’s government tabled and has since passed legislation that it argues will crack down on “malicious” internet users and require political parties to put privacy policies in place, although the legislation does not give any enforcement power to the privacy commissioner to make sure political parties actually follow the rules they set for themselves.

It also lays out new rules for actors that want to run political advertisements and requires them to maintain a registry of who pays for those ads with the goal of preventing the spread of fake news from having an influence on voters in the upcoming fall federal election.

The U.S. 2016 presidential election saw social media users targeted with fake news and political advertisements using personal information they were not aware was being shared from Facebook to Cambridge Analytica, a political advertising firm that tried to get people to vote for now-U.S. President Donald Trump.

And in light of the Cambridge Analytica scandal, as it came to be known, an international grand committee of parliamentarians from roughly a dozen countries have been convening, most recently in Canada, to call the heads of social media companies to testify on what actions they are taking to combat fake news.

LISTEN BELOW: Polling shows that 90% of Canadians have been fooled by Fake News, and people are losing trust in the internet

Facebook CEO Mark Zuckerberg has defied the committee, however, which led to an unprecedented and unlimited order to appear being issued by the Canadian access to information committee, which would see a bailiff hand the order to Zuckerberg the next time he sets foot in the country.

But while Democratic Institutions Minister Karina Gould said last year she’s “not feeling great” about how seriously social media companies are taking the threat posed to elections by fake news, she has also left the potential job of regulating social media up to whoever wins the election and declined to do so herself at this point.

Gould was asked about the results of the survey on Tuesday, specifically the finding that 90 per cent of Canadians say they have been duped by fake news.

“Having a conversation about it is really important so that we’re talking about if people are checking their sources,” she said, pointing to the work being done to get social media companies to set up registries for the political advertising they run.

“I think it’s a good thing that we’re talking about it.”

Twenty-one of those countries used the Ipsos internet panel system. Results from Kenya, Nigeria, Pakistan and Tunisia were gathered using face-to-face interviewing, “given online constraints in these economies and the length of the poll,” according to Ipsos.

The poll surveyed roughly 1,000 individuals from each country and weighted them to match the domestic population demographics.

The precision of Ipsos online polls is measured using a credibility interval. In this case, a poll of 1,000 is accurate to within +/- 3.5 percentage points, while the margin of error for the face-to-face interviews is within +/-3.1, 19 times out of 20.