Employees at a Manitoba health centre received more than a million dollars in questionable payouts – including thousands in cash advances and extensive entertainment costs – over the course of 18 months, according to an internal audit which details the allegations and obtained by Global News.

Between Apr. 1, 2016 through Oct. 31, 2017, employees at the Fort Alexander Health Centre received more than $1.3 million above their salaries, according to the 800-page forensic investigative report ordered by the chief and council at Sagkeeng First Nation (SFN). The board in charge of the centre at the time was fired by the newly-elected SFN council in April of 2017.

The majority of staff were also given a monthly “travel allowance” of $400 and were still reimbursed for travel expenses.

Despite the centre’s Operations Policy, and the federal government’s policies, expressly forbidding honourariums to employees, the audit found the group “set up a system of performance enhancement payments instead.”

Payments in the form of honouraiums for “extra duties” including things like shoveling, gardening, electrical work and “doing a good job” were made to staff, auditors noted.

“We noted that the majority of staff were paid for both miscellaneous travel expenses, as well as given a monthly travel allowance up to $400 a month. There is no rationalization or substantiation for the payment of a travel allowance.” 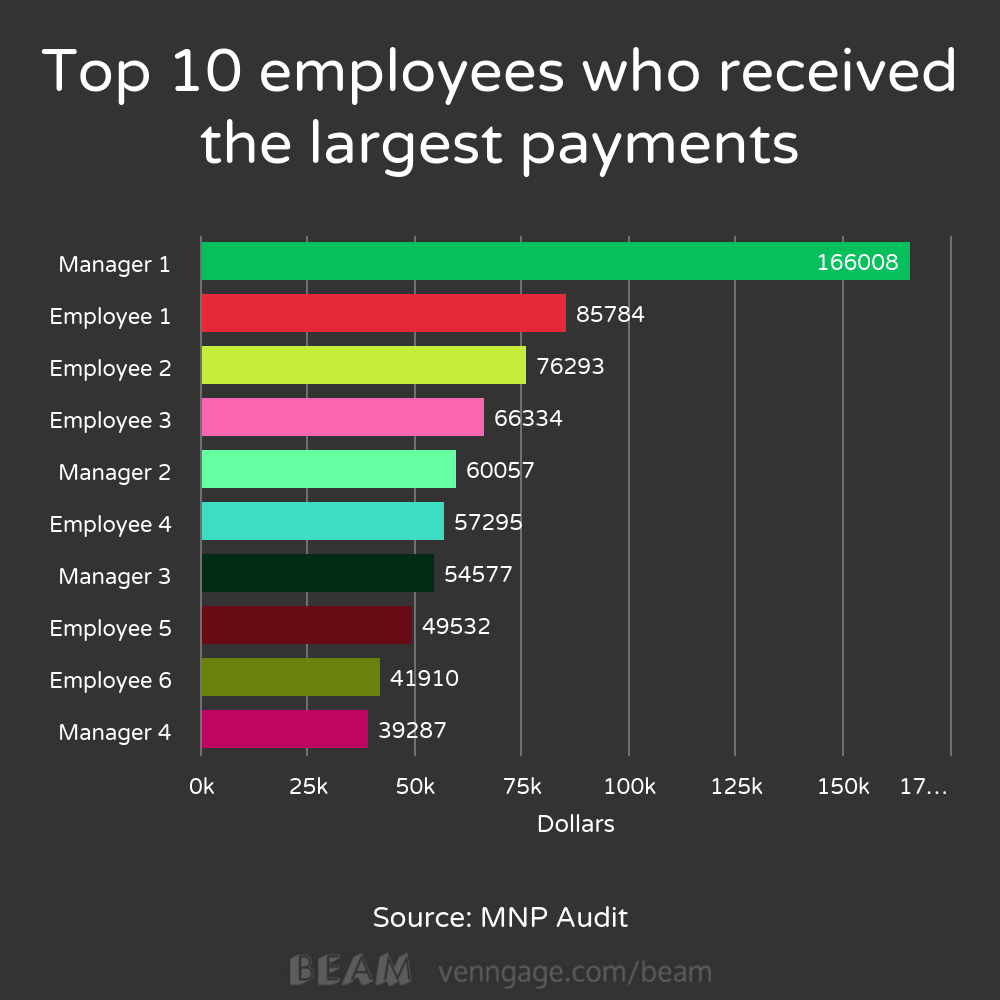 Employees also requested loans or pay advancements, which were allegedly paid back over the next five pay periods. However, there was “no formal process to track the loans.” A total of $64,839 in loans cannot be accounted for, said MNP.

An employee told MNP “the loans are manually tracked on a piece of paper in her office.”

The Centre’s corporate credit card was regularly used for expenses that were not related to the centre, according to the audit, and included entertainment expenses like movies, meals, escape rooms and several restaurants. The card was also used for cash advances.

The investigators found evidence that several vendors who invoiced the centre were actually for personal charges billed back to the Health Centre, including personal purchases for the centre’s Director of Health, Ken Courchene, they said.

Other payments to employees were authorized “without supporting invoices, without documentation or pre-approval and are arbitrary in their amounts.”

“As director of health of a federally funding [sic] institution, Mr. Courchene did not have the authority to allow these transactions.”

The audit pointed the finger mainly at Courchene, for allegedly failing to follow proper procedures.

“Mr. Courchene inappropriately directed the use of Health Centre Funds to the benefit of employees,” the audit alleged. “This was facilitated by circumventing the normal payroll system and paying employees through the accounts payable system, as if they were a vendor.”

It also named several other employees for the same reasons.

Global News made several attempts to speak with Courchene, including phone calls and visits to his home. Courchene told Global News he was too busy to speak but would return the call. He never did.

In the report, he blames confusion with financial policies and procedures put in place by the former chief and band council as the reason behind the questionable spending.

Global News also made several attempts to talk with other people named in the report, but were unsuccessful.

The audit was ordered by Sagkeeng First Nation’s current chief, Derrick Henderson after firing the board of directors of the health centre.

A spokesperson for the department said Wednesday since the review was the “exclusive property of Sagkeeng First Nation”, they’re not required to share the report with Indigenous Services Canada.

“However, as this organization is a funding recipient, the Department has contacted the Chief and Council of Sagkeeng First Nation to obtain a copy of the report for review, and it will work with the community to determine next steps on its findings.

“To date, the department has not received any allegations or complaints related to the Sagkeeng Health Centre.”

So far, no money has been ordered to be repaid, and there has been no further investigation.

If you have additional information, concerns or comments about the allegations to share, please contact our newsroom.