This is Part 1 in a three-part series investigating the state of Canada’s recycling industry. Read Part 2 and Part 3 of the series here.

At the Loraas recycling plant in Saskatoon, 650 bales of worthless plastic pile up outside. Among the towers of packaging: a crumpled parmesan cheese container, a spray bottle of tile cleaner and a tub of garlic mayo.

A lot of this plastic, tightly compressed into cubes, has been sitting here for months, waiting for a buyer. But no one has come knocking.

“This material here is very hard to move,” said Dale Schmidt, manager of Loraas Recycle. “Currently, it moves at a negative value and it only moves once in a while. We’re having a real hard time getting this stuff to market.”

What once could be sold for profit now costs money to haul away, and the notion that Canadians are saving the planet by putting things in a blue bin is proving to be a delusion.

The recycling industry in Canada is having its moment of reckoning.

“It’s a watershed moment. We have to come clean, we have to be honest, we have to get back to truth, to reality with these programs,” said Lorenzo Donini, director of government affairs and municipal relationships for GFL Environmental in Western Canada.

In a months-long investigation, Global News spoke with dozens of communities, companies and industry leaders across the country about the mounting challenges faced by Canada’s recycling industry. The result is dire: with few exceptions, more recycling is being sent to landfill, fewer items are being accepted in the blue bin and the financial toll of running these programs has become a burden for some municipalities.

While recycling has never been a money-making venture, cities and recycling companies rely on the revenue from the products they collect at the curb — things like plastic, paper, aluminum and cardboard — to offset the cost of sorting and processing.

Everything had a value — for a time.

Now, commodity prices have crashed. Some products have no buyers, and recyclers are paying to get rid of some things.

“Everyone has to come to the table and basically get real now,” Donini said.

“If we don’t, we will keep going towards a cliff that we go off of that totally erodes all public trust in the program.”

What put Canada in this position was its dependency on China.

For years, Canada shipped roughly half of its recycling exports to China with the belief it was all being transformed on the other side of the Pacific. 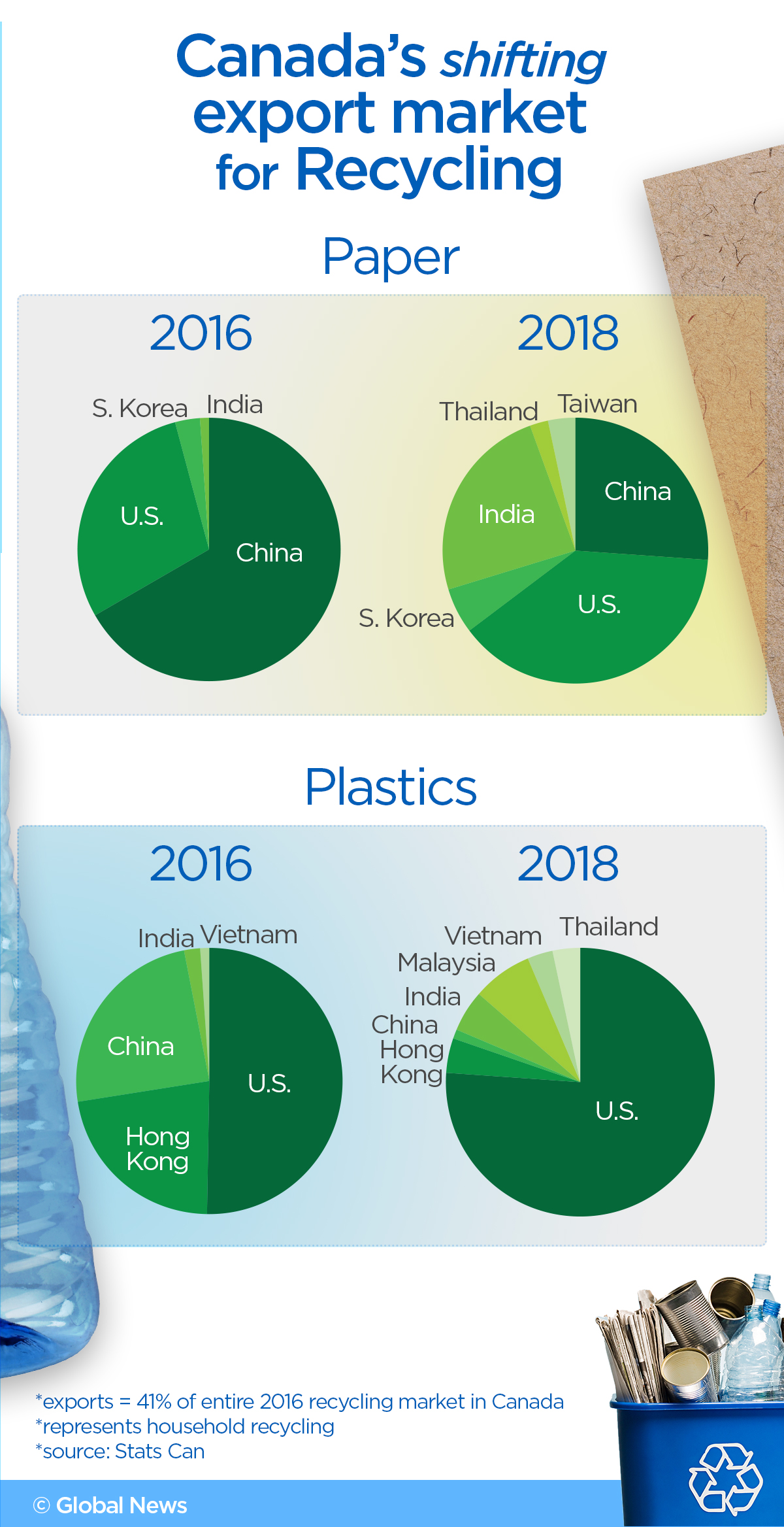 But at the start of 2018, China declared it didn’t want to be a dumping ground anymore, banning 24 types of waste, including certain types of plastic and paper. Any material that is still accepted has to be of the highest quality, meaning the country won’t take dirty pizza boxes and leftover shreds of cheap plastic.

Other Asian countries have tried to fill the void. From 2016 to 2018, a 98 per cent drop in Canadian plastic exports to China was countered by a more than 1,000 per cent increase in exports to Malaysia. But Malaysia couldn’t handle the flood of materials and, in October 2018, banned plastic imports as well. India did the same. Vietnam imposed restrictions. So did Taiwan.

The drug that was China was gone. The message from the rest of Asia was clear: we don’t want your trash.

“Now, we’re going through withdrawal from that drug,” Schmidt said. 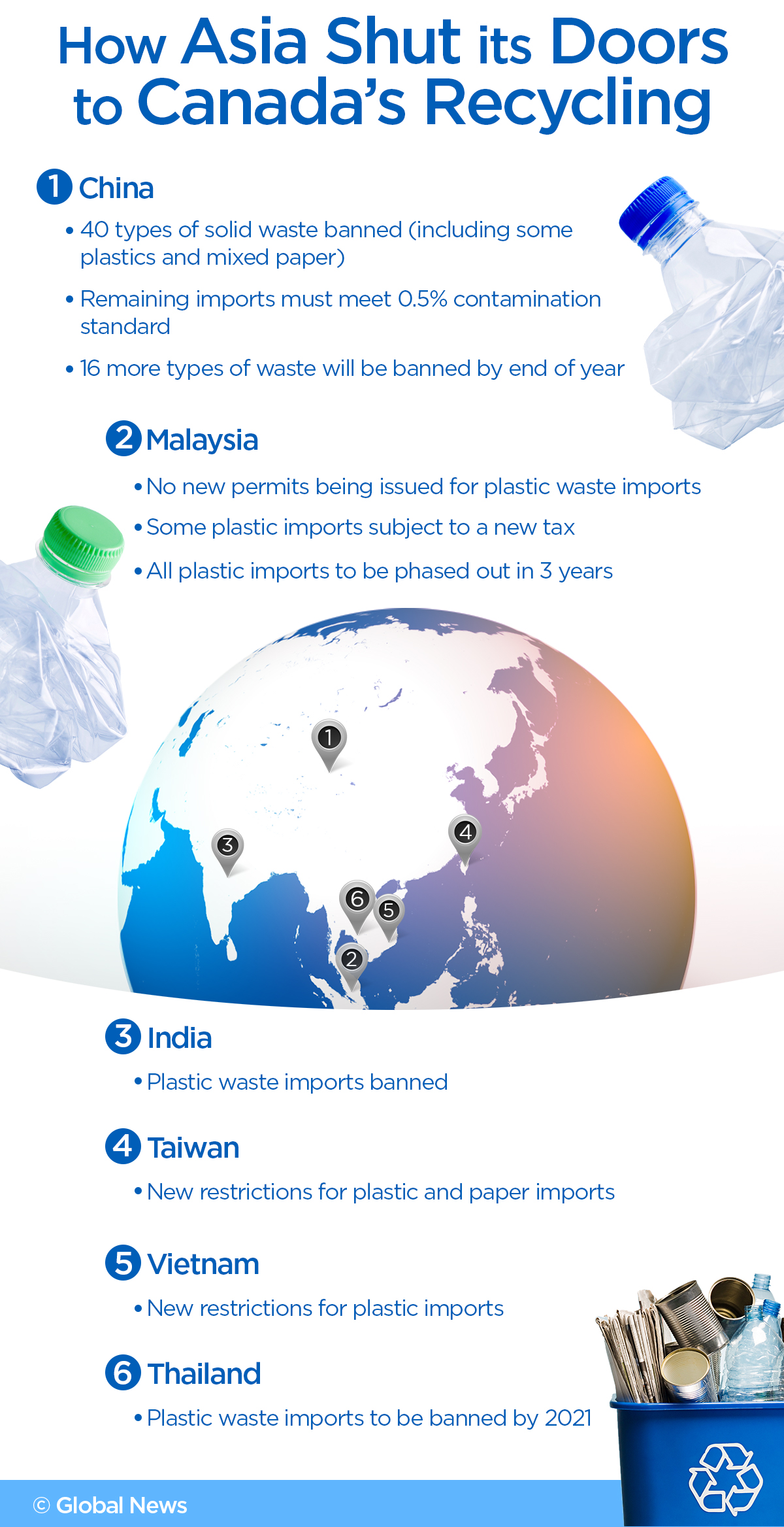 Withdrawal has been predictably unpleasant.

The North American supply of recycling — things like paper, cardboard and plastic — has far exceeded demand, and for months, cities scrambled to find new buyers.

In Cowansville, Que., a recycling facility went bankrupt. The Quebec government responded with a $13-million bailout for the industry and a pledge of another $100 million in the 2019 budget.

In the U.S., some towns have resorted to burning their recycling and even cancelled recycling programs altogether.

While much has improved since the initial shock in Canada, the new reality is dreary.

“The problem is in North America itself. We don’t have enough mills to fully process the material that we’ve got,” Schmidt said.

The fallout is that more recycling is ending up in landfills than at any time in recent memory.

It’s measured by something that’s called the residual rate — the leftover. The residual rate tallies how much of the recycling a plant receives actually ends up being trash.

“(At) a good plant, the rule of thumb was that if you could keep your residual rate to eight to 10 per cent … that was a good measure,” Donini said. “Now, you’re looking at more of a 25 per cent residual rate if you’re doing well … I’ve heard of residual rates as high as 40 per cent.”

“We need a very high-quality standard of material to be able to move at a good value so, ultimately, some materials are removed from the system and end up as garbage,” said Matt Keliher, general manager of solid waste management services for the City of Toronto.

Instead of landfilling products at the end of processing, some cities have simply told residents they will accept fewer items to start with — a move contrary to the ethos of recycling.

“We wanted to make sure that the items that we collected in our blue bags were able to be recycled to be made into new products,” said Olivia Kwok, the city’s supervisor of waste and diversion programs.

Items no longer accepted for curbside recycling include glass bottles, single-use cups such as coffee and yogurt cups, plastic clamshell packaging – the type used for berries and pastries, chip cans and non-deposit Tetra Pak containers, which are commonly used for soup and broth packaging.

“Those are items that go to the garbage,” Kwok said. 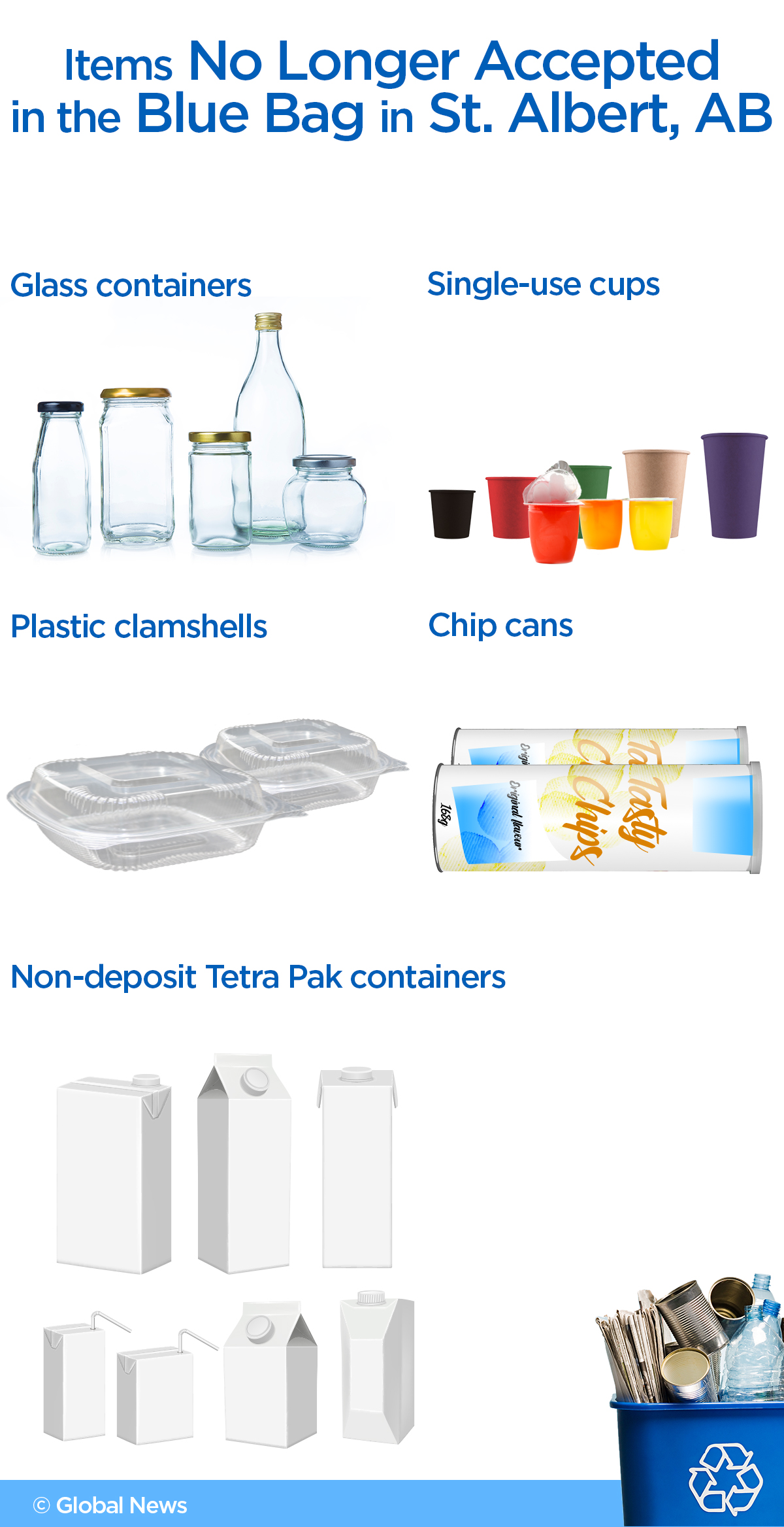 “Every resident wants to do more, not less, and we share their frustration. We’d love nothing more (than) to come out and say, ‘Hey, we can accept these materials,” said president Francis Veilleux. “But the fact is today we’ve gone just a little bit too far. We need to take a step back, refocus on the acceptable materials, and let’s do those right and make sure they get marketed.”

Determined not to send his products to a landfill, Schmidt of Loraas Recycle in Saskatoon was paying for someone to take his plastic film.

“Then, finally, that company closed … and the market for plastic film or low-density polyethylene totally collapsed,” he explained.

Without a buyer to take it, plastic film had to be cut from Loraas’ recycling program. Now, it goes straight to the landfill.

READ MORE: ‘It doesn’t belong in our landfills’ — What to do with your old electronics

EFS-plastics, one of the few processing plants that accepts plastic film in Canada, is turning down multiple requests a week from recyclers and municipalities across North America desperate to offload their product.

“It’s purely a matter of capacity that we can’t do it for them,” said Eadaoin Quinn, director of business development and procurement for the company, which is located outside of Stratford, Ont. The EFS-plastics plant is taking all that it can, but it simply can’t absorb the world’s excess supply.

The crossroads where the recycling industry finds itself may hold its biggest test to date: how to find a new way forward and, perhaps, a new mantra — recover, reinvigorate and reinvent.

“I think there is nothing about this situation that can’t be salvaged. But it does need some course correction,” said Donini of GFL, optimistically at first.

But then he warns, “If we don’t make these changes, we are going to start flirting with real disaster.”

— With files from Christian D’Avino