B.C. has few friends among the provinces, but Quebec has bigger rivals: poll

Canada — as a federation, it’s fractured, but whole.

That’s apparent from the latest survey by the Angus Reid Institute, which shows a country where there’s closeness between provinces in one region that cools steadily as you travel further east.

But there’s one emotion that appears to unite Confederation: negative feelings about Quebec.

In Western Canada, you’ll find provinces that feel strong connections to one another — with the exception of B.C.

Asked whether there are any other provinces that they feel are “especially close or friendly” toward their own, 77 per cent of Albertans mentioned Saskatchewan.

Across Canada, that was the highest share of respondents who said they felt close to another province. 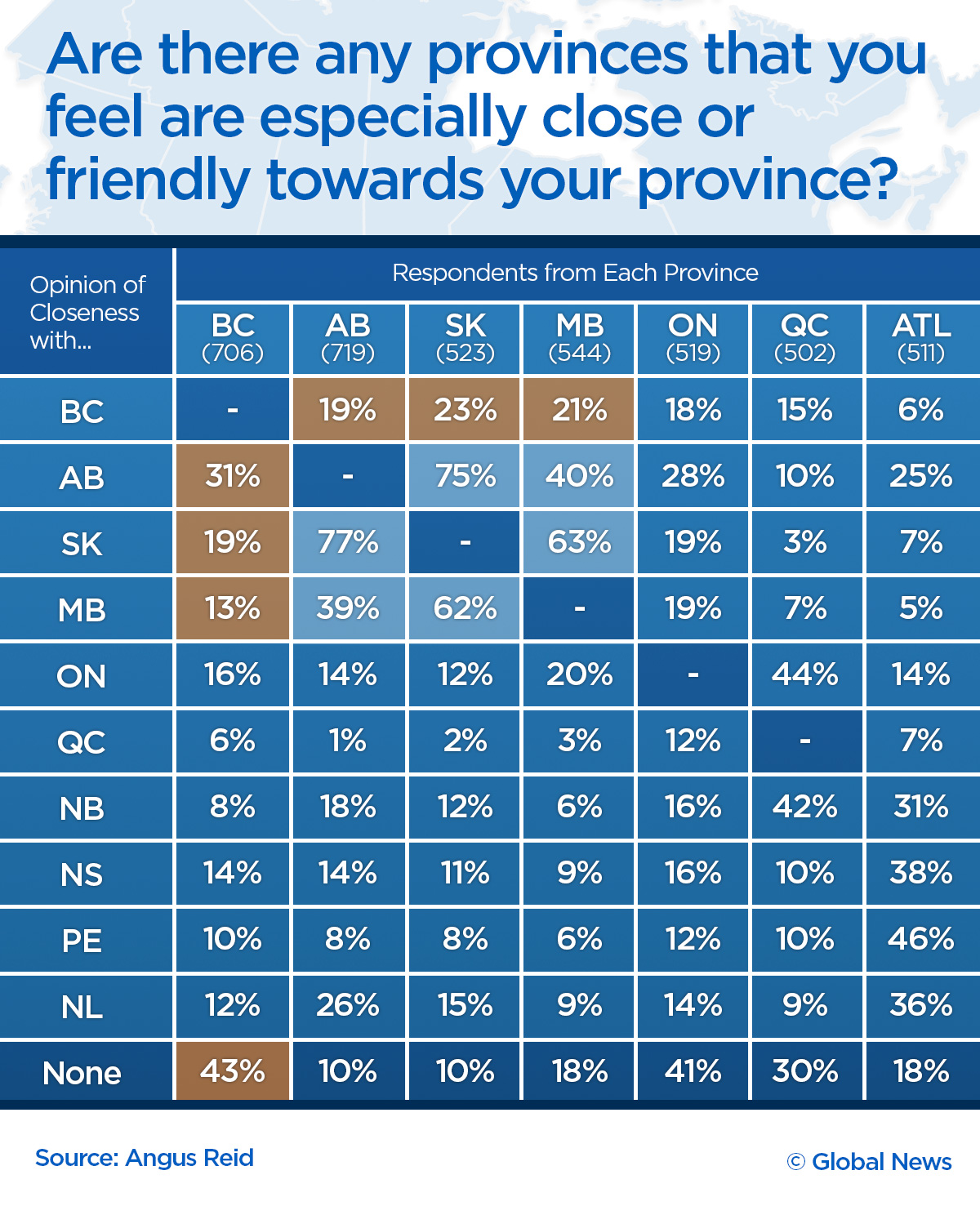 Second to them were Saskatchewanians — 75 per cent of respondents in that province said they felt Alberta was especially close to them.

Many there (62 per cent) also appeared to feel a kinship with “friendly” Manitoba, where 63 per cent of respondents shared those feelings.

B.C., however, was the outlier in Western Canada.

Asked which other provinces they felt were close or friendly, the highest share of British Columbians (43 per cent) said “none.”

That was more than any other province said “none” — although 41 per cent of Ontarians said that, and the survey had a 2.5-per-cent margin of error.

Out of the provinces themselves, British Columbians appeared to feel the strongest kinship with Alberta (31 per cent), and the feeling wasn’t exactly mutual — 19 per cent of Albertans said the same about their western neighbour.

READ MORE: Western Canadians still feel more connected to their province than to country as a whole — Ipsos

Angus Reid Institute executive director Shachi Kurl said that didn’t necessarily represent a significant difference, but the survey did find a “fairly high level of hostility” on both sides, she said.

Much of this could be connected to the simmering animus over energy and pipelines between the two provinces.

“You’ve got B.C. that’s come through an economic downturn less scathed than Alberta, you’ve had Albertans dealing with a perfect storm of some really dreadful economic blows over the last couple of years,” Kurl told Global News.

“The Fort McMurray fires, the economic crisis going back to 2008 and, of course, the plunge in oil prices, have all had a very devastating effect on the psyche or the mindset of Albertans.

“Indeed, for Albertans, when they hear British Columbians are not supportive of you getting your natural resources to market, it is something that indeed frustrates them.”

The frustration becomes more obvious when looking at answers to the question, “Are there any provinces that you feel are less close or unfriendly towards your province?”

In B.C., 47 per cent answered Alberta. Meanwhile, in Alberta, 57 per cent responded B.C.

“The country is not feeling very much like a family,” Kurl said.

“It’s feeling like blocks of factions within the sibling relationship, where you’ve got one or two ganging up here, one doing their own thing, four that don’t have a problem with each other but don’t talk to them about the rest of the country.”

Provinces’ strong feelings about Quebec are even clearer when looking at the responses to this question.

Across Canada, the strongest share of respondents in every province save for B.C. said they felt Quebec was less close and unfriendly toward them.

This feeling was most pronounced in Alberta, where 81 per cent of respondents thought Quebec felt this way.

People in Quebec, however, didn’t appear to feel nearly as strongly about other provinces as they imagined.

The gap was even wider when it came to Saskatchewan. There, 74 per cent of respondents thought Quebec was “less close” or “unfriendly,” while in la belle province, 28 per cent thought Saskatchewan felt this way.

“To look at it a different way, Quebec appears to have more rivals, if you will.”

The Angus Reid Institute conducted an online survey from Dec. 21, 2018 – Jan. 3, 2019, among a representative randomized sample of 4,024 Canadian adults who are members of the Angus Reid Forum. The sample plan included large oversamples in some regions that were then weighted back to provide a national snapshot. For comparison purposes only, a probability sample of this size with this sample frame would carry a margin of error of +/- 2.5 percentage points, 19 times out of 20. Discrepancies in or between totals are due to rounding. The survey was self-commissioned and paid for by ARI. Detailed tables are found at the end of this release.