While some people have voiced concern over the lack of traditional protein in the guide, University of Manitoba’s Associate Professor of Community Nutrition Dr. Joyce Slator says it doesn’t mean you have to cut it out entirely.

“People are really wanting to experiment with more of these plant-based proteins in their diet. Look at the success of the A&W meatless burger, they ran out.

“I think this gives people some guidance and permission to move in that direction, but without telling people you need to become a vegetarian.”

Replacing meat with beans may seem like a hard feat, but dietitians disagree. 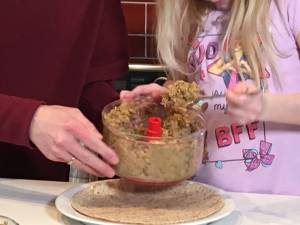 “Fifteen to 25 grams of protein is what we need in a serving, three to four times a day, so if you had half a cup to a cup depending on the beans or the lentils would get you there and then you pair that up with your grain of choice like quinoa or whole wheat. Then that’s going to bump up to five grams of protein and there’s no meat there,” registered dietitian, Jorie Janzen said.

With the changes, some people are concerned their grocery bill will be a lot higher.

“There’s no doubt that eating whole foods fresh is expensive and depending on where you live in Canada it’s going to be insanely expensive.

“So its figuring out how to add a little bit more to your daily environment. Sometimes it will be getting the fresh where you have to prepare it yourself and wash it and cut it up,” Janzen said.

Even if your grocery bill could stay the same, experts say your preparation time will probably increase.

“We need to not just throw this out to people and say ‘here’s your food guide’, we need to be saying ‘how do we get these people — many of whom haven’t spent a lot of time making these basic foods — how do we get them tooled up to use these foods in a way that doesn’t take a whole bunch of time’.”

The government has prepared a list of ways to help people embrace the Food Guide while still sticking to their budget.

They are expected to come out with more serving-based information in the next few months.