Rahaf Mohammed will no longer use her family name as she starts her new life in Canada.

After a frantic 10 days that saw the Saudi Arabian teen flee her family, barricade herself in a Thai hotel room, galvanize international support over social media and ultimately be granted asylum in Canada, Mohammed held a brief press conference on Tuesday in Toronto to thank Canadians for welcoming her.

“I would like to start by saying thank you,” she said in a statement in Arabic translated into English moments later.

“I am one of the lucky ones. I know there are unlucky women who disappeared after trying to escape.” 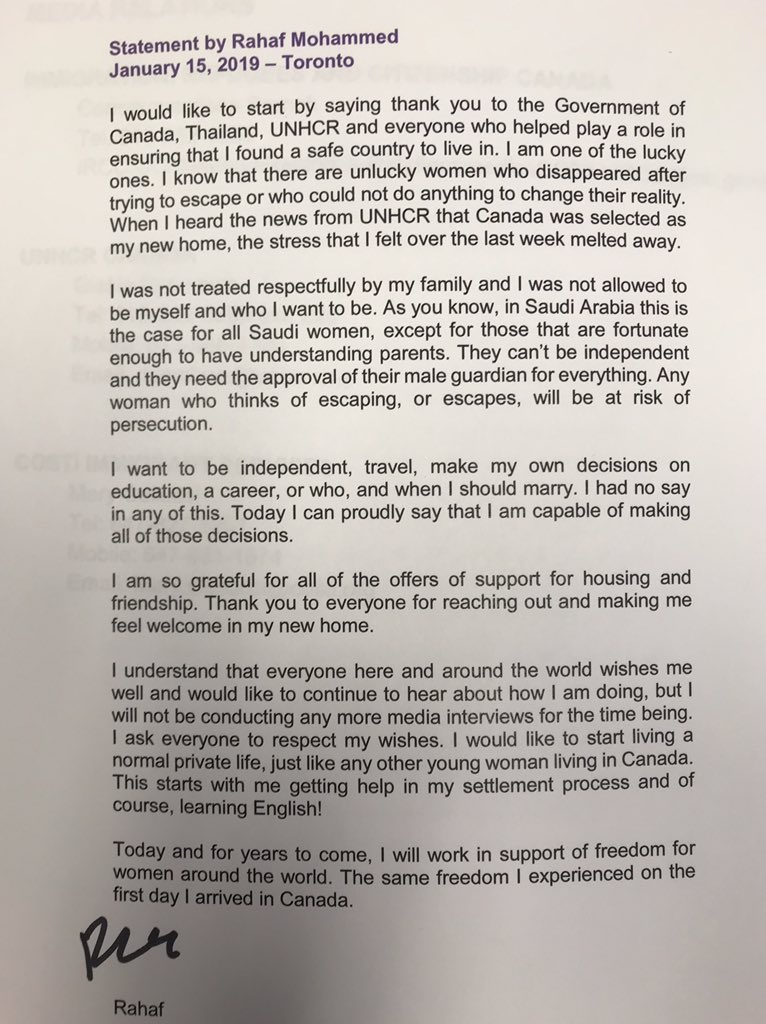 Mohammed did not take questions but the head of the immigrant support centre assisting her confirmed to reporters that she has decided to drop her family name, al-Qanun, and will be known going forward as simply Rahaf Mohammed.

“Her family denounced her and so she decided to drop her last name,” said Mario Calla, executive director of Costi Immigrant Services in Toronto.

He also added she will not be doing any more interviews and wants to focus on adjusting to her new life in Canada, starting with learning English.

“She finds it very difficult. What transpired in Saudi Arabia, she does not want to talk about those things. They’re just too sensitive and private,” he said of her decision to do no more interviews. “So she said, I’ll do the three interviews so people know why I’m here and then that’s it.”

Tweet This Click to share quote on Twitter: "She finds it very difficult. What transpired in Saudi Arabia, she does not want to talk about those things. They're just too sensitive and private," he said of her decision to do no more interviews. "So she said, I'll do the three interviews so people know why I'm here and then that's it."

On Jan. 5, 18-year-old Mohammed fled her family while visiting Kuwait and flew to Thailand.

Once there, she barricaded herself in a hotel room and took to Twitter to ask for support saying Thai officials were refusing to process her request to make an asylum claim. Her tweets alleging abuse and the threat of forced marriage prompted a swell of international support.

The UNHCR began evaluating her bid for asylum and despite reports Australia was willing to consider her claim, Canada also said it would be willing to accept her and on Jan. 11, she boarded her flight to Canada.

Calla confirmed Mohammed is a government-assisted refugee and as such, she will have access to government support to help with her resettlement costs for up to a year, and will also receive temporary housing.

But because of numerous death threats being made against her online, Calla says Costi Immigrant Services has also hired private security for her.

She is not being left alone and while Mohammed said she is grateful to be in a safe country, she is also concerned about her safety.

Calla reitereated that concern to reporters because Mohammed, who spoke in Arabic at the press conference, did not take questions.

“That scares her,” he said of the threats. “Her emotions go back and forth.”

The cost for the private security will be covered by Costi Immigrant Services if the federal government does not agree to cover it.

Calla said this is not unusual and they have provided similar services for other immigrants facing threats in the past.

Mohammed will likely be set up to live with a local family for a time as she adjusts to her new life, he added.

During her first week, support workers are focused on teaching her about her rights and getting her set up with things like a social insurance number.

After that, she plans to turn her attention to learning English and living life as a private citizen, and has expressed a desire to go to university.

“”She’s completed high school and she wants to go to university,” Calla said.

“She’s said she’s interested in civil engineering but who knows, maybe there’s a future in politics for her.”