Several winners in the 2018 sold-out Stollery Children’s Hospital Mighty Millions Lottery have a special place in their heart for the foundation.

Teneesha Levy, who lives in Spruce Grove, Alta., is a neo-natal intensive care nurse for the Stollery at the Royal Alexandra Hospital.

Thursday morning, she discovered she was the grand prize winner of a $2.4-million show home.

“I looked over at my husband and said: ‘We won something!’” Levy said. “I was really excited. I didn’t care if it was an iPad or a ski set. It was super exciting for me already.”

When she discovered she had won the more than 6,000-square-foot home, she was floored.

“I didn’t think I would ever win anything but I support the Stollery Foundation. I see what good it does for our babies, our families and our community,” said Levy. “Regardless of if I won anything or not, that’s not the point.

“You’re still winning when you give back.”

Adam Huxley from Wainwright, Alta., won a cash prize of $85,000 in the Mighty Millions Lottery. His son, Dayton, has been in the Stollery’s intensive care unit on and off for six months.

The family was on their way to an appointment for Dayton when they started getting calls from friends, telling Huxley he had won.

“We’re frequent visitors to the Stollery. He’s been in the ICU, the NICU, everything,” said Huxley.

“[Dayton] has had a rough go at times. The reason we invest in buying tickets is because we know what it does for people. We’ve experienced that first-hand.”

Huxley said he’s not sure where his family would be without the Stollery.

“[The Stollery] does an amazing job. That’s more important than anything I’m ever going to win.”

She has a daughter who had three surgeries at the Stollery before she was six months old.

President and CEO of the Stollery Children’s Hospital Foundation, Mike House, said it’s a special moment to tell a family impacted by the Stollery that they’ve won a prize.

“When someone tells us they bought a ticket because their own child has been in the Stollery… and to have that person win a great prize, it’s just so touching,” said House.

Proceeds of the lottery help fund the hospital’s most urgent needs. That includes research, training programs and advanced pediatric equipment for neonatal and cardiac intensive care.

Watch below: The Mighty Millions Lottery winners were announced on Thursday and the lottery brought in money for a good cause while also changing the lives of the winners. Here’s a recap in Thursday’s edition of Health Matters. 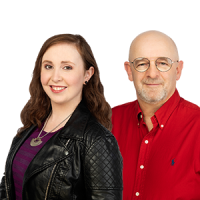