Editor’s note: This photo in this story has been updated. Global News previously published a photo above of 2014 Parliament Hill shooter Michael Zehaf-Bibeau.

A Jordanian arrested in British Columbia over social media posts that allegedly supported the so-called Islamic State and “lone wolf” terrorist attacks has been ordered deported from Canada.

In a ruling Friday, the Immigration and Refugee Board found that Othman Ayed Hamdan was a danger to the security of Canada, saying he had served the “social media agenda” of the terrorist group.

“Mr. Hamdan identified infrastructure in Canada which could be targets for attack. He encouraged lone wolves in the West who could not travel abroad to carry out attacks at home,” the IRB wrote.

“He shared a detailed how-to manual for lone wolves to follow in serving the terrorist agenda of the Islamic State. Additionally, many posts appear to be recruitment initiatives.”

A Palestinian, Hamdan was born in the United Arab Emirates but is a citizen of Jordan. He was accepted as a refugee after arriving at the Canadian border from Washington State in 2002.

He was living in Fort St. John, B.C., in 2015 when he was arrested by the RCMP on terrorism charges stemming from his online posts about ISIS. Although he was acquitted in 2017, immigration authorities arrested him for possible deportation.

Like the unsuccessful terrorism prosecution against him, his immigration troubles were the result of dozens of messages he posted on Facebook in 2014 and 2015. In his posts, he identified a B.C. dam and an Ontario bridge as possible targets.

He also called Martin Couture-Rouleau, who killed Warrant Officer Patrice Vincent in an Oct. 20, 2014 attack, a “hero for hitting evil Canadian forces on their soil.” He referred to Michael Zehaf-Bibeau, who murdered Cpl. Nathan Cirillo two days later, as a martyr. 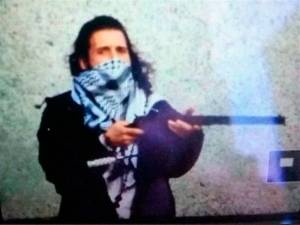 “Mr. Hamdan is commenting on the motivation for these terrorist acts and venerating the murderous actors in these events. His language clearly contradicts his assertion that he did not agree with the acts committed,” the IRB wrote.

The IRB dismissed Hamdan’s claim that he was merely acting as an “alternative news source,” finding he “identified with and allied himself with a terrorist organization and he served that organization’s social media agenda by relaying its messages.”

The ruling comes as Western governments are struggling to deal with social media use by violent extremist groups such as ISIS, which exploited the internet to recruit and disseminate threats, claims of responsibility and other propaganda.

Hamdan was “aware of the context in which he was making these posts, in which the Islamic State was using lone wolf attacks in Western countries in order to spread their influence and spread fear,” the IRB ruled.

“Despite this global context, and despite knowing that his posts would be read by his online followers, Mr. Hamdan still chose to make the posts in question in the hopes that his posts would further the Islamic State’s influence, and aware that his readers might follow through on the terrorist acts that he promoted.”

Hamdan’s lawyer, Peter Edelmann, had argued his client had already been prosecuted and acquitted. “If Mr. Hamdan was a Canadian citizen he would be out, able to pursue the same activities that he was pursuing in terms of his speech.”

The immigration proceedings had been taking place behind closed doors since last fall but Global News successfully fought the publication ban. “Having these hearings in public is jeopardizing my safety in the future as well, here and abroad,” Hamdan said.

The government has come under pressure in recent weeks over its handling of captured Canadian ISIS members, including Muhammad Ali, a 28-year-old from Mississauga, Ont. who used social media to disseminate the terrorist group’s messaging and threats. He has not been charged.

On Tuesday, the House of Commons passed a motion calling on the government to table a plan within 45 days to bring to justice ISIS members.

Global News has confirmed that three Canadian ISIS fighters, three Canadian wives of ISIS foreign fighters and seven children are being held by Kurdish forces in northern Syria, although a support group for families of extremists said it had identified 16 Canadians.

View this document on Scribd
© 2018 Global News, a division of Corus Entertainment Inc.