Confused about carbon taxes and rebates? Here’s what you need to know

If you live in Ontario, Manitoba, Saskatchewan and New Brunswick, you’ll soon be subject to a federally imposed carbon tax.

The federal government is imposing the plan because Ontario, Manitoba and Saskatchewan failed to set up provincially run carbon tax schemes of their own. New Brunswick introduced a tax, but the federal government believes it doesn’t meet federal climate change benchmarks.

3:03 Trudeau unveils the details of carbon tax rebates for Canadians

READ MORE: Liberals say 90% of carbon tax will be given to Canadians in rebate

The tax will be on industry and companies, but it’s expected the cost will be passed onto consumers via higher electricity and heating bills, along with added driving costs from the gas surcharge. They can also expect to see some increases in consumer goods.

The government said 90 per cent of the revenue will be returned to consumers through a rebate — available to Canadians on their upcoming 2018 tax return.

Trudeau has said every resident will be compensated “for the extra costs.”

1:04 Trudeau defends pricing pollution as a solution for climate change
​

Officials also said 70 per cent of people in those provinces will get back more than they end up paying out as fuel costs rise to include the carbon tax.

Here’s how it works:

First off: what is the carbon tax?

That means large industrial facilities (those that emit more than 50,000 tonnes of CO2 equivalent per year) will have to pay a tax on the amount of CO2 they produce, starting January 2019.

Industrial facilities with smaller emissions (those that emit more than 10,000 tonnes of CO2 equivalent per year) are able to opt in to the system.

So, how much will it cost you?

The government has estimated that the annual cost to households will be $403 in Saskatchewan, $202 in New Brunswick, $244 in Ontario and $232 in Manitoba.

Jennifer Winter, director of energy and environmental policy at the School of Public Policy at the University of Calgary, estimated slightly higher costs back when she crunched the numbers in 2017. (At $20 a tonne, the annual cost to households would be $413 in Saskatchewan, $386 in New Brunswick, $283 in Ontario and $273 in Manitoba.) But she said the discrepancies could be accounted for by things like changing energy costs and technology upgrades.

She also stressed that the numbers are estimates, and may change.

If you consume more energy, or if you take public transit, things may cost you more or less, respectively.

What will you get back? 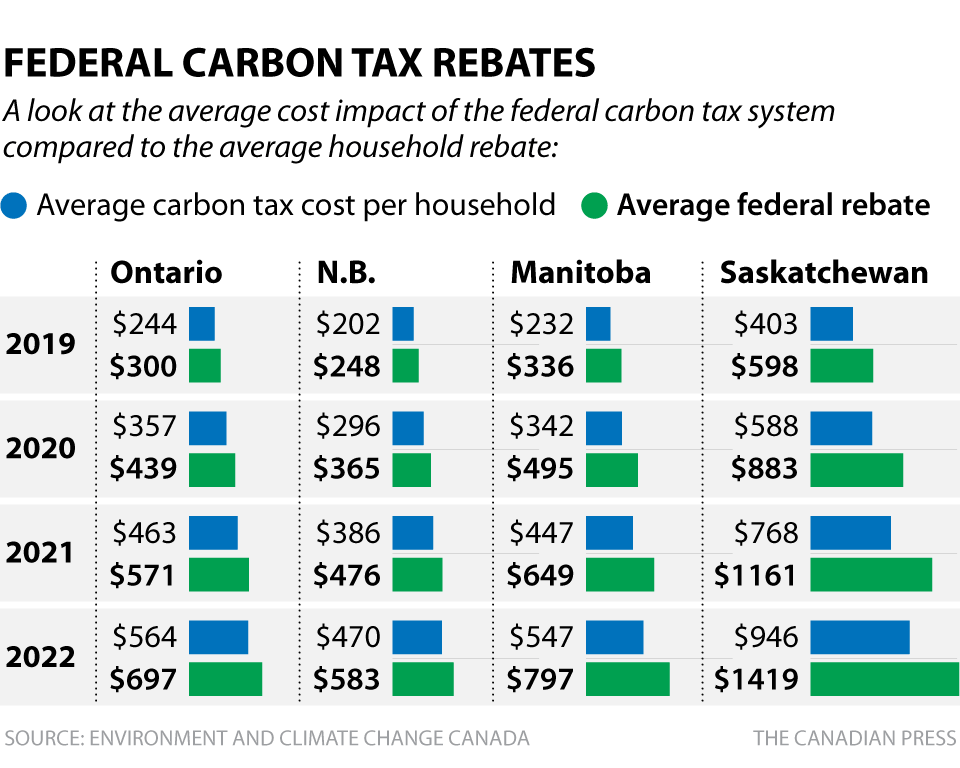 To offset the costs to the average Canadian, the Liberals have announced those in the affected provinces will be receiving a carbon incentive on their upcoming tax return — which ranges from $128 to $609, depending on the province and household size.

The rebate is not based on income — every household in the same province has the same rebate available.

The average household will receive an incentive of $598 in Saskatchewan, $248 in New Brunswick, $300 in Ontario and $336 in Manitoba. That will rise over the years.

People who live outside of census metropolitan areas will get 10 per cent more than those in cities to account for their increased energy use and lack of public transportation as an option to reduce their fuel consumption.

Using the government estimated numbers, the average household will actually make $46 to $195 dollars in 2019 – and it will go up every year.

If you’re wondering how the government can give back more than you’re expected to pay, Winter explained that’s because small firms and businesses who are also feeling the effects of higher gas and heating costs will not be receiving a rebate.

Trudeau has said while 90 per cent of the revenue from the carbon tax will go to consumers, the remaining 10 per cent will be handed out to small and medium-sized businesses, schools, hospitals and other organizations.

Will it change behaviour?

The government has called the carbon tax a “behaviour-changing measure,” but will it work?

The average cost to households is still a “fairly small proportion of total expenditure,” Winter explained, so it’s uncertain how much the average Canadian’s behaviour will change.

READ MORE: Is a carbon tax Canada’s best option to help the environment?

“To get a wholesale shift to more efficient vehicles and to get industry to shift, … it’s going to have to rise to $100 or $200 a tonne,” Dale Beugin, executive director of Canada’s Ecofiscal Commission, previously told Global News. In other words, he explained that the cost to fill up has to jump substantially if people are going to trade in gas guzzlers.

But Winter said the businesses and firms that aren’t seeing the rebate could be the first to change behaviour.

“But on the part of firms since they’re not getting any sort of a rebate or any sort of program that will support them, … they have a greater incentive to try to reduce their costs,” she explained.

— with files from Global’s David Akin and Jane Gerster