South Simcoe police say one student has been airlifted to hospital with serious injuries following a two-vehicle collision involving a school bus and a pickup truck in Innisfil, Ont., Wednesday morning.

Police said the crash happened at 7:45 a.m. at 5th Side Road and 4th Line about 90 kilometres north of Toronto.

Phillips said three students suffered serious but non-life-threatening injuries. One of the three seriously injured students was airlifted to a hospital in Toronto by Ornge Air Ambulance.

According to Phillips, the injuries reported vary from tissue injuries to a serious laceration to the face.

WATCH: Scenes from the Innisfil, Ont. crash involving a school bus and a pickup truck

Innisfil resident Lisa Taylor lives in the house next to where the bus crash occurred and was one of the first people on scene after the collision.

“So I heard a big loud bang and my son and I went to see what was going on,” she said. “That’s when we realized there had been a collision between a truck and a school bus.”

Taylor said she and her neighbours immediately began looking for ways to help.

“There were several people on scene helping students out of the bus through the hatch on the top of the bus, and we were waiting for first responders at that point,” she said. “So I took all the kids that were already out of the bus into my house to make sure everyone was comfortable.”

Taylor said she began getting water and blankets for the students who had escaped the bus.

According to Taylor, the students were forced to exit the bus through the hatch located on the vehicle’s roof because the doors became pinned when the vehicle rolled over.

“All the kids who were able to get themselves out of the bus were doing that while we were waiting for first responders and the Good Samaritans that were here were coaching anyone who was hindered to just sit tight and wait for the first responders,” she said.

Taylor said first responders arrived within minutes and began tending to those who were injured.

“Within seconds there were a lot of people there helping. It was good. I think we had a very good outcome considering what it could have been like,” she said.

Police said the school bus was making its way to Nantyr Shores Secondary School when the incident took place.

According to a news release issued by police on Wednesday evening, following an investigation conducted by collision reconstructionists and the traffic unit, excessive speed and mechanical failure have been ruled out as possible causes.

Police say the investigation determined the school bus had been driving eastbound when it collided with the northbound pickup truck.

Officers say the driver of the bus allegedly failed to stop for the posted stop sign.

According to police, a 73-year-old man from Barrie has been charged with disobeying a stop sign – fail to stop. Officers say he is scheduled to appear in court in November.

Police say the intersection was closed for approximately five hours while officers investigated, however, it has since reopened.

Sgambati said the Simcoe County District School Board, which is responsible for the school where the students were headed, had been notified of the crash.

The board said school administrators went to the scene to support the students.

The town of Innisfil issued a tweet of support to those impacted by the collision.

“On behalf of #Innisfil Mayor, council and staff, our thoughts are with (Nantyr Shores Secondary School’s) students, their worried parents, and everyone affected by this morning’s collision,” the statement said. “Wishing students in hospital speedy recovery.”

–With files from Hannah Jackson and The Canadian Press

The Good Samaritan who ran out to help the students – some who were trapped – seconds after this bus crash. @globalnewsto pic.twitter.com/r64io5ncMd 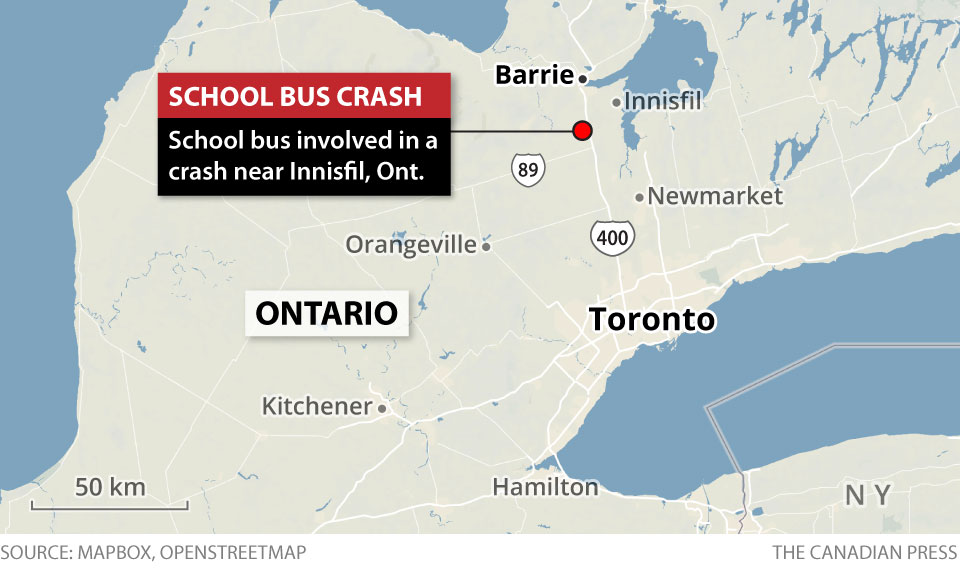 This morning, bus #638 into Nantyr Shores SS @nsstritons was involved in an accident. Emergency services attended the scene along w/ school administrators to support students. Some students sustained injuries & are being treated. We will provide more info as it becomes available.

COLLISION UPDATE #2. Approx 13 other students taken to local hospitals as a precaution. We're appealing for any witnesses to contact us with information. @SCDSB_Schools was notified earlier as well as we believe all patients. #collision pic.twitter.com/H38jpT9V48