There is now no estimated time for re-opening Highway 93 from Radium Hot Springs to the Alberta border due to wildfires burning in the region.

The highway was closed Wednesday due to a risk to the public.

The fires include the Whitetail Creek fire, fires on Mount Wardle, and an additional fire in Bow Valley on the slopes of Lipalian Mountain, east of the Hamlet of Lake Louise.

Parks Canada said that on Tuesday, July 31, a large thunderstorm led to two lightning-ignited wildfires in the Kootenay Valley, south of Kootenay Crossing as well as two wildfires south of Vermilion Crossing in the Vermilion Valley. Both of these fires grew significantly with high winds associated with the storm and are currently estimated at 100 to 200 hectares.

Parks Canada incident commander Jed Cochrane said Wednesday that both fires in the Vermillion Valley are very active, fast and aggressive. Even with helicopters and crews on scene almost immediately, forest conditions are such that the fires were fast-moving.

WATCH: Ominous haze looming over Calgary not so sinister: officials

They are creating a lot of smoke in the Vermillion Valley and some other areas of the park.

These fires have also forced the closure of Highway 93S, near the Kootenay Park Lodge and the trail closure of the lodge.

Structure protection has been deployed to the lodge and a contractor is deploying a high volume sprinkler system.

The now 290-hectare Whitetail Creek fire, which is burning just outside of Kootenay National Park and approximately 40 kilometres north of Radium Hot Springs, is classified as out of control.

Drive BC said drivers should take the alternate routes of Highway 95 and Highway 1 via Golden. A detour is also possible through Lake Lousie, Golden and then back down to the Columbia Valley.

“As soon as it’s safe for traffic to travel through we’ll work to open the highway,” Cochrane said Wednesday.

UPDATE – CLOSED – #BCHwy93 from #Radium to the Alberta Border due to forest fire activity. Alternate route #BCHwy95 via #GoldenBC
Estimated to open at approx 9 PM MST
Next Update 9 PM MSThttps://t.co/rE4ZyMPr2d

This fire did not pose a risk to visitors of Kootenay National Park as of Wednesday, but as a precautionary measure, area closures and smoke advisories were put in place by Parks Canada.

Effective immediately, the Beaverfoot Forest Service Road was closed beyond the 47-kilometre mark (near the Symond Creek Bridge). No vehicles were permitted on the section of road, which will remain closed until further notice.

RCMP said the Trans-Canada Highway was closed near Field, B.C., after a woman was killed in a traffic accident. Mounties said traffic was backed up in both directions.

The fires also forced an area closure of the Rockwall Trail south of Tumbling Pass and Hawk Creek to Simpson River in Kootenay National Park.

This area is closed for the safety of the public and violators may be charged under the National Park General Regulations with a maximum fine of $25,000.

There are five crews within Kootenay and Banff parks fighting the fires with four people in each. There is also a 15 person incident management team working on the Wardle fire complex and working with the BC Wildfires Service. There are also six to seven helicopters trying to fight the fires.

Cochrane said more firefighters may be brought in if it’s determined they can get closer to the bigger fires safely.

The challenge will be the winds and lightning in the forecast for Wednesday, but a cooling trend is also anticipated, which could makes things easier for crews. 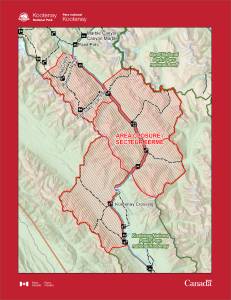 The Whitetail Creek fire has not moved towards the park in the last couple of days, but Cochrane said the Wardle fires, are expected to move predominantly north based on wind forecasts.

One-hundred-and-seventy new wildfires were sparked across B.C. on Wednesday alone.

— With a files from Canadian Press