It’s been a pretty historic week for political babies, both here in Canada and around the world.

On Thursday morning, New Zealand Prime Minister Jacinda Ardern welcomed her first child, a daughter, at a hospital in Auckland. She becomes only the second elected leader in modern history to give birth in office, with former Pakistani prime minister Benazir Bhutto the first.

But about 48 hours earlier, Canadian Democratic Institutions Minister Karina Gould also made a small bit of history, appearing in the House of Commons with her son and breastfeeding him openly on camera as a typically raucous Question Period unfolded around them.

Baby Oliver wasn’t the first child to have a meal in the House of Commons by any stretch, and plenty of babies in other countries have done the same — including recent high-profile moments in Australia and Iceland. But he is the first child of a Canadian minister to do so.

The incident was also notable for the fact that it was recorded by the cameras in the House. Members of Parliament typically cannot be filmed unless they have been recognized by the Speaker, but because Gould was sitting behind Health Minister Ginette Petitpas Taylor as she answered a question about marijuana legalization, the moment was captured.

The camera lingered on the MP for Burlington and her son for almost a full minute, with Gould alternatively watching him and looking up at the health minister. The parliamentarians around Gould appeared completely unfazed.

Gould downplayed the widely-circulated clip on Wednesday, explaining that she had to be in the House for votes that were about to begin, and “baby’s gotta eat.” Responses on social media were largely positive.

“No shame in breastfeeding!” she tweeted. “Clearly still work to do.”

Parliament has made certain adjustments to give new parents on all sides more leeway when they are caring for new additions to their families, but there are still calls for increased accommodations as the composition of the House shifts and more women are elected. There has also been a broader push to end the stigma around public breastfeeding in Canada, after a number of highly-publicized incidents involving women being shamed in stores and restaurants.

Oliver has become something of a minor celebrity on the Hill since joining his mother at work in late May. He was born in March, and Gould took a few weeks off, but MPs do not receive any formal parental leave.

Gould’s caucus colleagues, including Prime Minister Justin Trudeau, have taken turns holding the baby while she addresses the House of Commons and works at her desk. Trudeau actually voted with Oliver in his arms late last month, and MP Andrew Leslie was pictured holding him on May 31. 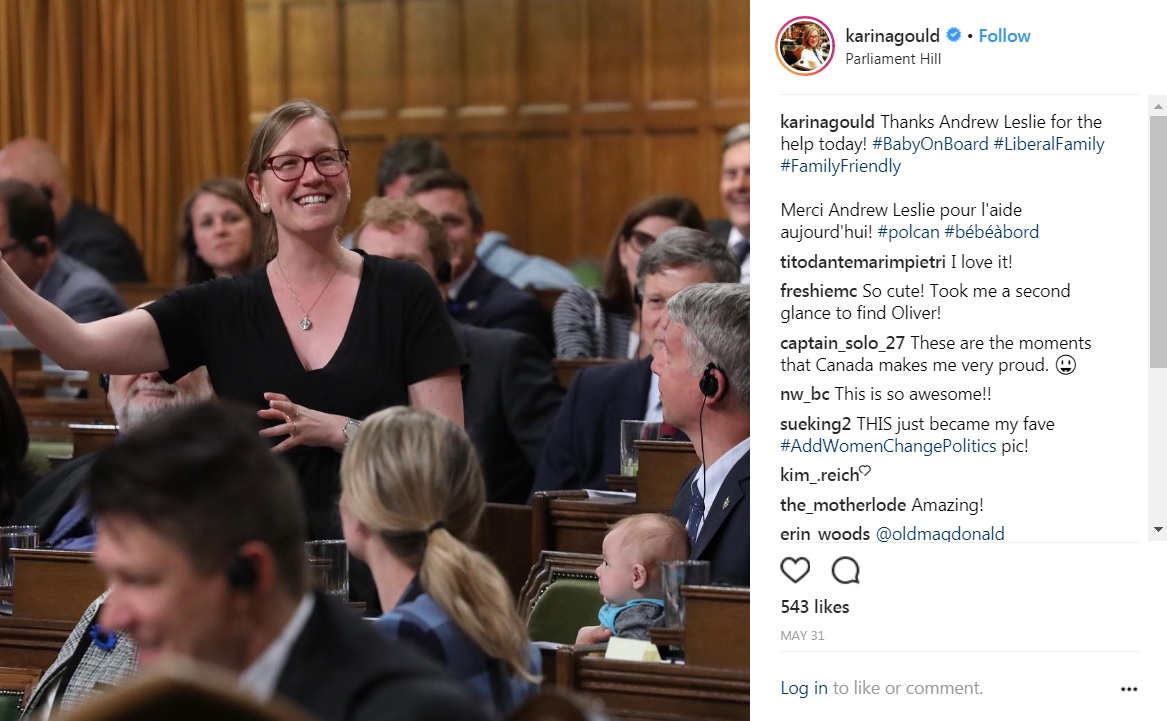 Gould has, for the most part, been carrying out her usual daily schedule of meetings, events, media interviews and appearances in the House of Commons since returning to work.

Her son is sometimes in tow, and sometimes not, but he’s seemingly accommodated even when he isn’t with her.

Thank you @IOGca for having me back this year to talk about democracy in the digital age. Oliver couldn’t make it but love the name tag! #cdnpoli #getcybersafe #DGF18 pic.twitter.com/A5RJw2Ns1e