Pot … or not? Small provinces much more prepared for Day 1 of legalization

In theory a plaza in Scarborough, Ont. is soon going to be home to a legal marijuana store. It’s the only Ontario Cannabis Store location so far announced in the whole of the Greater Toronto Area, home to over six million people.

But it’s a little hard to find. Eventually we narrowed it down to the plaza’s only vacant storefront, a failed dollar store between the FreshCo and a Rogers store.

In Ottawa, the federal Liberals are determined to legalize marijuana before Parliament goes on its summer break. It could happen as early as next week, after MPs, exhausted from a 24-hour filibuster, come back to the Commons Monday morning. After that happens, legal marijuana retail could be a reality in as little as eight weeks.

READ MORE: Marijuana won’t be legal on July 1, and here’s why

But none of the sense of urgency on Parliament Hill had filtered down to Unit 20A, 2480 Gerrard Street East, on the sleepy afternoon when we visited.

The windows are papered over, and there’s still a FOR LEASE sign and a fading eviction notice for the previous tenant in the window, taped there when bailiffs changed the locks last November. When we peered through a rip in the paper, the store was dark and silent.

Has there been any renovation work going on? A woman in a FreshCo shirt on a smoke break snorts.

“I haven’t seen anything.” 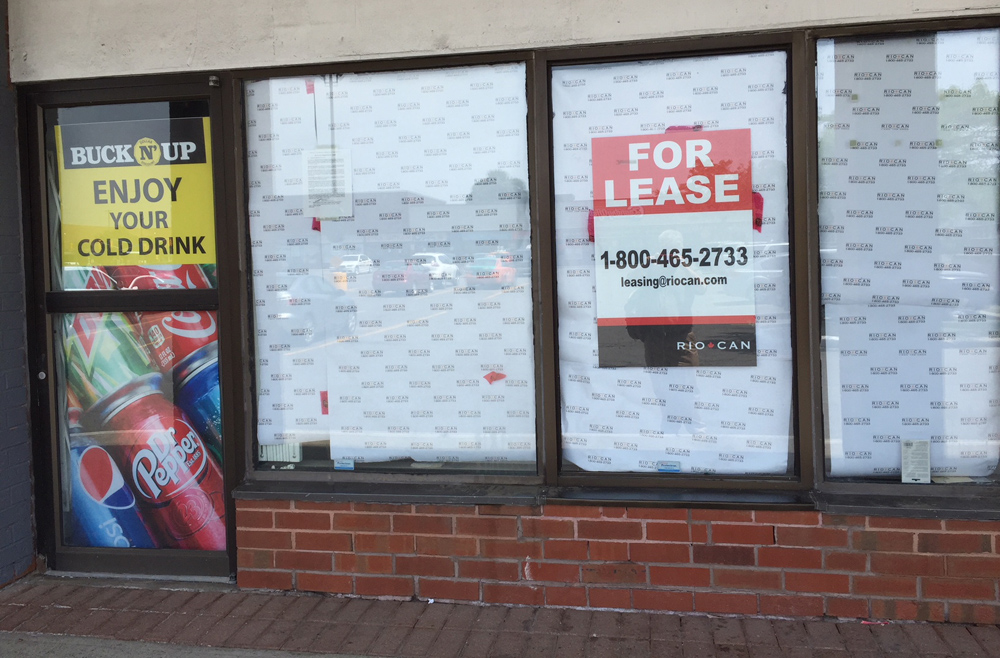 A 14-hour drive to the east, in Saint John, N.B., officials were leading a tour of a brand-new CannabisNB store earlier this week, one of 11 across the province that are complete in every detail and ready to open now. Another nine will follow in the fall, leaving a cannabis store for every 37,000 New Brunswickers.

“Everything in the store is ready to turn on today.” 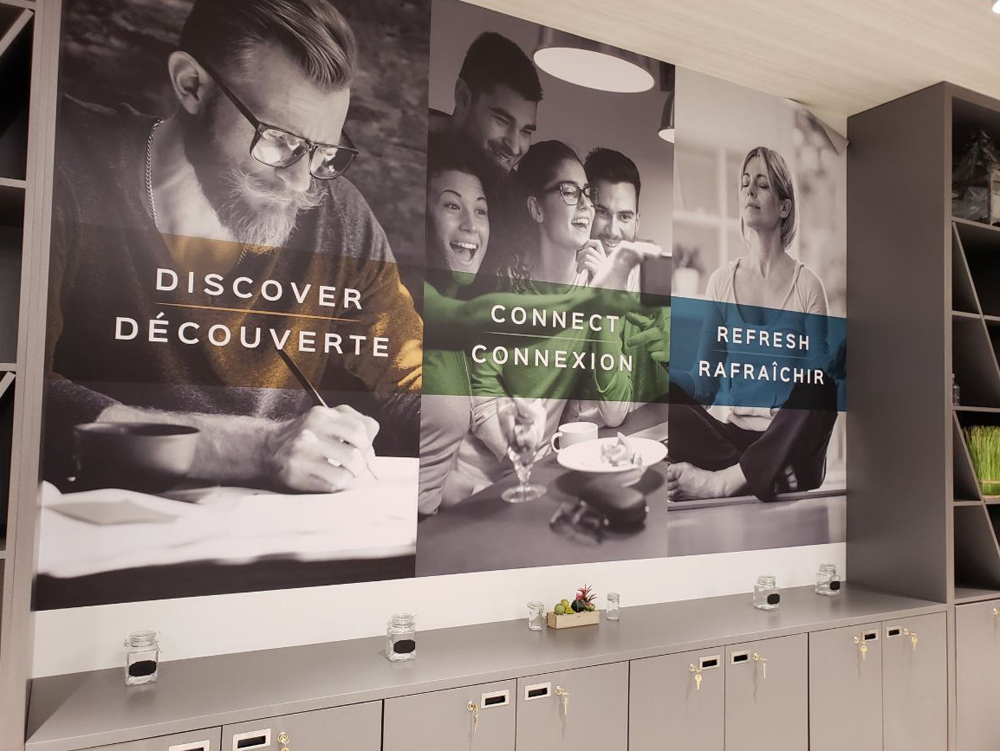 “What I saw in New Brunswick is that they are literally ready for the product to come in from licensed producers, they’ve got barcoding in place, they have the shipping and receiving software in place, they have an entire sales system in place, the computers, every detail that would go into the sale of a product is ready.”

“I don’t think any other province has this level of readiness or detail figured out at this point.”

Officials in Nova Scotia and P.E.I. told Global News that Ottawa has told them that they would have 8-12 weeks notice of legalization between the Cannabis Act passing and it taking effect. If it passed next week, that would work out to a date between mid-August and mid-September.

On Day 1, P.E.I. will have four stores open, one for every 35,000 residents, while Nova Scotia will open nine to start with and three more in the fall, or one for every 76,000 Nova Scotians.

Ontario has announced that it will open 40 OCS stores in 2018, (one per 338,000 Ontarians) but in an email exchange, LCBO spokesperson Nicole Laoutaris would not commit to a number of stores being open on Day 1.

WATCH: A Conservative MP is calling on the government to ban the production of “disgusting” clothing and paraphernalia promoting cannabis, fearing it will become more prevalent after marijuana is legalized and that the items would disrespect Canada Day and the country’s veterans. 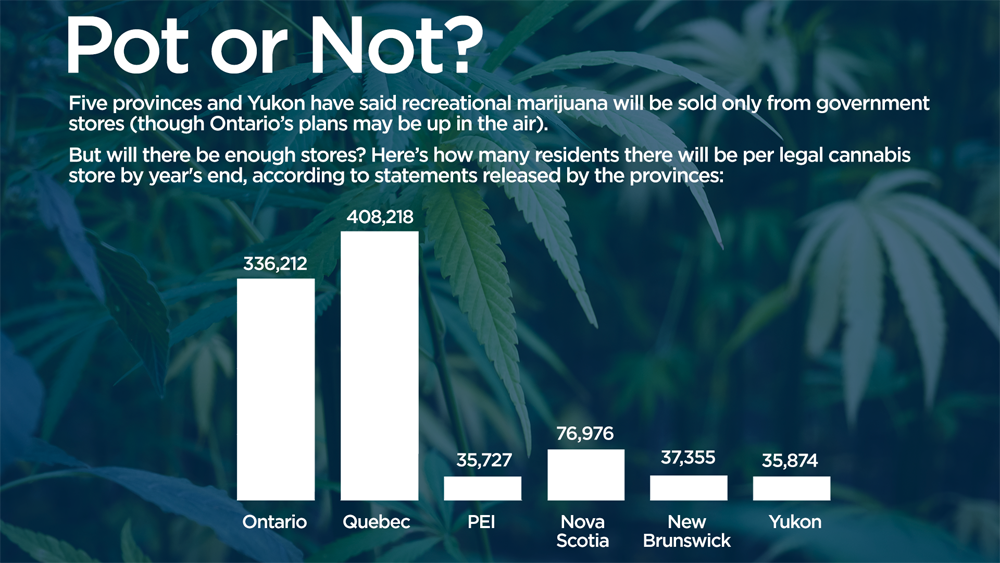 The LCBO did not respond to a request to interview a person with knowledge of the province’s cannabis plans.

The outgoing Ontario Liberal government had planned for legal marijuana to be sold from government-operated stores by unionized employees, just as the province’s liquor stores operate. But when he was asked about marijuana sales during the provincial election campaign, PC premier-elect Doug Ford said he wanted to ” … let the market dictate. I don’t like the government controlling anything, no matter what it is.”

With the federal Liberals determined to pass the Cannabis Act before Parliament goes on summer break, this leaves Ontario’s cannabis retailing plans up in the air at the most awkward possible time.

Ford’s cabinet will be sworn in on June 29, and whoever is his finance minister will inherit the cannabis file.

Ottawa lawyer Trina Fraser thinks it’s too late for Ontario to change course and adopt a private-sector model like the Prairie provinces have done.

“It can be done, but what’s the political appetite for that?”

“You’ve got a very powerful and strong union which has now banked on this job creation for its members, you’ve got public messaging that’s been delivered, consistently, that the government believes that this is the safest, most responsible and controlled way to sell cannabis. That would kind of have to be unwound.”

As well, provincial laws passed last year, which gives the government a monopoly on marijuana sales, would have to be rewritten.

“I’m frankly pretty surprised that at this point, we’re midway through June and we have only even had an announcement of four locations so far. As far as the actual buildouts, I would have thought that would be well underway for a chunk of the stores by now – that does have me concerned.”

“I’m still hopeful that they may get a few locations up and running, but I don’t hold out any hope that we’re going to see 40 on Day 1. Maybe we’ll get there by the end of the year.”

(If Ontario was as well-prepared as New Brunswick or P.E.I., it would be ready to open over 360 bricks-and-mortar cannabis stores on Day 1, which could be before Labour Day.)

“I think Ontario is going to see a delay in legalization,” Anand says.

“I don’t know if they’re going to be in time for September or October. I look at a January launch in Ontario. They’re not prepared yet.”

WATCH: With summer break and an election on the horizon, Quebec politicians are in a mad dash to pass as much legislation as possible. As Global’s Raquel Fletcher reports, the Quebec Liberals passed bills on alcohol, marijuana and extra vacation before the end of session.

On the other hand, New Brunswick can’t wait, Anand says.

“The minister in charge of NB Liquor said to me that they don’t want a delay in legalization, because every day that they’re not opening up is costing them money because they’ve invested so heavily in these stores that are currently sitting empty.”

New Brunswick has been eager to develop marijuana as an economic sector since before the last federal election, when the only expected market was medical, Anand says.

“They realized that in a deprived, economically depressed area with high levels of unemployment, that this was an industry that was really going to change their province.”

“New Brunswick, in particular, has built into their actual economic development plan for the province for years now even before legalization was announced,” Fraser says.

“They were actively seeking producers to come and locate their businesses, and granting very lucrative incentives to locate in their province, so I’m not surprised that they’ve jumped all over the retail side of things, because that’s just how they’ve viewed this: as an opportunity from day one.”