By Bob Weber The Canadian Press

The Alberta government says it is creating the world’s largest boreal forest preserve with new wildland parks in the province’s northeast.

Together, they will make up an uninterrupted zone of protected land more than twice the size of Vancouver Island – 67,000 square kilometres.

“These are beautiful and remote swaths of boreal forest,” Environment Minister Shannon Phillips said Tuesday. “They are untouched, in many cases, by human activity.”

READ MORE: Half of Alberta’s boreal forest could disappear due to wildfires and climate change

Three of the five parks – Kazan, Richardson and Dillon River – were previously proposed under the government’s land-use plan for the Lower Athabasca region. A fourth, Birch Mountains, was previously designated and is being expanded.

The fifth, Birch River, was made possible after Syncrude Canada paid $2.3 million for the area timber rights belonging to the Tallcree First Nation and donated them to the government through a deal with the Nature Conservancy of Canada.

Syncrude will receive conservation offsets, which means the donation can be counted as compensation for other areas the company has disturbed.

Spokesman Will Gibson said the offsets will be used as part of a mitigation program for the Mildred Lake oilsands mine expansion, although they don’t affect the company’s obligation to reclaim the land.

“The scope of the project really appeals to us,” said Gibson. “Creating the world’s largest boreal conservation area shows what’s achievable when we work together for a common goal.”

Oilsands agreements in the area were cancelled in 2012. The government subsequently spent $45 million to buy back oilsands and mineral leases.

The protected forests are home to bison, woodland caribou, lynx and bear. Millions of songbirds nest in their canopy.

“In all those areas, conservation is critically important.”

Wildland parks are intended to protect landscapes and provide opportunities for backcountry recreation. Trails and unserviced campsites are provided in some areas and fishing and hunting is allowed.

Indigenous people will continue to be involved in the parks’ management. Phillips said the province will begin a guardian program, which could put First Nations and Metis people in charge of monitoring, maintenance, education and identification of sacred sites.

It would be similar to what the federal government has been doing in recent parks announcements, but be developed in Alberta, she said.

“It leads into a co-operative management approach to provide joint advice on how to manage those landscapes and to be the boots on the ground.”

“The government of Alberta’s commitment to work collaboratively with Indigenous communities to develop co-operative management plans provides a historic opportunity to have Indigenous knowledge and values influence land-use planning,” he said in a release.

The boreal forest is the vast band of green that stretches across the northern reaches of most of the provinces and into the northern territories. It is considered one of the last, large intact ecosystems on the planet.

The federal government is working toward protecting at least 17 per cent of the country by 2020. 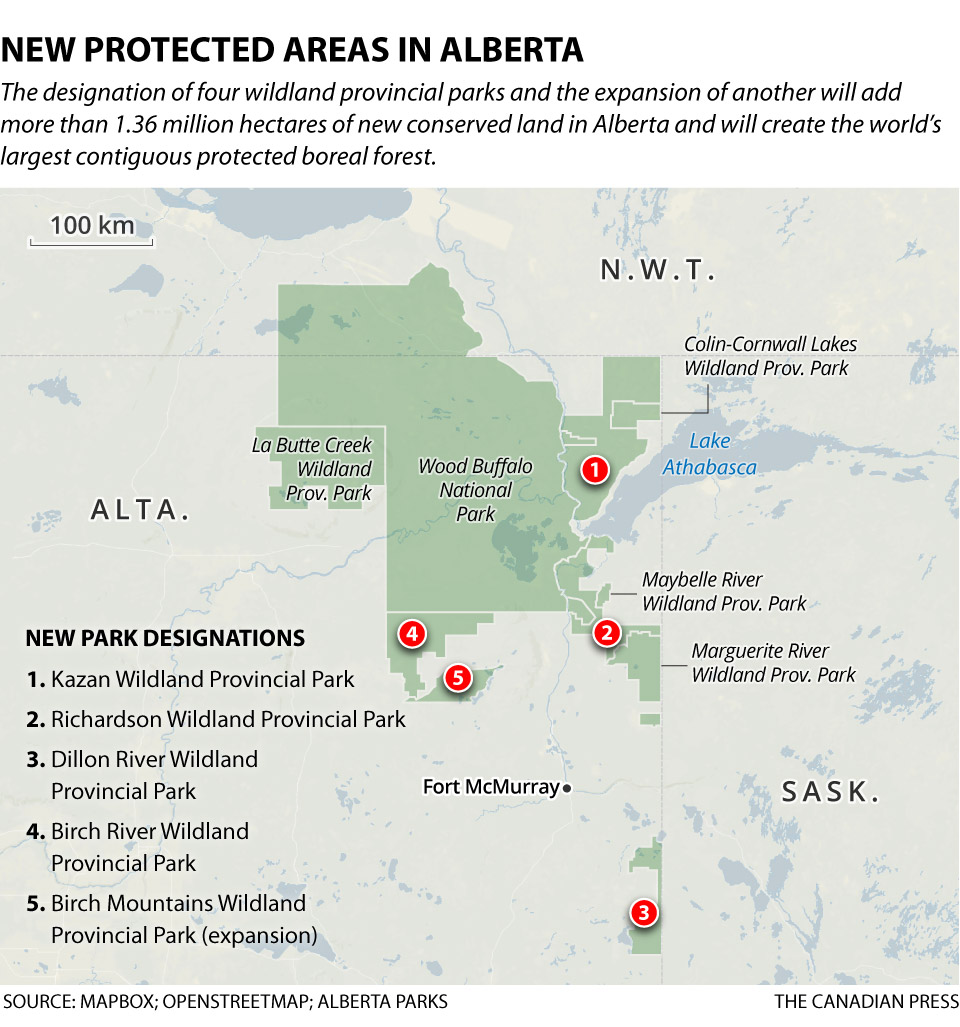