Government confirms pot packaging will be plain, with branding and logos ‘restricted’

The federal government says that Canadians generally support its planned approach to the legalization of marijuana, including detailed proposals surrounding plain packaging and warning labels.

As part of a broader release of the results of its public consultations, Health Canada announced on Monday that all cannabis products sold to consumers will need to be child-resistant, with plain packaging that is a single, uniform colour and does not include any graphics or images.

Packaging must also be “tamper evident,” so that the consumer will know immediately if the product has been opened or otherwise tampered with before purchase.

“(The package) cannot be embossed, shiny or metallic,” according to the department. “The use of branding and logos will be restricted.”

Labels, meanwhile, will need to include mandatory health messages to warn Canadians of the potential risks of cannabis use, a red “stop sign” symbol with a cannabis leaf and the letters THC, plus the product’s THC and CBD content.

The government has provided over a dozen options for warnings, including that “regular use of cannabis can increase the risk of psychosis and schizophrenia” and “adolescents are at greater risk of harms from cannabis.”

Government officials said on Monday that the messages were crafted after an “exhaustive review of the available scientific evidence.” 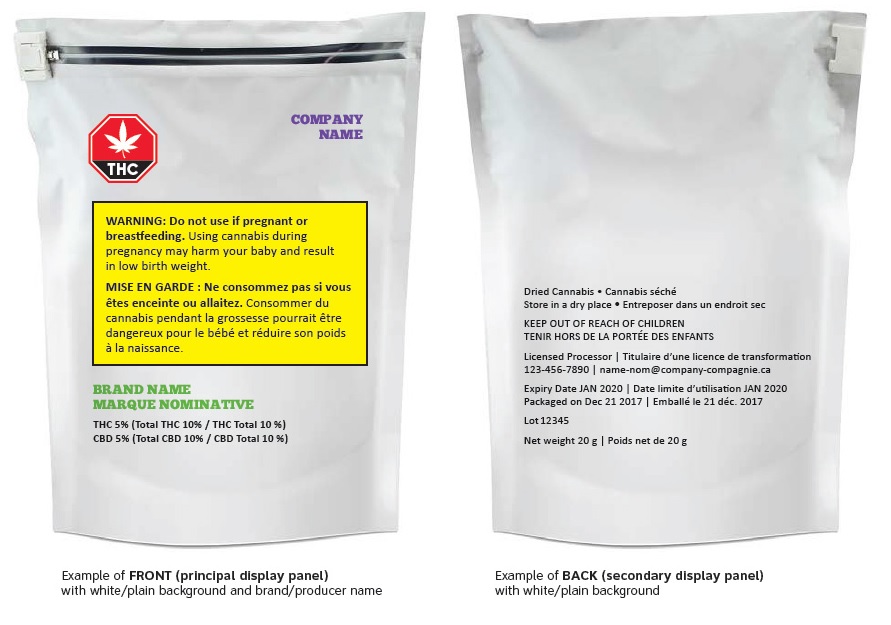 “These measures are consistent with the government’s public health approach to cannabis and the recommendations of the federal Task Force on Cannabis Legalization and Regulation,” Health Canada said.

“They are in addition to the restrictions set out in the proposed Cannabis Act, namely that packaging and labelling must not appeal to youth, not contain lifestyle elements, present testimonials or endorsements, nor communicate false statements.”

READ MORE: Canadians pay $6.83 on average for a gram of marijuana

The Cannabis Act is still making its way through Parliament, and so none of the proposals outlined Monday are final (the provinces are handling the details surrounding how and where legal pot can be sold).

The government launched a 60-day public consultation last fall on its proposed approach to developing federal regulations under the proposed Cannabis Act. It says it received 3,218 responses to the online survey and 450 written responses. Just under 200 “interested parties” participated in roundtables and 343 more participated in webinars.

Canadians, in general, “supported the proposed approach to the regulation of cannabis,” Health Canada said Monday.

The report does outline specific areas in which there were varied responses, however. For example, there was some pushback on plain packaging, and “mixed views” on the proposed concentration limit of 30 milligrams of THC per millilitre of cannabis oil, with some feeling it was too low.

Monday’s report also provides new details about micro-cultivation licenses, for growing marijuana commercially
or for processing it into a final product for sale. Micro-growers (producing cannabis for sale) would need a micro-cultivation licence that would authorize the cultivation of a plant “canopy area” not greater than 200 square metres.

A micro-processing licence “would authorize the processing of no more than 600 kilograms of dried cannabis (or equivalent) per year, or the entire output of a single micro-cultivation licence.”

Cannabis concentrates and edibles (products that can be consumed that contain marijuana) are also touched upon. The government heard feedback that suggested that these products be made available to consumers this summer, along with other cannabis products. But Health Canada seems to have discounted this idea.

“Necessary regulations addressing edibles containing cannabis and cannabis concentrates will be put in place within one year following the coming into force of the proposed Cannabis Act, if it is passed by Parliament,” the government noted.

Finally, the government says it is still considering how to deal with people who wish to participate in the legal cannabis industry but have a history of “non-violent, lower-risk criminal activity with cannabis” like simple possession or small-scale cultivation. It’s possible these people may be able to seek a security clearance and get the green light to engage in the industry.