When Ivy Angerman comes into contact with water, even her own tears, the 18-month-old breaks out in a rash, hives and blisters that leave her in unbelievable pain.

“She used to love the bath and now she’s screaming bloody murder when we have to wash her,” she told People. “It feels like a third-degree burn. She runs around screaming that she’s hot. It’s so hard to watch as a mother.”

The toddler from Hastings, Minn., has been diagnosed with aquagenic urticaria, which is an allergy to water. And while urticaria, or hives, are a fairly common occurrence, this particular condition is extremely rare.

“There are only 50 cases of aquagenic urticaria recorded in medical history,” says Dr. David Fischer, president of the Canadian Society of Allergy and Clinical Immunology. “Hives themselves are very common but the aquagenic variety is rare.” 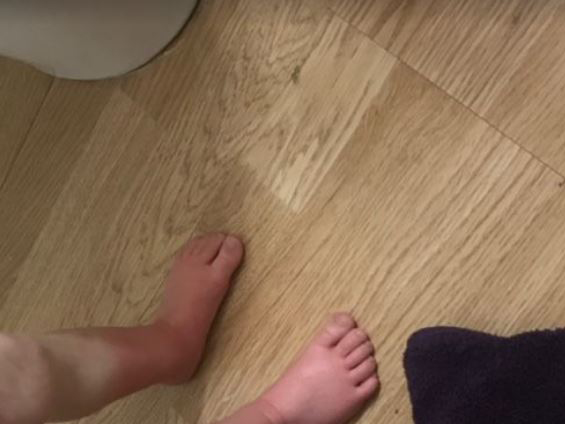 Urticaria can erupt for any number of reasons, including an allergy to a particular type of food, a reaction to very hot or very cold temperatures, or scratching or rubbing.

“When it’s very cold outside, I’ll see a case of urticaria every two months,” Fischer says.

But this is also what could easily cause a misdiagnosis in someone like Ivy.

“It’s often misdiagnosed because a lot of times people develop the hives after they’ve been out in the cold, but the reality is that there was water on their skin and that’s what caused the hives.”

What’s also odd about Ivy’s case is that aquagenic urticaria tends to be more prevalent in teenage girls. Yet, the CBC reported earlier this week of a nine-year-old boy in Grande Prairie who also suffers from the condition.

“The statistics speak to it not being common in a very young age group, but the reality is that a person can start to suffer from hives at any age. They can even start in your 60s.”

There isn’t much that someone with aquagenic urticaria can do to alleviate their condition aside from taking an antihistamine before being exposed to water — “and they’re usually not that great,” Fischer says. In fact, Brittany told People that Ivy is starting to become immune to them, so she only takes them on bath days.

Aside from that, sufferers are advised to wear moisture-wicking clothing and to keep an even keel temperature because they’re susceptible to their own sweat. Fischer says using a barrier cream (one that repels water) could help, as well as taking very quick showers, never baths.

READ MORE: Your smartphone could be damaging your skin

Because there’s so little known about the condition, Brittany has fears about how it might transform itself with time.

But Fischer says, the former scenario at least, is highly unlikely.

Story continues below advertisement
“This tends to be a reaction at the skin level. The proportion of allergy cells are really high on the skin and there are fewer in the mucosa [the lining of the mouth and throat],” he explains. “People who get hives from eating or drinking cold foods and drinks can do so with no problem. You have water in your bloodstream and that’s not an issue, but the problem is when it gets on the skin.”

Right now, Brittany’s only recourse is to limit Ivy’s exposure to water and only give her baths twice a week unless she gets really dirty from playing outside.

“The entire situation is just mind-blowing,” she said. “We want people to know this exists and how life-changing it really is.”