Most women wish they could come up with a plan that would allow them to wear their wedding dress more than once, but for one new bride in Wales, the opportunity presented itself through unique circumstances.

Janine Osborne-Bowring climbed eight mountains in eight days earlier this month to raise awareness for vasculitis, an inflammation of the blood vessels — and she did it clad in her full-length sequined and embroidered wedding dress.

According to her JustGiving crowdfunding page, where she’s raising funds for Vasculitis UK, the 34-year-old personal trainer was diagnosed with the disease in 2015. Her symptoms started with joint pain and exhaustion but quickly turned much more severe. It took doctors eight weeks to diagnose her.

“We decided to climb eight mountains in eight days as it took eight weeks for doctors to diagnose my illness,” she tells Global News. “I decided I would do it in my dress as I could imagine the pictures, and what amazing memories it would bring us in the future.”

Osborne-Bowring and her husband, Matt, scaled some of the tallest mountains in Wales, including Mount Snowdon and Pen y Fan, Fan Brycheiniog and Waun Fach in the Black Mountains, and Mynydd Sygyn, Grib Ddu and Moel y Dyniewyd in Snowdonia National Park. Both were dressed in their wedding outfits for the climbs, only bolstered with proper hiking boots.

“I was worried at first whether I’d be well enough [to do the climbs], but I’m a fitness instructor and personal trainer, so I made sure I had prepared my body, both physically and mentally,” she says. They also took rest breaks of a few days between each climb.
Story continues below advertisement 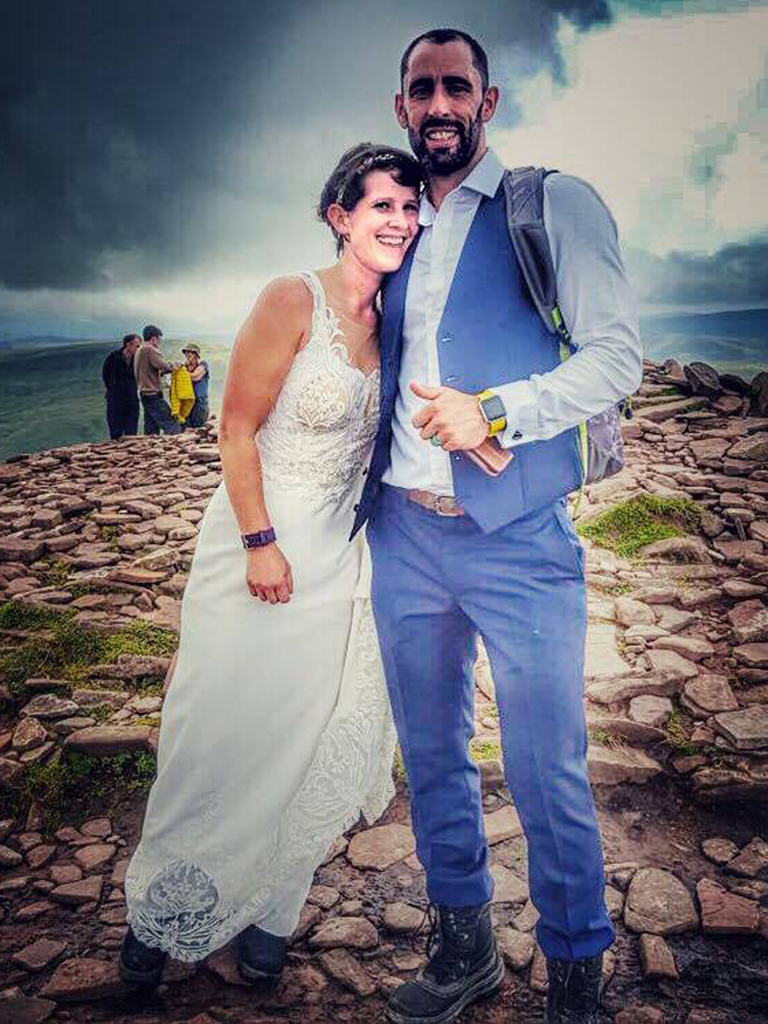 The newlywed is currently in remission after undergoing intense chemotherapy to treat her condition, granulomatosis with polyangiitis (GPA/Wegener’s), which affects the upper and lower lungs, respiratory system, and can also involve the kidneys, lungs, eyes, ears, throat, skin and other body organs. And despite continuing her fight against a disease that can never be cured, Osborne-Bowring also hopes to run the Cardiff Half Marathon in October.

“I ran it last year whilst still recovering and being on steroids, and whilst injecting Methotrexate, so I would love to do it again to show myself how far I have come,” she says.

So far, the couple has raised nearly 1,600 GBP (over $2,600) with their climbing initiative, and Osborne-Bowring hopes to spread her personal message of survival, as well as awareness for vasculitis, through their journey.

“The message I would like others to take from this would be no matter how hard it gets, keep climbing because it will be worth it, and never give up because you’re worth it.”

READ MORE: Couple gets married on Mount Everest and the photos are out of this world

While theirs would certainly be a honeymoon for the ages, the bride says that they have planned a two-week trip to Hawaii in October.

As for her dress, Osborne-Bowring has no intentions of relegating it to a dark corner in her closet.

“The last thing I ever wanted was to box up my dress, so I had already planned to re-design it one day so I could wear it on special occasions.”