An Indigenous man from Meadow Lake, Sask., said a memorial for Chester Bennington helped him with his own depression.

Christopher Gregoire, 19, organized the vigil for the late Linkin Park singer outside of SaskTel Centre in Saskatoon on the August long weekend.

“I’ve been a fan of Linkin Park since I was a kid,” Gregoire said over the phone on Monday.

“When I was a kid I never really understood the lyrics until I got older and then I had a relation to Chester’s music because he would explain how everyone would feel and how hard it is to be open about it.”

When Gregoire heard the news of Bennington’s death in July, he couldn’t believe it.

“It’s hard to see somebody that you really look up to and know that they lost their battle … so it really did impact me,” he said.

“I put [the vigil] on to celebrate Chester’s life and to try and gather everyone who Chester has influenced or helped with his lyrics.” 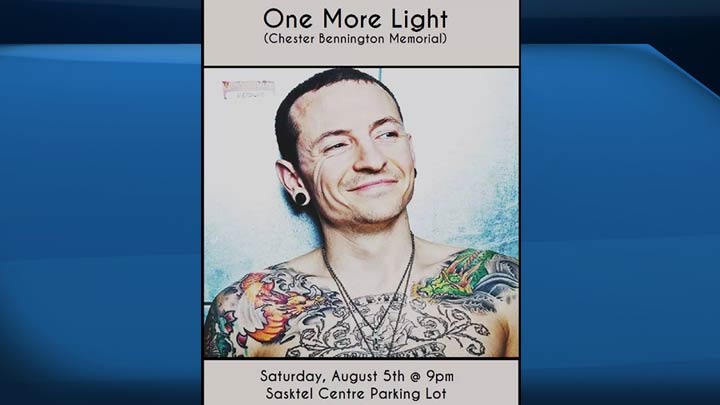 Gregoire said his expectations were exceeded with the turnout for the memorial, which was also aimed to raise mental health awareness.
“I don’t really think that people understand how serious mental health is,” he said.

“It gave me a way to kind a show how much Chester was an impact in my life and how much he helped me with my struggles … and also just seeing how many other people that Chester has helped and touched with his music.”

Moving forward, Gregoire said he’s going to be seeing a psychiatrist and seeking help was the best thing he’s done.

“It is hard to open up about it but it’s the best thing you can do because it shows you that you’re not alone … It helped me anyway, knowing that other people are always going to be there for me when I need it,” he said.

“People with depression and mental illness always feel like they’re alone, like I did, but during this memorial I wanted to show people that ‘you’re not alone.’ There’s always going to be somebody that will listen because your life is more important than anything else.”

The Canadian Association for Suicide Prevention, Depression Hurts and Kids Help Phone 1-800-668-6868 all offer ways of getting help if you, or someone you know, may be suffering from mental health issues.