Canada has been ranked third-to-last in a detailed new study comparing health-care systems in 11 developed nations, managing to beat out only France and the bottom-ranked United States.

The study, published this week by a New York-based private research foundation called the Commonwealth Fund, focuses largely on America’s dismal performance, but also reveals stubborn weaknesses in Canada’s system that keep us lagging behind top-ranked countries like Australia, the United Kingdom and the Netherlands.

READ MORE: Here’s why Canada gets a failing grade in treating the obesity epidemic

According to the study, which relies on 72 metrics grouped into five distinct categories (Care Process, Access, Administrative Efficiency, Equity, and Health Care Outcomes), those weaknesses include Canada’s comparatively higher infant mortality rate, the prevalence of chronic conditions, long wait times in emergency rooms and to see specialists, poor availability of after-hours care, and a lack of reliable coverage for things like dental work and many prescription drugs.

The report’s authors cite the “markedly lower performance of Canada, France and the United States compared to the other countries, which all group relatively closely above the 11-country average performance score.” 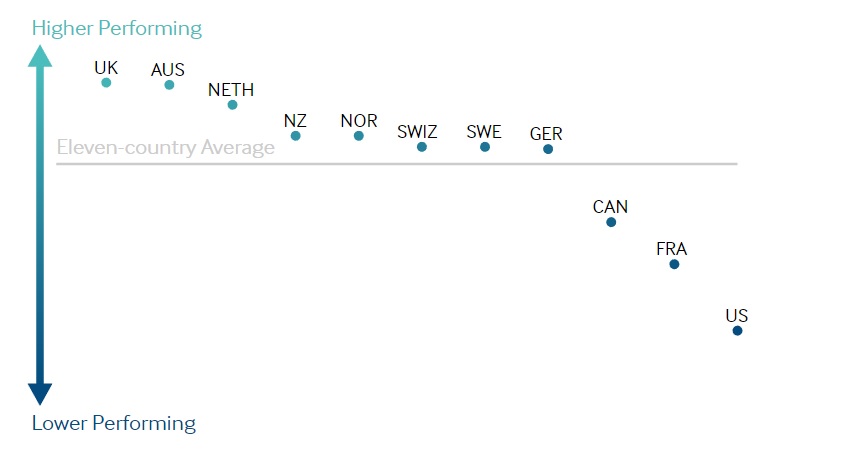 The document makes it clear Canadians are not getting value for money, spending the equivalent of 10 per cent of our GDP on health care in 2014. Meanwhile, many higher-ranked countries spent less and still managed to come out on top.

It’s certainly not all bad news, however.

Canada performed quite well on many metrics. The country has some of the lowest mortality rates for patients who end up in hospital following a heart attack, for example, and survival rates for certain types of cancer are also comparatively high. Unlike their peers abroad, Canadian doctors were unlikely to say that they wasted too much time on administrative tasks.

The survey results were drawn from a few sources. First, there are the Commonwealth Fund’s own international surveys of patients and doctors, conducted using widely accepted sampling and survey methods. Data was also drawn from the World Health Organization (WHO) and the Organization for Economic Co-operation and Development (OECD).

The Commonwealth Fund’s last review of the health-care systems across the 11 affluent countries, conducted in 2014, saw Canada ranked second-to-last, meaning we have jumped up one spot this time around.

But the authors themselves note that extremely small differences between scores and rankings on various metrics can easily bump a country up or down on the list. Results are often clustered closely together, with only a few percentage points separating Canada from all the countries above it on the list.

There were other limitations as well. In spite of improvements in recent years, the report notes, the availability of data on health system performance across nations “remains highly variable,” and the survey does not capture important information drawn directly from things like medical records or administrative data.

“Furthermore, patients’ and physicians’ assessments might be affected by their expectations, which could differ by country and culture … in general, the report relies predominantly on patient experience measures.”