Canadians will have to devote an unprecedented amount of their incomes to debt repayments, if interest rates return to normal levels, according to a new report.

“The financial vulnerability of the average household would rise to levels beyond historical experience,” the Parliamentary Budget Officer (PBO) warned today, based on projections about interest rates, household debt and debt servicing costs.

READ MORE: Canadians have more debt than ever, but fewer are going bankrupt. Why?

According to those forecasts, if the Bank of Canada (BoC) were to raise the key interest rate from the current 0.5 percent to 3 percent, the average Canadian family would have to use 16.3 per cent of its disposable income for debt repayments by the end of 2021.

How much interest rates could rise

Here’s how much interest rates could rise over the next few years, according to the PBO: 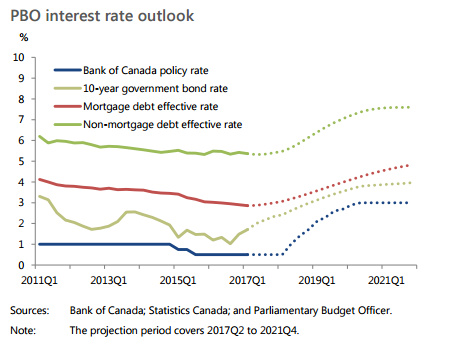 For a while at least, Canadians will keep borrowing, even if debt becomes more expensive, the PBO said.

“We expect household indebtedness to increase due to continued gains in real house prices and elevated levels of consumer confidence.”

As a result, by the end of next year, Canadians will likely owe $1.80 for every dollar of disposable income, up from the current $1.74. The PBO expects household debt to stabilize after 2018.

Canadians have kept their borrowing in check over the past couple of years, but didn’t quite stop piling on debt, the report suggests. As a result, household debt as a share of disposable income continued to grow, even if interest rates kept falling.

Now that rates are set to rise, Canadian households are on course to become more financially stretched than they’ve ever been before.