Seeking Asylum: Where do Somali asylum-seekers settle after a risky trek to Canada?

Seeking Asylum is a five-part Global News series focusing on asylum seekers’ journeys from entering the country to the challenges of starting a life in a new country.

In the wake of the U.S. President Donald Trump’s proposed travel ban and immigration crackdown, many people are leaving the states in fear of being sent back to their home counties.

Since January 2017, more than 250 people in the U.S. have illegally crossed the Canadian border to Emerson, Man., hoping to seek refuge. And with the weather warming up more more asylum seekers may start making the risky trek up north.

From Minneapolis to Canada

Some of the people making the journey include members of the Somali community in Minneapolis – specifically from the area known as ‘Little Mogadishu’, the Somali capital of America.

The tight-knit community, officially known as Cedar-Riverside, is tucked into the heart of Minneapolis. It’s surrounded by freeways, the downtown and the new Minnesota Vikings stadium. The neighbourhood has many ethnic groups that live there, including the biggest group –  the Somali population.

The small area is surrounded with Somali malls and East African restaurants (there’s even a Somali Starbucks). This is where people go to buy goods, have coffee and socialize. This is also where many Somali people meet up to try to get a ride up north to Canada to seek refuge.

While many Somali asylum seekers are making the trek from Minneapolis to Manitoba, it is still not clear if people are staying in the province or moving to other parts of Canada.

A 2011 National Household Survey shows a majority of Somali people living in the country settle in Toronto, Ottawa and Edmonton.  In 2011, the estimated population of people from Somalia living in Toronto was 21,445. The survey also showed around 44,995 people in Canada reported Somali ancestry. 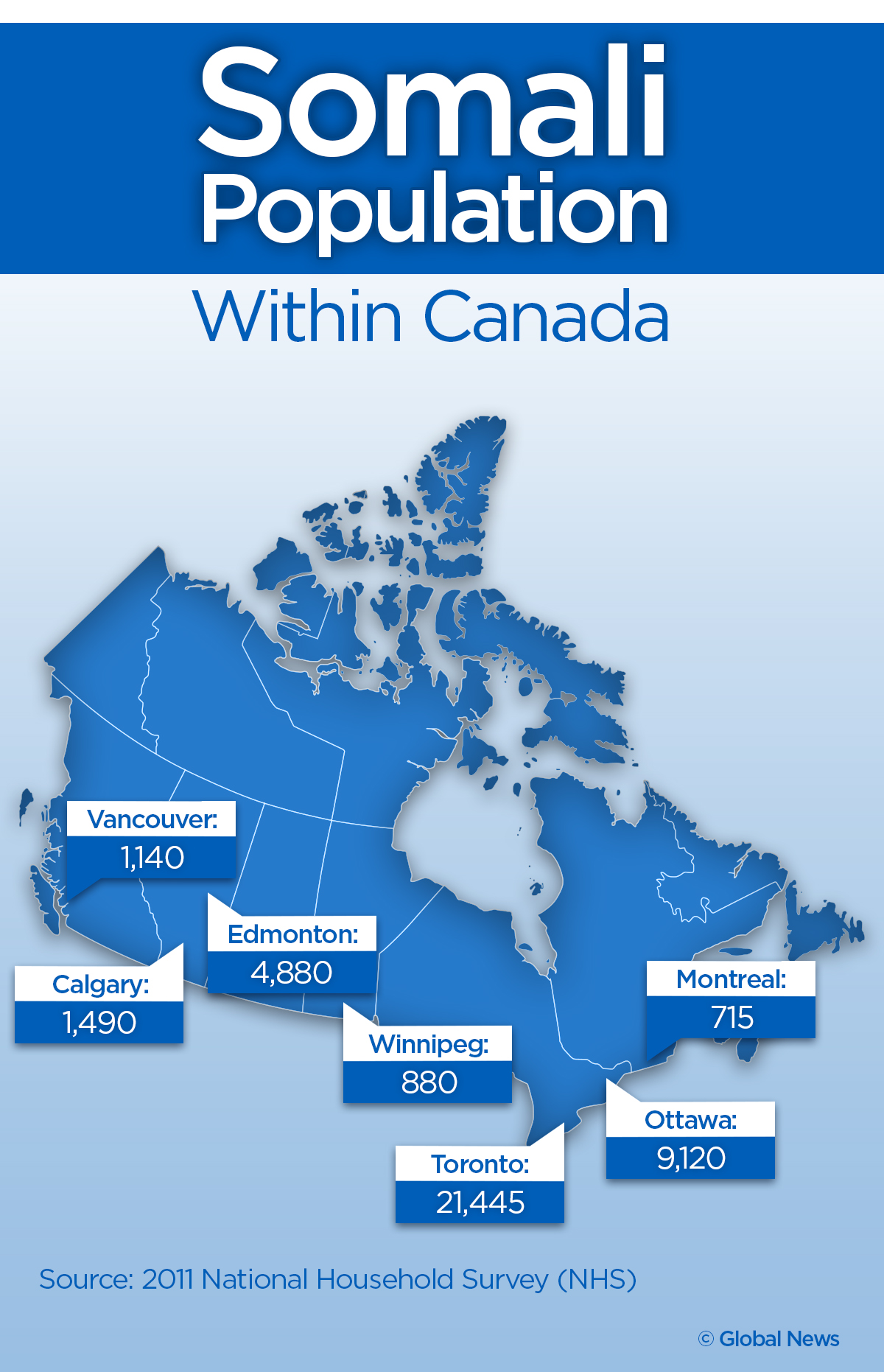 Osman Omar is a leader in the Little Mogadishu community. He said while many people in the area are fleeing north in fear of being sent back to Somalia – there could be some unwelcome asylum-seekers heading into Canada.

“When they come to this country some of them have committed a lot of crime,” Omar said. “Those are a big problem and they don’t have legal paper and they cross into the Canadian border.”

Omar believes Somalia pepople with criminal records are among the hundreds who are illegally crossing the Manitoba border.

READ MORE: Why Somalis are fleeing their country and seeking refuge in Canada

However, the federal government insists everyone who comes across the border is being thoroughly vetted.

“All of their data, biographical and biometric data is checked against Canadian and international databases to see if there’s any issue about criminality,” Canada’s Minister of Public Safety, Ralph Goodale said.

Lori Wilkinson, a sociology professor in Winnipeg, said even if there aren’t any criminal backgrounds, there is still the risk of of newly arrived people being recruited by criminal gangs in their new country.

That’s what happened in Winnipeg in the late 1990s and early 2000s. A notoriously violent gang emerged from the Somali community in the city. The gang grabbed national headlines in 2005, when a 17-year-old bystander, Phil Haiart, was shot to death during a drug war between rival gangs.

WATCH: Archive footage of Phil Haiart, 17, who was fatally shot in 2005

Wilkinson also said the link between refugees and gangs is so small, and overall not a huge problem.

“Canadians are just as vulnerable for gang recruitment, as gangs pick on people who are vulnerable,” she said.

In the long term the average refugee pays more in taxes than they will ever take out in social services, Wilkinson said.

“Sixty per cent of refugees come to Canada before their 29th birthday, which means they have a lot of time to go to school, learn the language and of course have a long labour market history that allows them to be productive, engaged citizens in our country,” she said.

READ MORE: UNICEF report finds nearly half of all refugees are children

Abdirahman Ali is a business owner in Little Mogadishu. He said the kind of violence Winnipeg saw in the early 2000s has not emerged in the community. The area is no more dangerous than other parts of Minneapolis, he added.

“They are hard workers, making businesses, just like other communities, so we’re doing well and we’re proud here,” Ali said.

LISTEN: 680 CJOB talks with the man known as the ‘mayor’ of Little Mogadishu