It was – 16 C Saturday morning but with a wind chill, it felt more like – 25 C and all you could see on the Bow River was steam rising and a few Canada geese.

The sole sign of life on the pathway near Fort Calgary was an occasional jogger, that is until, Calgary’s ice canoe team showed up.

The team was training for the annual Ice Canoe Races at Quebec City’s Winter Carnival in February.

“It’s a lot of fun and it’s really hard and it’s unique to Canada really. In Quebec especially, it’s a very big thing out there,” Barney McIlhargey, the team’s captain, said.

McIlhargey says they are the only team from  west of Quebec that regularly attends the races. He said that’s likely because of the cost. They train on an 25-year-old oversized custom made fiberglass canoe, but the team keeps what he calls, their “racing Ferrari” in Quebec.

The ice canoe is a more rigid and solid boat than a regular canoe, that can better withstand ice.  Team members have to be in great shape because it’s tough work paddling up stream and pushing the beast of a boat on and off the ice.

“We wear what you would wear for cross country skiing. Except, we have shin pads and we have neoprene booties and big spikes. You keep warm. You’re working so hard; it’s a very hard thing to do. I’ve played rugby for 20-years and I’ve never done anything that’s been as physically demanding as this,” McIlhargey said.

Getting wet is part of the sport too. Team member Willie Wice ended up with chilly feet after they launched the boat in the morning.

“The ice shelf is soft and you’re bound to go in but we wear neoprene booties so when they get wet, your feet will actually be a little bit warmer.  Took my first dip this morning so I am christened,” Wice laughed. 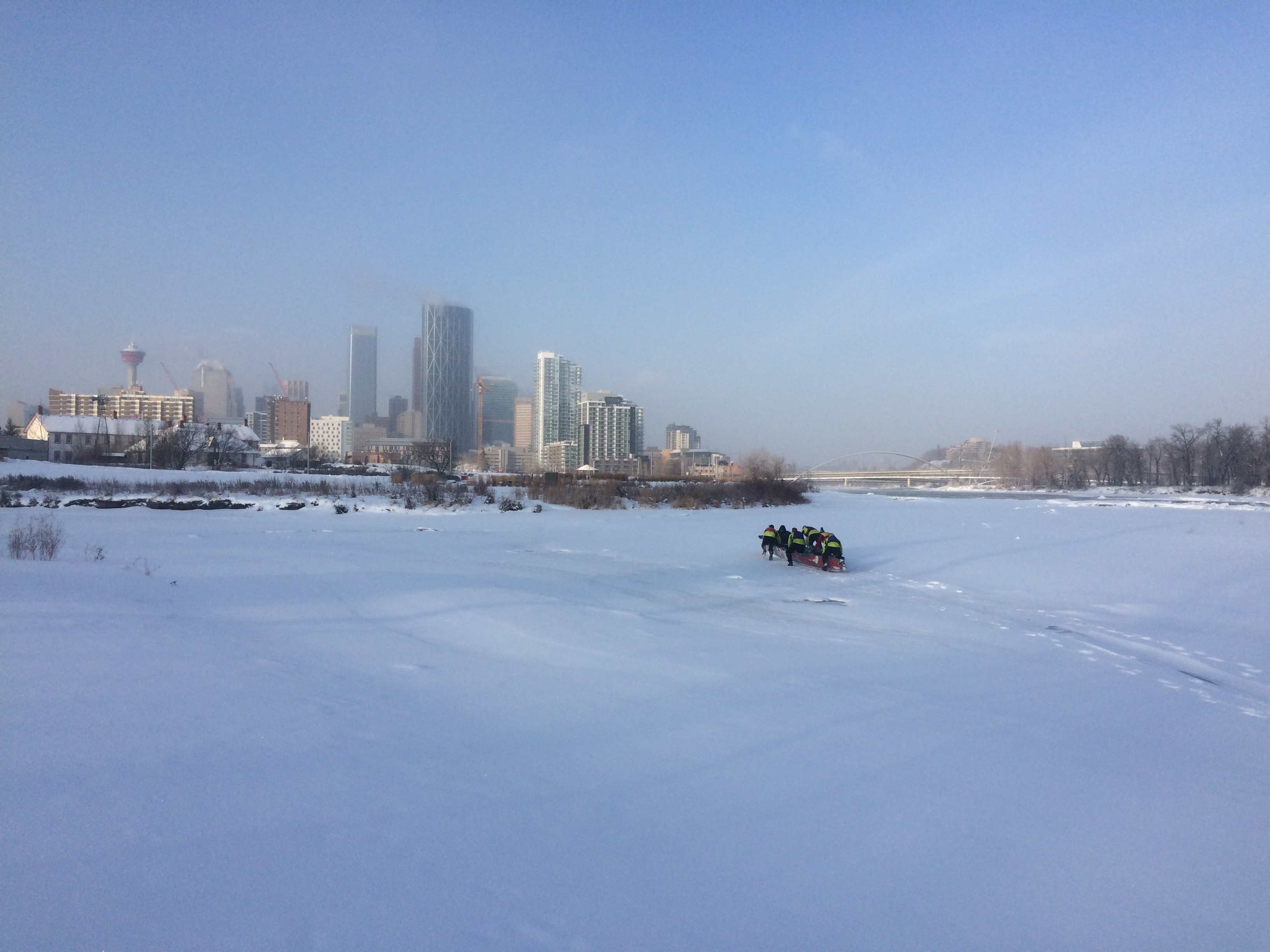 “It is risky. There is a lot of risk involved if you’re not a team that knows what it’s doing,” McIlhargey said. “The Bow River itself can be extremely dangerous because the water is moving fast and if anything goes wrong and you were to slip under the ice here in Calgary, you’re done.”

Portaging is the biggest risk. Team members say if everybody isn’t absolutely balanced the canoe can easily flip. If the ice cracks while they are portaging, members have to be ready to quickly jump on board.

“You can’t tell if the ice is thick or thin. If you do get out and you’re not being smart about it, you could go through. And if you let go of that boat and you go under the ice, you’re gone,” McIlhargey said.

Candace Bourque is the sole woman on the team. Like her captain McIlhargey, she too has experienced the chill of taking an unexpected plunge.

“There was one-time in Quebec, we were just plugging along and training and the next thing you know I just slipped on some ice and I got pinned under the boat and I was soaking wet. It was a frosty experience, but the cold didn’t set in until we stopped,” Bourque said.

So what propels her to take on the elements in such a demanding sport you might ask? It’s part, the teamwork, the challenge and part making the most out of the Canadian winter.

“It makes the winters go by super fast. Because the next thing you know February comes around and we’re racing and then March, it’s spring!” Bourque said. “It’s life-changing. It’s one of those really tough sports that gives you a new perspective on life.”

The Calgary team competes in Quebec City on Feb. 5.

Calgary has been entering an ice canoe team at the Quebec City winter carnival since 1968. 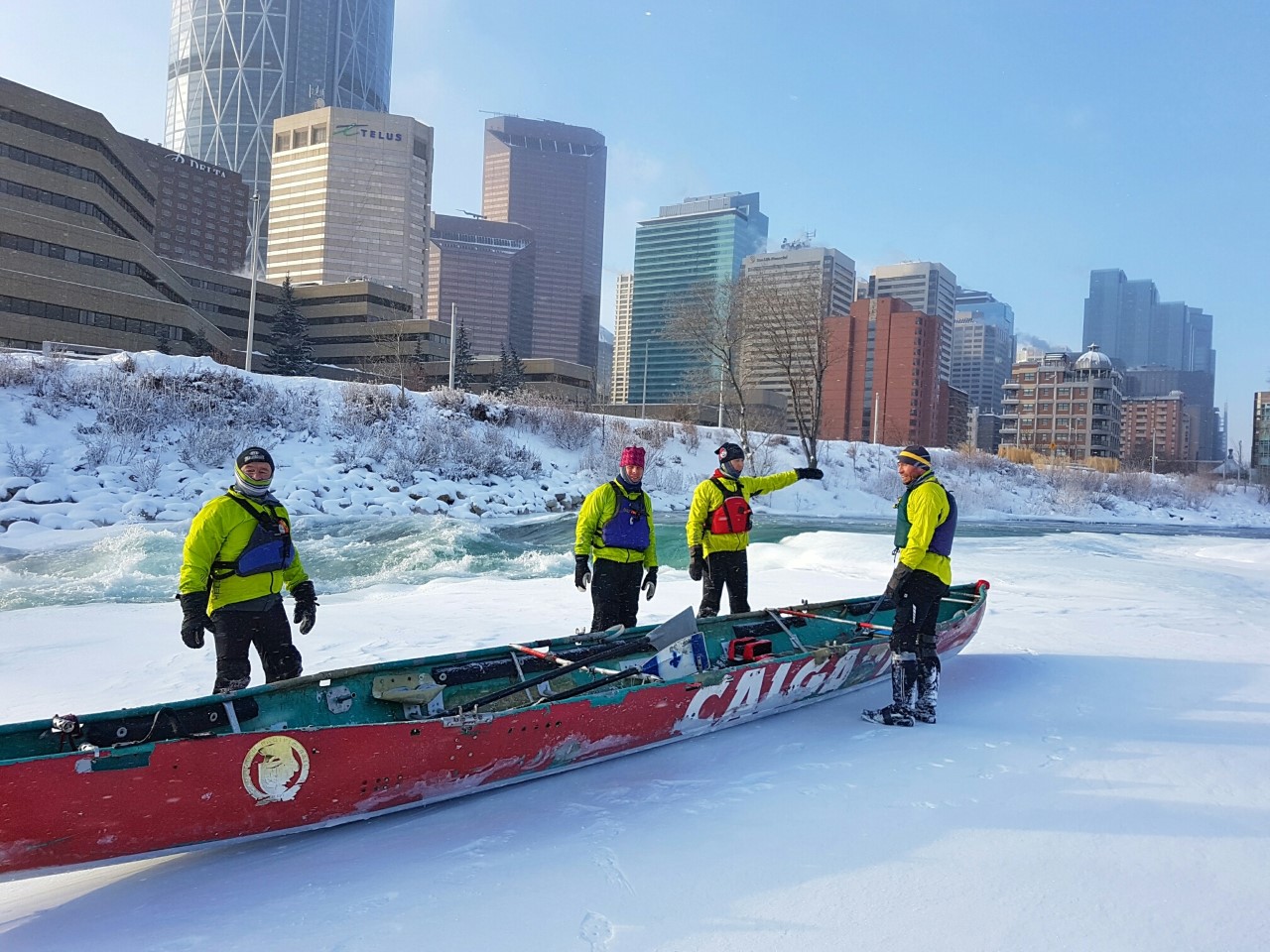