Fentanyl overdoses killed hundreds of Canadians this year, experts say 2017 could be deadlier

Last year in Vancouver, a firefighter’s primary job was putting out fires.

Firefighters located at Fire Hall No. 2, in Vancouver’s Downtown Eastside, responded to 1,255 calls in November to deal with the skyrocketing number of overdoses, said Dustin Bourdeaudhuy, the vice-president of Vancouver Fire Fighters’ union local 18.

“This month they are projected — if things stay on pace — they’ll be up to 1,600 calls,” he told Global News. “It’s unimaginable, nobody could have predicted this.”

Tweet This Click to share quote on Twitter: "This month they are projected — if things stay on pace — they'll be up to 1,600 calls," he told Global News. "It's unimaginable, nobody could have predicted this."

British Columbia has been ground zero for Canada’s battle against painkillers, as the province witnessed 622 unintentional overdose deaths from illicit drugs in the first 10 months of 2016, an almost 60 per cent increase over the same period in 2015.

Of those deaths, 332 have so far been linked to bootleg fentanyl, an opioid that can be up to 100 times more toxic than morphine.

WATCH ABOVE: Carfentanil found in provinces across Canada

As the deadly grasp of Canada’s opioid crisis continues to devastate communities, medical experts and first responders are warning that 2017 could be even worse as drugs like bootleg fentanyl and carfentanil spread eastward across the country.

B.C. declared a public health emergency in April due to the alarming rise in the number of overdose-related deaths. The dramatic rise in overdoses has taken a significant toll on firefighters and other first responders, who are now equipped to deliver the life-saving drug naloxone to help people who have overdosed.

“The stress level of seeing this human tragedy is taking its toll,” Bourdeaudhuy said. “To see this repeatedly day in and day out and to actually see the same people — in the same day, or back-to-back days, or week — has taken a huge toll on the mental health of our workers.”

The troubling trend of overdose deaths also hit Alberta hard, as 338 Albertans died from opioid-related overdoses between January and Oct. 27 this year, with fentanyl linked to 193 of those deaths.

Heartbreaking stories show the tragic consequences of opioid addiction from coast to coast, including four children who found their parents dead in a southwest Calgary home earlier this month. In October, a nine-month-old boy was rushed to hospital after suspected fentanyl exposure.

Global News has spoken with families in Ontario, B.C., Alberta, and Manitoba who have lost loved ones to fentanyl and opioid overdoses.

The family of Amelia and Hardy Leighton, a North Vancouver couple who died of a fentanyl-involved overdose in July 2015, has spoken out about the dangers of fentanyl.

“Fentanyl does not discriminate. It doesn’t matter what age you are, what drug you’re taking, what setting you’re in, what gender you are. It can kill you,” Julian Brumec-Parsons told Global News in July following the death of his cousin Hardy.

The Leightons, both in their 30s, were found dead in their rental home leaving behind two-year-old son, Magnus.

“We have to be prepared to tell him the truth and do everything we can to make sure his accepts it,” Brumec-Parsons said. “No one deserves that. [He’s] an innocent bystander in this whole thing. His parents paid the ultimate price, and now he suffers because of it.”

Tweet This Click to share quote on Twitter: "We have to be prepared to tell him the truth and do everything we can to make sure his accepts it," Brumec-Parsons said. "No one deserves that. [He's] an innocent bystander in this whole thing. His parents paid the ultimate price, and now he suffers because of it."

Medical experts say they are concerned overdose deaths could increase in 2017 as bootleg fentanyl has begun to appear more often in provinces like Ontario and throughout Atlantic Canada.

As Global News first reported in October, new statistics from Health Canada showed an increase of more than 40 per cent in the number of street drugs testing positive for fentanyl across the country this year compared to last.

The incredibly potent opioid carfentanil, up to 100 times more toxic than fentanyl, has also begun to appear in several provinces. Just 20 micrograms of the deadly drug, the equivalent of a single grain of salt, could be enough to kill a person.

Dr. David Juurlink, head of clinical pharmacology and toxicology at Sunnybrook Health Sciences Centre in Toronto, said the state of emergency declared in B.C. is a testament to the severity of the opioid crisis in Canada.

“It’s not hard to make a case that other jurisdictions in Canada, particularly Alberta, are in the midst of an emergency, even if they haven’t declared one publicly,” Juurlink said. 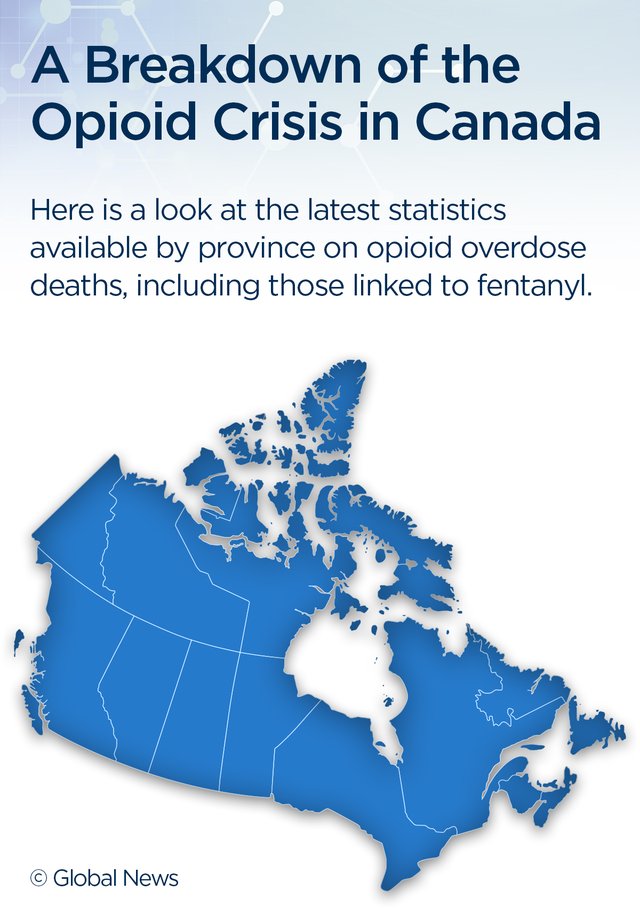 He added that while the problem of overdoses has been more severe in western Canada, things are expected to get worse for eastern provinces like Ontario and Nova Scotia.

“I think this is going to be a trend we see continue as drugs like fentanyl and carfentanil continue to metastasize eastward across Canada,” he said. “There’s no stopping that. It is not possible.”

“What is going to happen [in 2017] is we are going to continue to see people dying from fentanyl and carfentanil.”

Dr. Karen Grimsrud, Alberta’s Chief Medical Officer of Health, told Global News the province is “very concerned” about the emergence of carfentanil that has killed at least 15 people in the province.

“Fentanyl has been the one drug that we’ve been really focusing,” Grimsrud said. “We’ve made a concerted effort here to look at the bigger picture of illicit opioids in general.”

“We may see in the next year a different drug come in and see less fentanyl use, but another synthetic opioid that has a larger impact, such as carfentanil.”

Strang said so far this year 48 people have died due to opioid overdoses, with two deaths related to fentanyl.

“We have an ongoing issue with opioid overdose deaths, and we are starting to see some indications of the appearance of illicit fentanyl in Nova Scotia,” Strang said. “It’s quite startling.”

While hundreds have died across the country in 2016, the true extent of Canada’s opioid crisis remains unknown because of the lack of up-to-date statistics and the different methods provinces use to track overdoses.

Alberta and B.C. have overdose statistics available from 2016, while Quebec’s latest data is only from 2014. In Ontario, more than 700 people died in 2015 from opioid overdoses but that information wasn’t made available until September 2016.

The outdated or incomplete information makes it difficult for health experts and policy makers to design effective responses to the problem, said Michael Parkinson, a drug strategy specialist with the Waterloo Region Crime Prevention Council in Ontario.

“It’s very difficult to respond to what is not being measured,” Parkinson said. “Local communities are attempting to patch together some kind of response when overdose outbreaks occur, but it is a response that stands in stark contrast to the way we respond to other but less common forms of death.”

Parkinson said the absence of a co-ordinated system has long been identified as a chronic problem in treating overdoses.

“In 2016, it’s become even more of a problem due to the emergence of bootleg fentanyl where you see very high number of overdoses occurring in short period of time.”

Tweet This Click to share quote on Twitter: "In 2016, it's become even more of a problem due to the emergence of bootleg fentanyl where you see very high number of overdoses occurring in short period of time."

How has Ottawa responded?

4:08 New bill aims to reframe problematic substance use in Canada

In response to the growing health crisis, the federal government announced it is taking steps to make it easier to set up supervised drug injection sites in Canada while cracking down on illicit shipments of fentanyl and the import of equipment used to make pills.

“The opioid crisis has taken a toll on many communities across Canada. Our renewed, evidence-based approach to Canada’s drug strategy will allow the Government to better protect Canadians, save lives and address the root causes of this crisis,”  Philpott said in a statement.

Philpott says the new law would make it easier for such sites to be established, provided they can demonstrate a compelling public health need and a lack of risk to public safety.

The new legislation would also lift a restriction that prevents border guards from inspecting packages that are under 30 grams in weight, provided they have reason to believe the packages contain illegal drugs.

“From the federal level we have seen movement on a number of different initiatives that are long overdue,” said Parkinson. “But there is much more to be done.”

Last month, Health Canada announced it plans to restrict six chemicals used to make fentanyl, while the RCMP announced in November it will work with China’s Ministry of Public Security to curb the flow of opioids.

However, when it comes to drugs like carfentanil, Juurlink says it will be difficult for the RCMP and border agents to prevent them from entering Canada.

“You can fit hundreds of thousands of doses into something the size of a bar of soap. Good luck stopping that at the Canada Post or CBSA,” he said. “Carfentanil to me is a weapon. It’s the sort of thing that could be used by terrorists.”

– With files from the Canadian Press and Rumina Daya