‘I knew something was wrong’: Couple learns they’re having conjoined twins in ultrasound image

It was an ultrasound that changed Chelsea Torres’ life: the expectant mom saw the image of her unborn twin babies — joined at the chest and stomach with their pelvises fused together.

Doctors delivered the fateful news to her and her husband: they were having conjoined twins.

“He came in and asked me if I was bleeding or cramping. I knew something was wrong when he was asking me that and he just told me my babies were stuck together, they were conjoined,” Torres told Global News in a phone interview.

The mom, from Blackfoot, Idaho, couldn’t believe what she had heard. It wasn’t until a follow-up ultrasound at the 10-week mark that the gravity of the situation sunk in.

“I thought it was just a scare, I thought they were just really really close, they were just little things growing. But they confirmed it. When we found out, we were shocked and it took three days for us to get out of it and move on with our lives,” Torres explained.

She and her husband have decided to keep the twins. She’s even picked out names for the two unborn sisters: Callie and Carter. 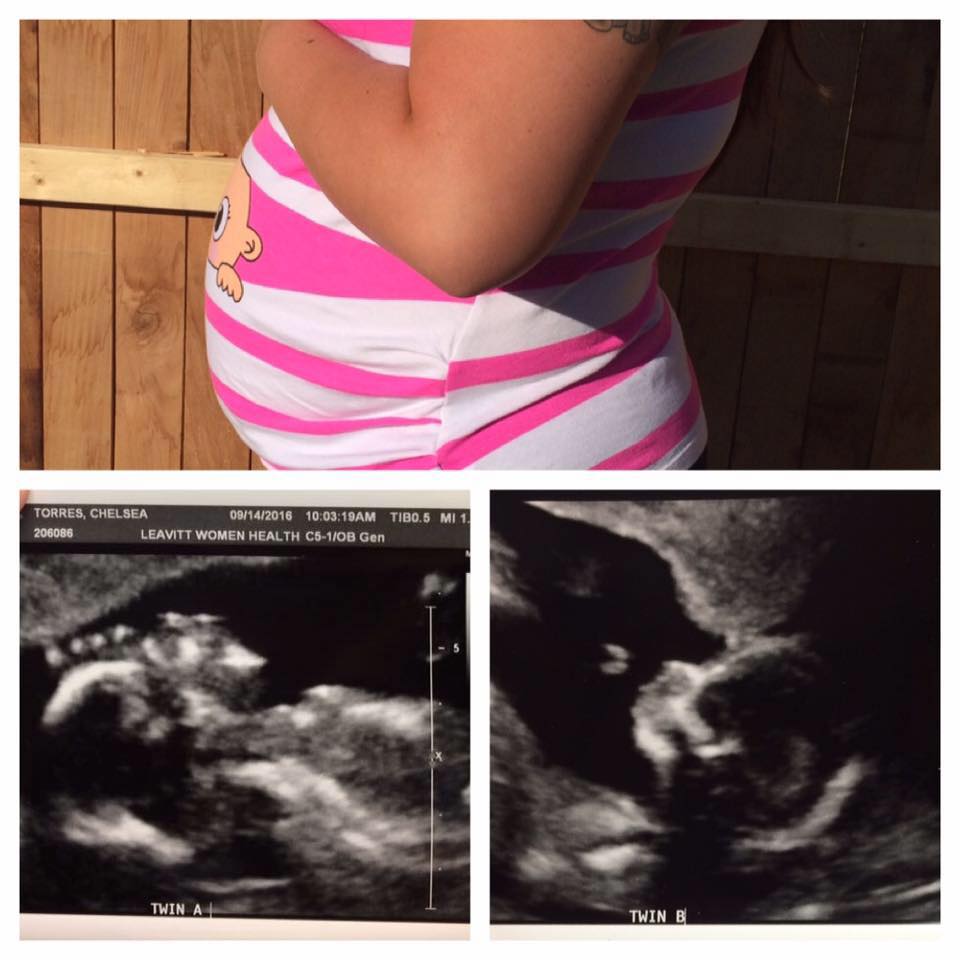 She learned she was pregnant on June 17. She’s about three months into her pregnancy now.

It’s been a tumultuous ride for Torres. With her firstborn, three-year-old Jaysin, she had an emergency C-section after she went through severe cramping and bleeding. Her son “died” and was brought back to life, but Torres suffered from scarring and tearing in her uterus, she said.

She didn’t think she could conceive again.

By June, she learned she was pregnant but no baby or heartbeat was detected at the one-month mark. A few weeks later, the ultrasound images explained everything.

“They told us I could move forward and it might be a danger for me to have a multiple baby pregnancy. With twins there’s way more risk here and it’s a repeat C-section,” she said.

Then there’s the babies’ health, too:

“They may die, they may make it. If they make it to [full-term], they may die. It’s been up in the air,” Torres said.

Doctors gave her the option to terminate the pregnancy but she and her husband said it wasn’t an option.

Now, they’re figuring out how to give Callie and Carter their best chances at survival. For starters, they’re moving from Blackfoot, Idaho, to Houston, Texas, in the next few weeks to get specialist help with their unusual pregnancy.

They’re also fundraising to help cover Callie and Carter’s medical expenses. When Jaysin was in hospital for nine days in the neo-natal intensive care unit (NICU), the family’s bill crept up to $200,000. They’ve set up a GoFundMe page and Facebook account.

In briefings, Torres has been told that doctors tend to keep conjoined twins together for months until it’s safe to carry out an operation to separate them. With that in mind, her babies could be in hospital for months.

In the meantime, Torres can’t work either. She’s been put on bed rest and she can’t lift heavy objects in case she hurts her growing babies.

“I just want to take care of myself and make sure they’re healthy,” Torres said.