One more Canadian tourism spot has been added to UNESCO‘s World Heritage List.

Mistaken Point in eastern Canada is one of 21 new additions to be deemed of “outstanding universal value” this year.

The 17-kilometre narrow stretch of rugged coastal cliffs, found at the southeastern tip of Newfoundland, is a fossil site. And not just any fossil site. According to UNESCO, it is “the oldest known assemblages of large fossils anywhere.

“These fossils illustrate a watershed in the history of life on earth: the appearance of large, biologically complex organisms, after almost three billion years of micro-dominated evolution.”

READ MORE: Cheapest places for Canadians to fly to

It’s the 18th site in Canada to be added to the list since 1978, and the third to be located in Newfoundland.

Canada’s east coast is home to the majority of the country’s World Heritage sites. But B.C., Alberta and the Northwest Territories are also brimming with them.

You can see the full list in the infographic below. The sites are numbered based on the order in which they were recognized.

To make the list, a site has to meet at least one of 10 selection criteria, which includes “containing superlative natural phenomena or areas of exceptional natural beauty.” 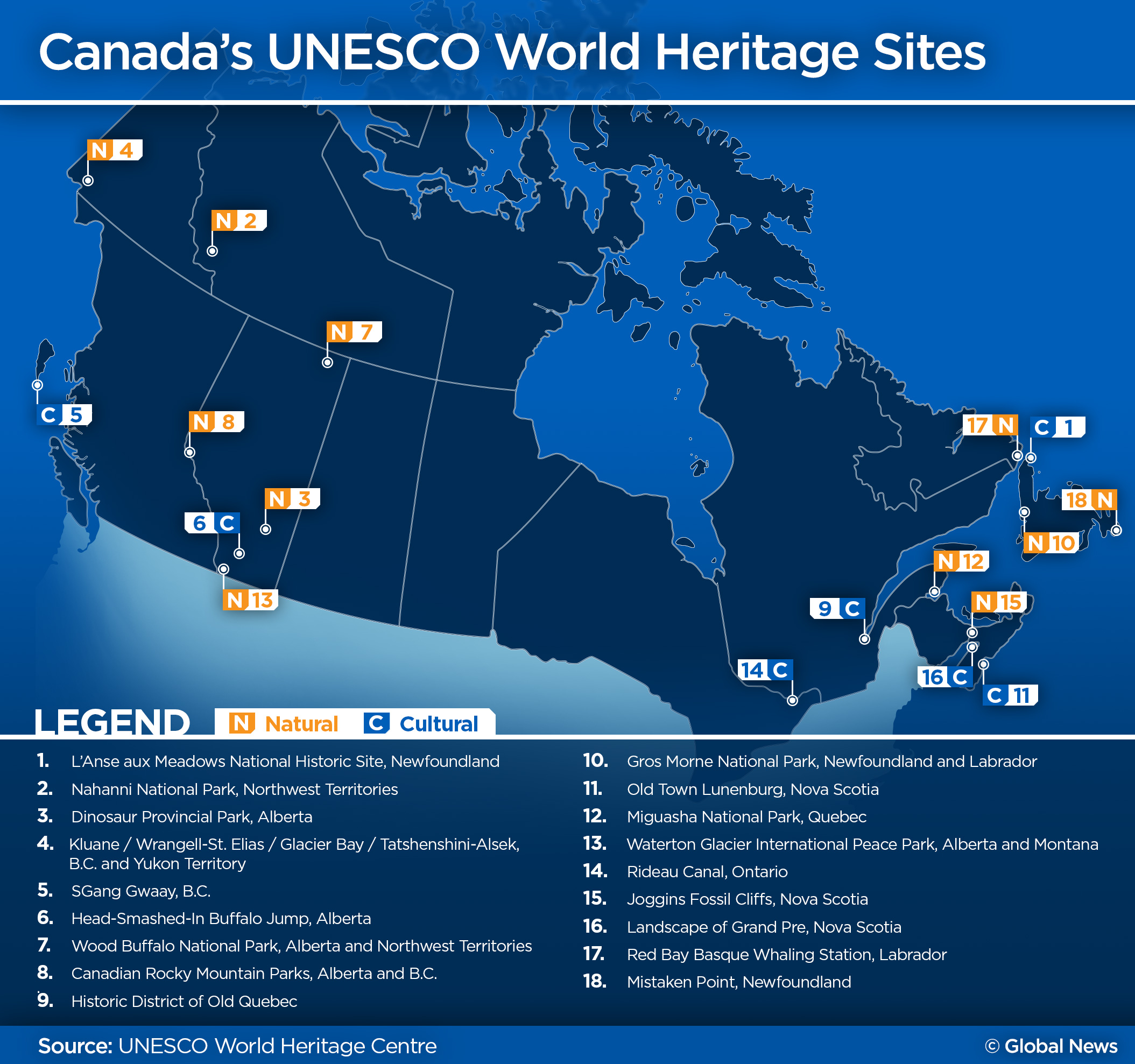 You can learn more about each site and what makes it so special on UNESCO’s site.

Old Town Lunenburg on Nova Scotia’s southern coast is one the dozens of World Heritage Sites at risk of being destroyed due to climate change, according to a United Nations report released in May.

Lunenberg is considered by UNESCO to be the best example of a planned British colonial settlement townscape in North America. More than 1.8 million tourists visit the province annually and tourism revenue on the south coast exceeds $ 160 million a year, with Lunenburg being one of the top destinations, according to UNESCO. Rising seas threaten reportedly threaten the area.

READ MORE: Most dangerous countries for Canadians to travel to include popular hot spots

Last year, there were concerns raised that the ancient Syrian town of Palmyra was at risk from ISIS attacks.

The world heritage site is rife with ancient ruins and, according to the UNESCO website, “contains the monumental ruins of a great city that was one of the most important cultural centres of the ancient world.”

Other UNESCO sites to be recognized this year were in Iraq, Iran, Chad, China, Sudan and Mexico.