Dog given back to Edmonton owner after biting twin girls

WARNING: The following article contains graphic photos and details that may be disturbing to some readers.

Holly Mears is a mother on a mission after learning the Old English Bulldog that attacked her four-year-old daughters is back with its owners.

On May 5, Mears’ twins, Kaylee and Jenna, were leaving a garage sale in Vegreville, Alta. with their grandmother when the dog allegedly ran from the yard into the garage and jumped on them from behind.

She said the dog attacked Jenna’s face and her grandmother fought the dog off. Then, Mears was told it turned to Kaylee, biting her lip and neck.

“One went through her lip and the other one was a few inches away from her jugular vein.”

Then the dog came after Jenna one more time before the people pet-sitting it got it under control.

An ambulance was called and the girls were taken to the Vegreville hospital, where Kaylee’s face was glued and stitched back together.

Jenna, however, required more serious surgery and was transported in another ambulance to the Stollery Children’s Hospital in Edmonton.

“We had three plastic surgeons waiting for us. We were in the operating room within half an hour. Her tear-duct was ripped open. They weren’t sure what was going to happen with her eyes,” Mears recalled.

“Her nostril was not attached anymore. The cut on her upper lip was right to her jawbone. The chin area was a direct bite, then there was a bite underneath her chin.”

Mears feared her daughter would be permanently disfigured.

The twins grew up with a Golden Labrador, but now, they’re terrified of dogs.

“If a dog makes a sudden movement, they jump at people’s legs to hide.”

Community Peace Officer, Ken Podoborozny, said after the attack, the dog was apprehended by RCMP officers and put into quarantine.

“In my 26 years of enforcement, I’ve never seen such a severe bite in this community.”

On June 15, a judge ruled the dog, named Jake, must go for a behavioural assessment by an independent dog handler.

A trainer at Passionate Paws in Stettler, Alta. will put Jake through tests for a minimum of one full week.

The assessment will include socialization with other animals, as well as people.

According to the dog’s owner, Pattie Kisilevich, Jake has not yet been taken to Stettler because he is “decompressing” after being locked in quarantine for seven weeks.

She said he is constantly shaking as a result of being locked up for so long.

For now, he is at home in Edmonton with Kisilevich and her husband Terry. They were on vacation at the time of the attack and a family member was dog-sitting.

Jake is not being walked and has a number of conditions, including being muzzled and in a secure location where he cannot escape.

The bulldog has been banned from Vegreville until further notice.

“If there are any tendencies, we know what we need to do. But we want him to have a fair chance.”

She said Jake is three years old and this attack is completely out of character, adding he is usually good with children.

The Kisilevichs were charged under the Dangerous Dogs Act twice, once for each victim. 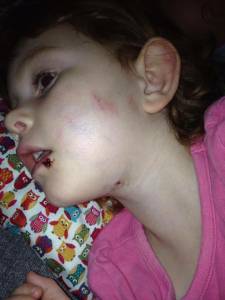 After the behavioural assessment, the case came back before the judge to determine Jake’s fate on Aug. 17. The judge scheduled a hearing for Nov. 8 in Vegreville.

Mears is hoping for one outcome.

“I just want to make sure that the dog gets euthanized so it’s not a danger.”

She started a petition she wants to present to the judge, hoping to sway the decision.

“It’s frustrating that I have to do this,” Mears added. “But, at the end of the day, if I watched the news and saw that this dog mauled [or] killed another child and I did nothing, I would have to live with that guilt.”
Story continues below advertisement
Follow @SarahNKraus
Related News
© 2016 Global News, a division of Corus Entertainment Inc.