A major Vancouver developer is offering young British Columbians trying to get into the housing market a number of large incentives, including cutting a down payment and first-year mortgage payments in half.

The complex under preconstruction, Concord Burnaby, is just to the east of Brentwood SkyTrain station, at Lougheed Highway and Beta Avenue.

People under the age of 35 who have lived in B.C. for two years, are Canadian citizens or permanent residents, and have never owned an interest in a residential property can apply for the program this weekend. 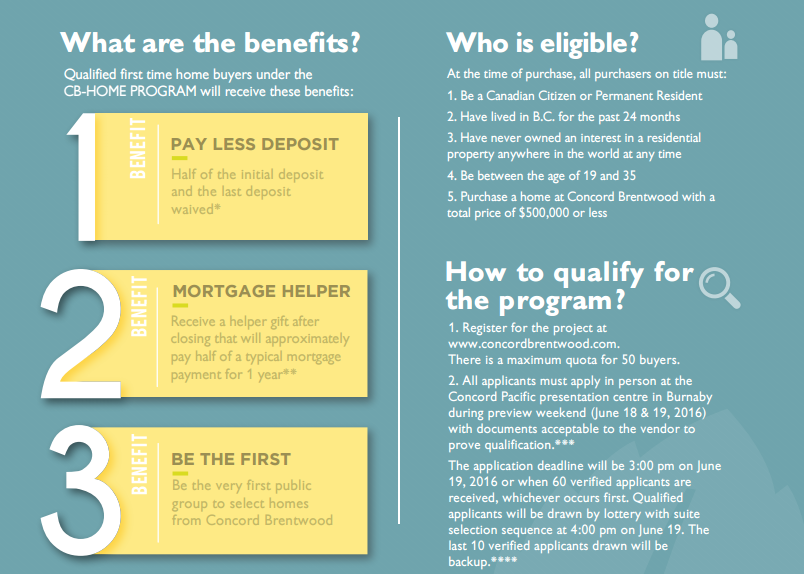 “This will be to address the concern that local B.C. residents don’t have access to the market in a first-time buying configuration,” said Peter Webb, senior vice president of development at Concord Pacific.

“It’s a pilot project for us, we’re all going to watch it for a while and see how it works out, but it’s the first time the private sector has made an effort to try and assist in what is becoming a point of discussion in Vancouver.”

But Thomas Davidoff, a UBC real estate economist, says having such large incentives for first-time homeowners isn’t in itself a good thing.

“I would see this more as a concerning sign than a nice thing that’s helping people get into the market,” says Davidoff, who believes it could be a sign that entry-level apartments are becoming difficult to sell.

“Buyers are really stretching liquidity…I don’t want to say it’s scraping the bottom of the barrel, but it’s a bit of [a] concern that the builder believes first-time buyers are really struggling to get into the market.”
Related News
© 2016 Global News, a division of Corus Entertainment Inc.