Family pays it forward to help others amid health crisis

SASKATOON – An unexpected health crisis over Christmas has turned one family’s entire life upside down.

Cauahtemoc Lopez Ramirez and Rachelle Daley flew into Saskatoon on Dec. 19 to spend the holidays with Daley’s family. At that time, they had no idea they would be here to stay.

“It was actually a good thing that it happened while we were here because we had somewhere to stay, we had someone to take care of us.”

According to Daley, there was absolutely no sign there was anything wrong with their little 15-month-old daughter Izel until they discovered drops of blood in her diaper during a diaper change.

The couple immediately went to Royal University Hospital’s emergency room and were told it was probably just an infection.

“The drops turned into clots and quite a bit of bleeding, like filling her diaper so we went back on the 27th and that’s when they did the ultrasound and found the tumour.”

Specifically, a Wilms’ tumour which is a rare kidney cancer that primarily affects children. Also known nephroblastoma, Wilms’ tumor is the most common cancer of the kidneys in children.

Children ages three to four are the most commonly affected age group and becomes much less common after age five.

“There’s good days and bad days so there’s obviously something we have to learn here so we’re trying to figure that out,” said Rachelle Daley.

In addition to the tumour, the couple was also told little Izel had a suspicious nodule on her lung. After surgery, results show her lung is cancer-free and the family says they’re preparing themselves mentally for the other results after a sample of their daughter’s tumour was sent away.

“There was some discrepancies as to whether it was stage one cancer or stage two and that will determine treatment options,” said Rachelle Daley.

The couple has been told that the best case scenario would be if it is stage one cancer, in which case health care providers will have to carefully monitor Izel. In a worst case scenario, she will need to undergo eight to 18 weeks of chemotherapy and at this point, treatment options for stage two haven’t been discussed.

“We’ll get it [results] back on Tuesday and we’ll find out what treatment we’ll be doing with her.” 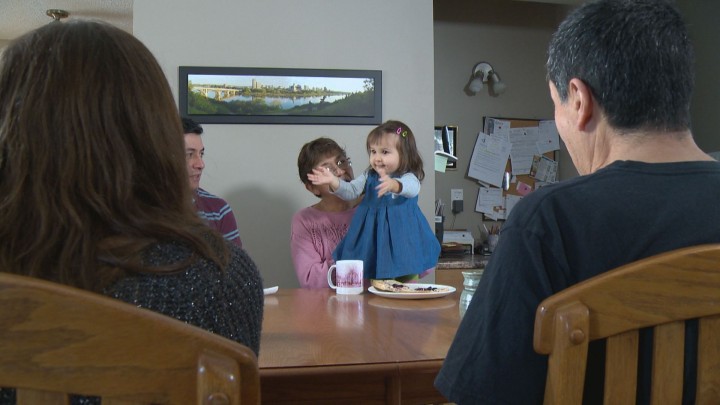 Their entire life back in Ontario has since been packed up into boxes and shipped to Saskatoon. Daley says her daughter’s health is more important than her master’s degree in communication which is why the family of three was residing in Waterloo.

More than $10,000 has been raised on a GoFundMe page to help with expenses. The couple say they plan to pay it forward by donating a portion of the money to the Children’s Hospital Foundation – Acute Care Pediatrics.

“When we were in the hospital, we saw a lot of kids and parents that were going through worse things than us so you can only feel sorry for yourself until you see worse things,” said Rachelle Daley.

They encourage others to get into the same spirit of giving and help make a sudden hospital stay for a little one and their family a little more comfortable, especially at a time when they could use it the most.