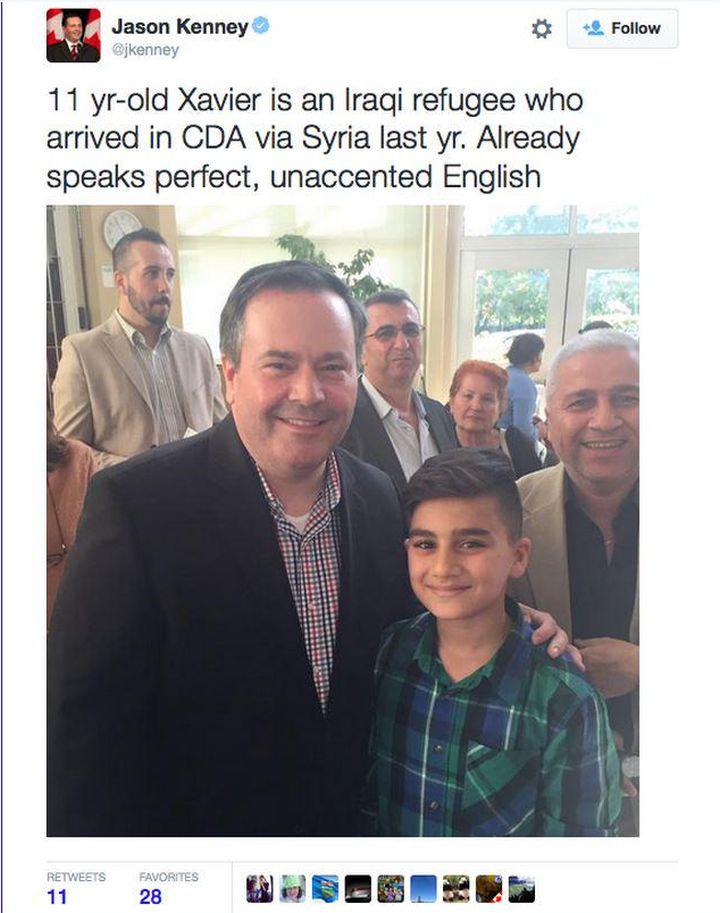 Kenney posted various tweets (below), describing the refugees he met with Monday afternoon, but the above tweet was quickly deleted.

1/ Met the Kreshat family, who were forced to flee Mosul following ISIL's invasion last year. They arrived in CDA pic.twitter.com/Q1XCnF1ZLV

2/ in March, & got refugee status from the IRB in July, thanks to our reform of the asylum system:wait times for claimants used to be ~2 yrs

3/ Young Senta & Carlos Kreshat told me they hope to be doctors when they grow up! pic.twitter.com/nZS9MvBdww

Canadian voters reacted with varying degrees of disdain and good humour, questioning what his public comments might imply for other Canadians.

“unaccented English” …What? Does that imply those with an accent are lesser Canadians or less deserving of praise? https://t.co/P3WLUnAATC

.@jkenney I have a gay lisp. Does this count as unaccented English? #elxn42

When I arrived in Canada from South Africa at age 10 I was bullied into switching to “unaccented English.” Thanks? https://t.co/PHr3o0rMhO

I'm sure all the French Canadians in Canada speak "perfect, unaccented English" as well https://t.co/3W0gqOZLP1

As a teacher, as a human being, this is insulting on so many layers. What is perfect, unaccented English? #elexn42 https://t.co/ZlDCFzsVhF

A request to Kenney’s office for comment was not immediately returned, but the defence minister answered one Twitter user who asked, “So, anyone with an accent isn’t a real Canadian?”

In a series of four tweets, Kenney replied:

“Of course not. I have a serious accent when I speak French! I simply found it remarkable that a youngster who did not speak a word of English a year ago has learned so quickly that he sounds like he grew up in Canada. I meant it as a harmless observation about how quickly a refugee child has taken to living in Canada. I have deleted the tweet as some people were misconstruing it, and I don’t want the boy to be subject of any controversy.”

The incident comes four days after Calgary Mayor Naheed Nenshi’s tweets turned another of Kenney’s comments into a trending hashtag.

Kenney said in an interview last Thursday it’s “unfortunate that some politically correct liberals have rushed to the defence” of the niqab.

READ MORE: Nenshi fires back at Kenney for comments on niqab ban

“It seems to me that it’s the mayor and people like him who are politicizing it,” Kenney is quoted as saying.

The Tories were also slammed Friday, after Immigration Minister Chris Alexander reminded people about last November’s “Zero Tolerance for Barbaric Cultural Practices Act,” and announced a proposed RCMP tip line where people would be able to report any “incidents of barbaric cultural practices in Canada.”

A few social media users took it as an opportunity to sarcastically call out the government for anything they deemed “barbaric” using the hashtag #BarbaricCulturalPractices.

Some poked fun at the prime minister himself, but many used the hashtag to criticize the attention drawn to aboriginal rights and the high numbers of missing and murdered aboriginal women.

Hey @pmharper do residential schools, Islamophobia, and race-baiting count as #BarbaricCulturalPractices? Asking for a friend.

With files from Global’s Rebecca Joseph