NDP lead shrinks to one point across Canada: Ipsos poll

Just three percentage points separate first place from third in the race to form the next federal government, according to a new Ipsos poll, which suggests the NDP lead has shrunk to just one percentage point.

The NDP’s lead over the other two parties fell two points to 32 per cent since last week. The Liberals picked up a point, reaching 32 per cent support, and Tories remained in third at 29 per cent.

So not much has changed nationally. But regionally, the Liberals are making gains in some key provincial battlegrounds.

“The Liberals are up a fair amount from the last poll last week but all three parties are still pretty competitive,” Darrell Bricker, CEO of Ipsos said. “The only way the Conservatives can really win this election campaign, I guess the same applies to the Liberals too, is if they have a big breakthrough in Ontario. So far, nobody’s achieved that.”

The NDP still dominates Quebec with 38 per cent support. Though its lead over the Liberals, who are at 26 per cent, has narrowed. And that’s a problem for Mulcair, Bricker said.

“For the NDP, the real problem is that the Liberal party isn’t going away and that there is no consolidation taking place right now behind the NDP vote, so in fact, Thomas Mulcair isn’t really doing any better than Jack Layton did in the last election campaign,” Bricker said. “In Ontario, the NDP is not the factor that they need to be in order to contemplate winning a majority.”

The Bloc Quebecois, Conservatives, and Green Party are next with, 17, 16, and two per cent, respectively. 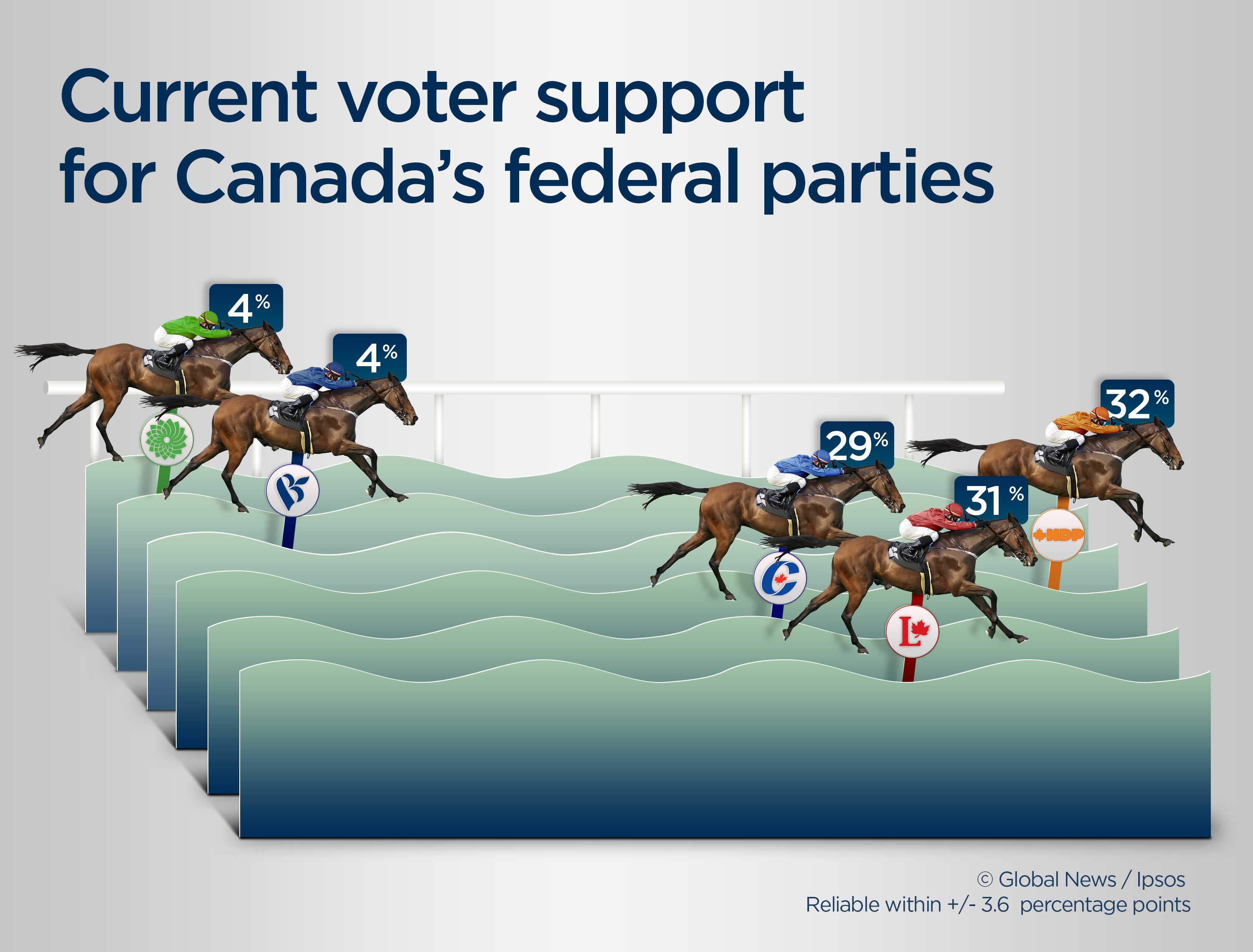 Though the Conservatives are in third nationally, their base of support in Alberta is strong and still 14 percentage points ahead of the NDP, which enjoys 31 per cent support province-wide.

British Columbia remains the closest provincial race in the country with the Conservatives and NDP statistically tied at 35 and 34 per cent support, respectively. The Liberals are in third with 25 per cent support.

“In British Columbia, the Conservatives are actually back on top, but just slightly,” Bricker said.

“The NDP is definitely in the race in British Columbia and are leading the way when it comes to progressive voters.”

But while the overall horse race numbers haven’t moved much, Canadians’ support for the government has improved slightly.

When asked who would make the best prime minister, 32 per cent said Harper, tying him with Trudeau. They’re still behind Mulcair who is at 36 per cent, but the numbers are changing. Over the last week, Harper gained three points, while Mulcair lost three. And this metric, Bricker said, is usually telling of future changes.

“So what you see right now is a very, very clustered race, all the way down the list of any questions we could possibly ask. Nobody really breaking out at the moment and nobody making an error that they couldn’t recover from.”

-With files from Eric Sorensen

Exclusive Global News Ipsos polls are protected by copyright. The information and/or data may only be rebroadcast or republished with full and proper credit and attribution to “Global News Ipsos Reid.” This poll was conducted between September 11 and September 13, with a sample of 980 Canadians from Ipsos’ online panel and is accurate to within 3.6 percentage points 19 times out of 20.