Scores of house hunters who once harboured dreams of owning a single-family home in some quiet, middle of the road neighbourhood in and around Vancouver one day have likely given up.

At least Silicon Valley millionaires still have a shot.

The benchmark price of a single-family home in the greater Vancouver area stretched above $1.1 million for the first time last month. That hefty sum puts your standard, pedestrian bungalow in the Vancouver area on the same level as a property in and around San Francisco, a city that apparently teems with high-tech millionaires.

MORE: Poll says many would struggle if mortgage payments lifted

Single-family home prices in Vancouver “sizzled” another 14.2 per cent in May (compared to a year ago), and have now doubled in the past decade, according to BMO economist Robert Kavcic.

“For a suitable comparison you need to look at another very attractive, land-constrained city, San Francisco, where the median price of a similar property doubled from 2000 to 2006 and nearly again from 2009 to the present,” Kavcic said in a note on Tuesday.

“A home there will also set you back more than US$1 million.”

As Kavcic points out, smack in the middle of those meteoric housing booms sits a 45 per cent correction which occurred during the U.S. housing bust in 2008. Here’s the economist’s chart comparing the growth of single-family home prices in both cities: 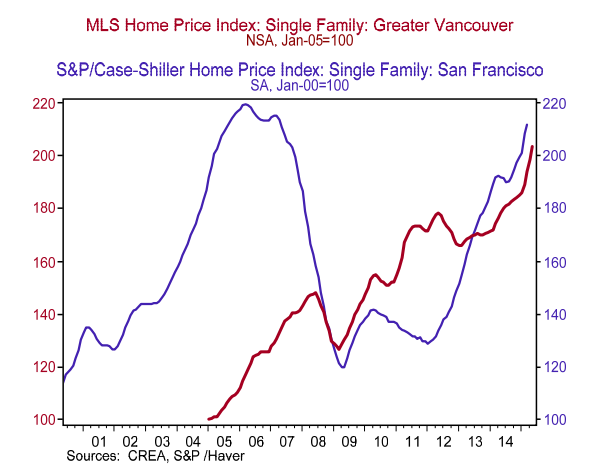 And here’s a look at how benchmark single-family home prices in Vancouver compare to other big Canadian markets: View link »
Story continues below advertisement
Related News